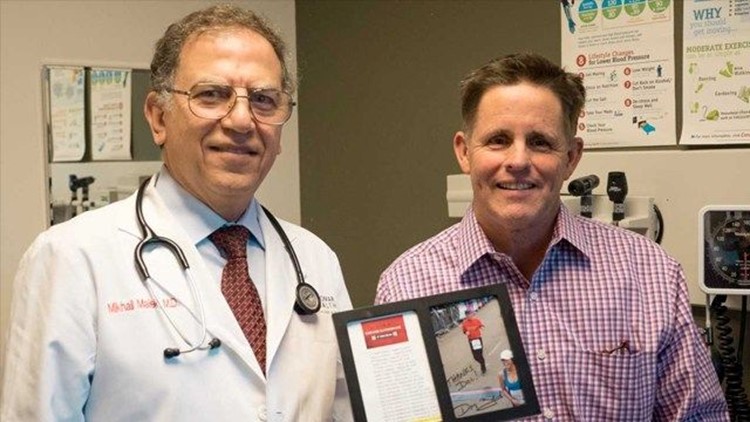 After surviving a heart attack and a cardiac arrest less than two weeks apart, Poway resident and commercial real estate broker Don Zech likes to say “being in shape almost killed me.”

Zech is not the type of person who profiles as high risk for heart problems and certainly not two near death experiences in 10 days. At only 54 years of age, he keeps an active lifestyle playing golf, running and biking; “you name it, I’ve probably tried to play it or do it over a number of years,” Zech said.

He maintains a healthy diet, works out regularly and had a clean bill of health from his most recent check-up. So when he went for a run in August 2016, he never anticipated being rushed to the hospital moments later. A few hundred yards from his home he turned back, telling his wife something wasn’t right. He went to call the doctor when he says the pain in his chest went from a one to a nine. His wife Candy called 9-1-1 and within 15 minutes he was rushed to Palomar Medical Center Escondido.

On the way, the ambulance medics communicated with Dr. Mikhail Malek, an interventional cardiologist with Palomar Health. Upon arrival, Dr. Malek greeted Zech and said he already knew what was going on. He was rushed to the catheter lab where within minutes, two stents were fed through his groin into his heart opening the blocked valve and restoring blood flow throughout his body.

Zech’s main artery had become clogged, perhaps as a result of genetics, cholesterol or a recent fall. The clogging of the heart’s main artery is commonly referred to as the “Widowmaker” because of its high casualty rate. The difference between life and death can literally be minutes; so the national safety standard is to have the stent in place within 90 minutes of arriving at the hospital. Palomar Health’s Heart and Vascular Center averages 58 minutes, earning it national distinction.

Ten days after his heart attack and already back to walking several miles and feeling normal, Candy pulled Zech out of bed in the middle of the night to administer CPR after noticing Zech thrashing around unusually. Another trip to Palomar Medical Center Escondido revealed Zech didn’t have another heart attack (blood flow blockage) but cardiac arrest (irregular heart rhythms).

Dr. Malek says the cardiac arrest happened as a result of Zech’s weakened heart muscles from the heart attack. In a preventive measure, Palomar Health implanted a pacemaker and defibrillator in Zech’s chest to monitor and control his heart rhythm.

Now a year and a half later, Zech is back to his normal routine, playing golf, biking and running. He’s run multiple half-marathons at speeds comparable to his pre-heart attack times and was recently cleared by Dr. Malek to run a full marathon, with reservations from Candy.

“We’ve been married 30 years, he’s my everything,” Candy said trying to contain her emotions while discussing her hesitation about Zech running a full marathon and stressing his heart again.

It’s this full and active lifestyle that brings meaning to Zech’s statement that being in shape almost killed him; he pushes his body to the limit. It’s also why he trusts his heart and life to the Palomar Health Heart and Vascular Center medical team.

Learn more about the Heart and Vascular Center. Watch Don Zech’s story in his own words