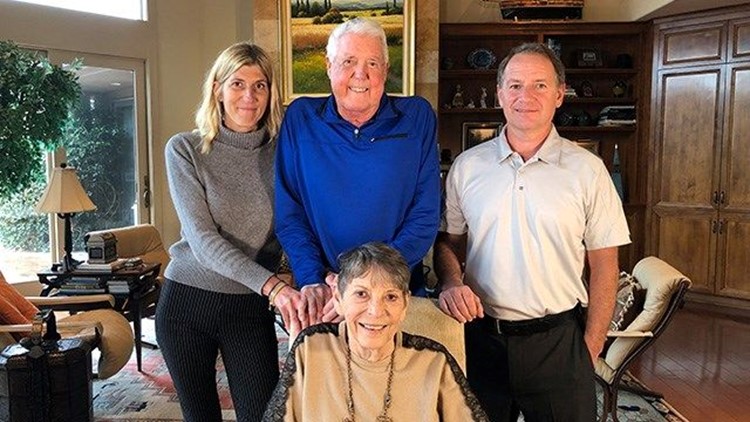 Pauma Valley family has a passion for giving

Pauma Valley family has a passion for giving

[The Belcher family had no way of knowing they would be on the receiving end of their gifts in such a personal way.]

Upon retiring at age 65 as Chairman and CEO of a large public company, Don Belcher turned his passion for business into a passion for giving. He and his wife Marie funded the building of a clinic and clean drinking water in Africa. They established an endowment to support world humanitarian aid. Don joined the National Council of the Boy Scouts, where he and Marie funded an endowment to provide scholarships to Eagle Scouts. And he became passionately involved in his local health care district, Palomar Health.

RELATED: Watch a video of the Belcher family

Don and Marie first connected with Palomar Health when they were invited to take a tour of the newly built Palomar Medical Center Escondido.

“We were so impressed with what we saw,” Don said. “The physical plant was fantastic, the technology was great, but the most impressive thing was the doctors, nurses and staff.

We came away from that tour feeling like this was an institution we wanted to support.”

It wasn’t until a few months after their first major gift to the Palomar Health Foundation that Don found himself a patient in the hospital.

“If you can have a fabulous experience in a hospital, I had it,” Don said of his month-long stay about four years ago.

Don speaks highly of Palomar Medical Center’s large private rooms, and said the 30 plus nurses he met were all “fantastic” and the doctors were all highly competent. He said the focus on patient care flows all the way through the organization, even to the people who clean your room. During his time in the hospital, he formed a special bond with Cardiologist Dr. George Moir.

“He would come by my room every day, take my hand and ask how I was doing…I didn’t even have heart problems. That was pretty impressive,” Don said.

Don says he came away from his patient experience even more impressed with the hospital than he had been as a visitor. That led Don and Marie to create a process of continued giving to the Palomar Health Foundation, following their pattern of gifting to causes they are passionate about.

Don and Marie have returned to the hospital as patients and visitors multiple times since, but nothing compares to what they experienced when their daughter Kristin, visiting their home in Pauma Valley from Temecula, fell off a ladder and became unresponsive.

“That was a very scary situation,” Marie said.

Marie says she demanded Palomar because “we knew she would get the very best treatment.”

Kristin was treated in Palomar Medical Center’s Trauma Room, one of only six in San Diego County. She suffered a shattered wrist, ruptured spleen and head injuries. She was unconscious for four days, spending 10 total days in the hospital. Her husband Laurent stayed by her side through the entire ordeal. Palomar Medical Center Escondido rooms accommodate sleeping arrangements for multiple patient supporters and more importantly, the hospital’s culture encourages loved ones to spend as much time with patients as possible, aiding their recovery.

“It was reassuring to have Laurent and my parents there to support me,” Kristin said.

Kristin’s recovery has been long and sometimes difficult but thanks to her excellent medical care and the love of her parents, husband, and three kids, she is closing in on a 100 percent recovery.

When Don and Marie started their gifting program with Palomar Health four years ago, they were just following their passion to help others in a significant way. They had no idea they would be on the receiving end in such a personal way.

Recently the family decided to make another significant gift to support the cardiovascular team and help with expanding the Palomar Medical Center Emergency Department, which is one of the 10 busiest in California. The expansion, which is scheduled to open in April, continues the Belcher’s passion for giving.