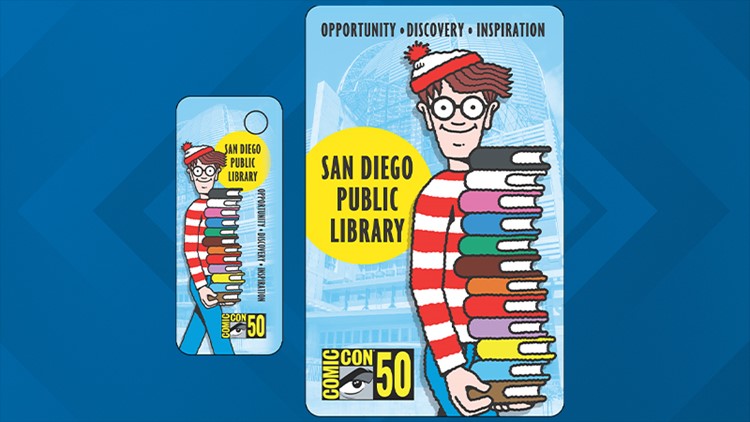 SAN DIEGO — The City of San Diego Public Library is celebrating the 50th anniversary of Comic-Con by offering an exclusive library card to commemorate the convention’s return to San Diego.

The card will be available to visitors at all 36 San Diego Public Library locations as well as at booth #5523 for those attending Comic-Con.

Featured on this year’s edition is Waldo – the iconic bespectacled character at the center of the “Where’s Waldo?” children’s books.

Only 3,000 Comic-Con library cards have been produced and will be available on a first come, first served basis. Cards are limited to one per customer.

In addition to the library card, the Central Library, which is located walking distance from the Convention Center, will be hosting two free spotlight events in honor of Comic-Con’s 50th anniversary.

Book signing and giveaway with Author Raina Telgemeier Tuesday, July 16 at 6 p.m. at the Central Library, Neil Morgan Auditorium. The New York Times bestselling author and illustrator will discuss her upcoming book for young readers, “Guts,” followed by a Q&A and book signing.

Registration is not required, but space is limited.

The Central Library will also be hosting a DJ Lance Rock, Cecil and Friends concert Sunday, July 21 at 2 p.m. in the library’s courtyard.

The party is open to the public and no badge is required, but space is limited.

RELATED: Headed to Comic-Con 2019: Here's what you need to know