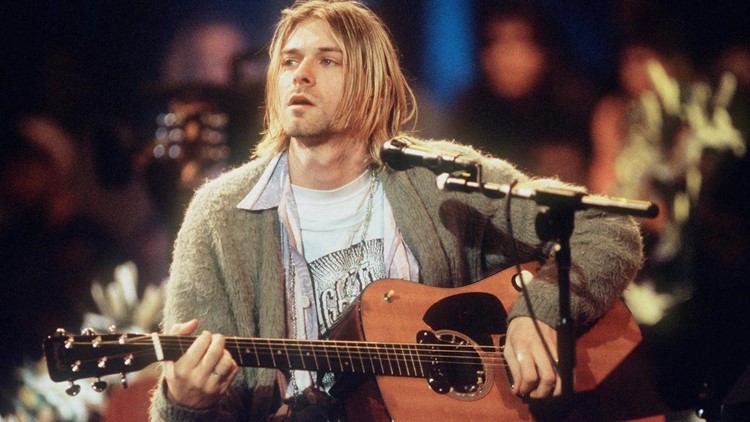 “It’s better to burn out than to fade away.”

That was the Neil Young quote that Kurt Cobain included in his lengthy suicide note in April 1994.

Cobain, the singer and founder of Seattle grunge band Nirvana, was found dead in his Washington state home after taking his own life 25 years ago.

The singer who came from a broken home, was a high school dropout that would become the voice of his generation but he took his own life at the height of his career.

Born in February 1967 in Aberdeen, Washington, to Wendy and Donald Cobain, his parents divorced when he was 9 years old. Cobain would later say that his parents' divorce had had a profound impact on his life.

He became reclusive, retreating to his bedroom to write, draw and listen to music. He also learned how to play guitar and drums.

His high school years would inspire many of his songs, as he was bullied, not interested in sports and dealing with his parents becoming involved with new partners, which caused him to feel forgotten as they started new lives. Cobain played in garage bands throughout high school but none really took off.

Just two weeks before graduating, Cobain dropped out of high school. He said he was kicked out of his house and was homeless for a period of time, living under the bridge of the Wishkah River and crashing on friends' couches. He eventually found employment, working in a resort outside Seattle, and found an apartment.

During his free time, Cobain attended concerts in Seattle, where he met fellow punk rock fan Krist Novoselic. Cobain and Novoselic became close friends, and the singer asked the bassist to form a band with him. After much deliberation on his friend’s part, the duo found a drummer and guitarist, and formed Nirvana in 1987.

The band's sound relied heavily on distorted guitars, pounding drums, muddy bass lines and screaming vocals in the choruses, which was a cathartic way for Cobain to vent his frustrations but also a tool to allow his audience to sing with him.

Nirvana quickly became the most buzzed about band in Seattle and caught the attention of local indie label Sub Pop, who signed the band in 1988. In June 1989, Nirvana released their debut album, “Bleach,” to much acclaim but didn’t make an initial splash in the charts. Years after its release, though, it would go platinum.

As Nirvana started touring in support of “Bleach,” members of the band began leaving. Cobain and Novoselic, as the core of the group, opted to become a trio, hiring Scream drummer Dave Grohl to round out the new lineup.

The trio would eventually catch the attention of David Geffen, who bought the band out of their Sub Pop contract and signed them to his major label, Geffen Records. In 1991, the music world changed when the band released their groundbreaking sophomore album, “Nevermind,” including the single “Smells Like Teen Spirit.”

"Smells Like Teen Spirit" topped the Billboard Alternative charts and its video has been hailed as one of the greatest of all time by Rolling Stone, VH1 and MTV.

“Nevermind” put the music of Seattle on the map, and suddenly bands from the city like Pearl Jam, Alice in Chains and Soundgarden were gaining national attention. The record would go on to be hailed by Rolling Stone as one of the greatest albums of all time. It would go diamond in album sales, an unprecedented feat for rock artists, meaning over 2 million copies were sold.

The spotlight was largely on Cobain thanks to his soft but outspoken demeanor. Cobain would fight for women’s rights, and against racism and corporate greed – famously appearing on a 1992 cover of Rolling Stone wearing a DIY shirt that read “Corporate Magazines Still Suck.”

Cobain would also gain attention from critics and admiration from fans for his candid lyrics and songs. Songs like “I Hate Myself and Want to Die,” “Silver,” “Dumb,” “Negative Creep,” and “Something in the Way” showcased his struggles with addiction and mental illness as well as told his story of isolation.

As Cobain’s fame grew, he became a heavy drug user, turning to heroin in particular to soothe his pain.

He found love with Hole singer Courtney Love, whom he later married. They had one daughter together, Francis Bean.

The couple became the talk of the tabloids due to their drug use and behavior. Whenever they appeared together, paparazzi would follow them and the press coined them grunge’s king and queen.

In 1993, the band released the followup to “Nevermind,” the critically acclaimed “In Utero,” which did not do the album sales of its predecessor  but was still a commercial success.

In November 1993, Nirvana taped what would be their final television concert together, playing MTV’s coveted and well-respected series, “Unplugged.” The concert was hailed by critics as one of the best television performances of all time.

But their relentless touring and recording schedule took its toll on Cobain. In July 1993, Cobain overdosed on heroin in New York City. Months later, in March 1994, Cobain would overdose again in Rome after mixing champagne and the powerful sedative Rohyphnol.

When he and Love returned to Seattle days after his overdose, his wife told police that her husband was suicidal. Authorities later confiscated his guns and medication.

On April 8, 1994, Cobain’s body was discovered by an electrician who had an appointment to install a security system in the singer’s home. He was found dead of a self-inflicted gunshot wound. Cobain left a note behind and toxicology reports said that he had high levels of heroin and traces of the anti-anxiety medication diazepam in his body.

A public vigil was held for Cobain outside the Seattle Center, where 70,000 mourners came to pay their respects to the singer. A eulogy recorded by his widow played continuously over loud speakers outside the venue.

His body was cremated and spread in the Wishkah River, under which he had once lived.

Like many celebrities, Cobain’s image grew larger than life after his death. In 2006, he took the spot of Elvis Presley as the top-earning deceased celebrity; Presley would later retake the achievement.

In Cobain's hometown of Aberdeen, the city’s welcome sign reads, “Come as You Are,” a tribute to one of their most famous resident's songs.

In 2014, Nirvana were inducted in the Rock & Roll Hall of Fame by former R.E.M. singer and close friend of Cobain's Michael Stipe. Cobain's widow, his daughter, and his mother accepted his award on his behalf.

Sex, Drugs and Punk Rock: The Story of Sid and Nancy

Kurt Cobain's Daughter is Not a Fan of Nirvana

Who Was Basquiat? 30 Years After Artist's Death, He Is More Popular Than Ever