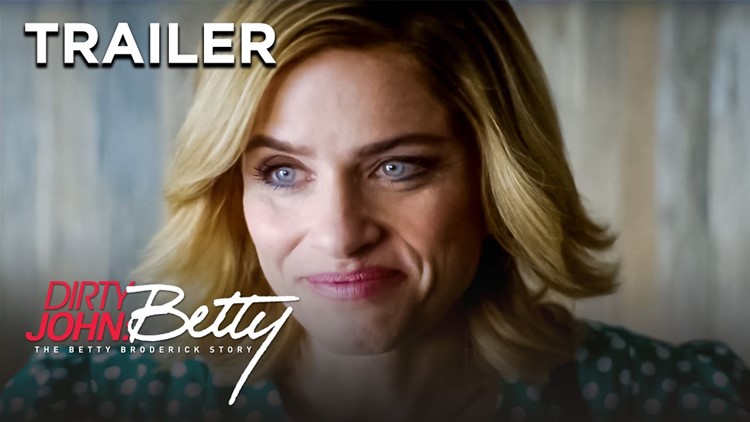 SAN DIEGO — The story of San Diego socialite turned double-murderer Betty Broderick will soon reach audiences across the country who may not be familiar with one of our most well-known local crime cases. The USA Network drama “Dirty John” is returning with a second season subtitled “The Betty Broderick Story” starring Amanda Peet in the title role. Season one of “Dirty John” featured another story of love gone wrong garnering rave reviews – and high ratings.

Many in San Diego were riveted by the proceedings as 44-year-old Betty Broderick was found guilty of second-degree murder in 1991 for the shooting deaths of her ex-husband Dan Broderick (played by Christian Slater in ‘Dirty John’) and his second wife Linda (played by Rachel Keller). It was the second high-profile trial for Betty who's first a year before had been declared a mistrial. Betty was sentenced to 32 years to life in prison.

Betty quickly became the main suspect when Dan and Linda Broderick were found dead in the bedroom of their Marston Hills Home on Nov. 5, 1989. It turned out she had purchased a revolver earlier that year, just a month after Dan and Linda were married, and used a key stolen from her daughter to gain access to the house in the early morning hours. Linda, 28 years old, was shot twice and died instantly, and Dan, 44 years old, was shot once in the chest and reportedly uttered his final words to Betty: “OK, you shot me. I’m dead.” Betty was arrested later that day.

As shocking as the murders were, the trials brought even more attention to the story as Betty took the stand in both portraying herself as an abused, manipulated wife who had suffered in her marriage to Dan Broderick. She also maintained that she had never planned to kill the couple – a claim refuted by the prosecution. Evidence that pointed to Betty Broderick’s cold and calculated moves was the fact she removed a phone from Dan’s bedroom making it so that he could not call for help after being shot.

Prosecutors painted a different picture of Betty – a woman scorned who had tormented Linda and Dan for years. Friends of the Brodericks and even two of their four children also testified about Betty's erratic behavior and obsession with money and possessions.

Over 30 years since the murders, “Dirty John: The Betty Broderick” looks to combine all the dramatic elements of this story: infidelity, wealth and stature, and courtroom testimony from the murderer herself.

The trailer for the new season features actress Amanda Peet as Betty delivering charged lines like “I would have been treated better if I’d been a dog and served my master” while a well-groomed Christian Slater is shown smiling in their picture-perfect 1980s suburban home. The glimpse of the new show juxtaposes Betty’s narrative - being cast aside for a younger woman and losing her children in a messy divorce - with scenes of her perpetrating vandalism and violence. It ends eerily with a close-up of Peet donning the socialite turned murderess's recognizable blonde feathered hair saying, “Call me Betty” from the stand while on trial for murder.

As the tag line boasts, there truly are “two sides to every murder.”

A premiere date for the new season of "Dirty John" has not been released, but the trailer does say "coming soon" so keep an eye out for your next binge obsession about this twisted true crime case.

Additional videos from the News 8 archives on the Betty Broderick case can be found below.