Muralist and surfer Skye Walker painted an ode to his home and favorite surf town. 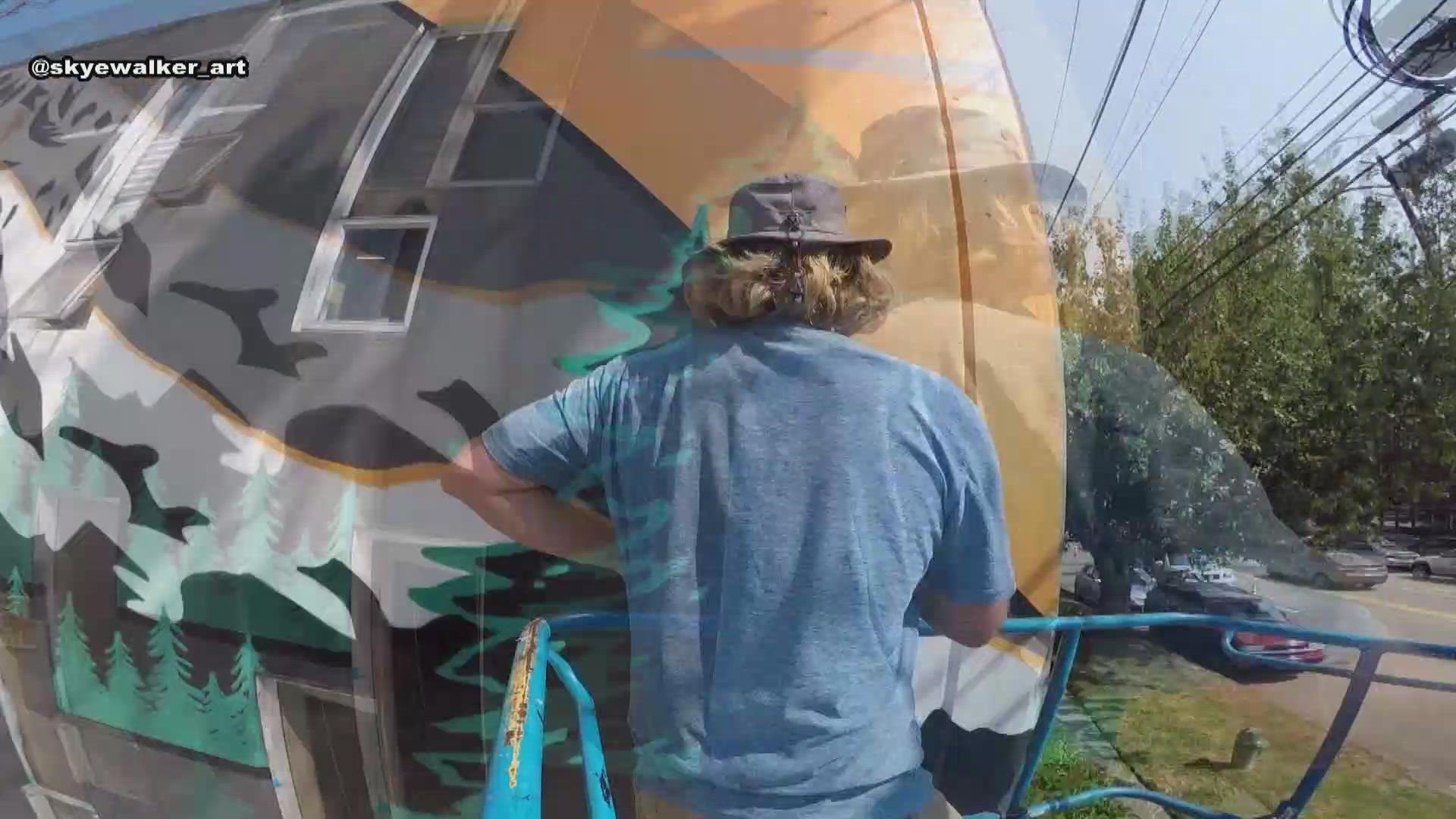 ENCINITAS, Calif. — Skye Walker’s story in some ways reads common. In 2008, Walker bared the news that many Americans received: he said he lost his job during the recession. The economic setback would kickstart the beginning of a new career, but a revival for an old passion.

For starters, Walker knew for years that he wanted to call Encinitas “home.”

“After I graduated college in Oregon in 2001, I’m like ‘I’m moving there and I’m going to surf and live my surf town dream’ and that’s what I’ve been doing,” said Walker outside of a coffee shop in Encinitas.

He also needed a new gig. Walker said Whole Foods reached out to him about painting a mural for a store. That jumpstarted a career as a muralist.

”The beauty about mural work is it puts art in a public forum in a different way,” said Walker.

Walker said the passion for art runs in the family and mentioned childhood stories about his dad.

“He did murals and sign-painting when I was a kid and it was kind of sporadic,” said Walker. “It wasn’t all the time but when I got to high school, he did a few projects I helped him with. Through that, I learned how. After that, I just took it upon myself to do it.”

And so began a comeback career of painting murals across San Diego County and really, from sea to shining sea. Walker even painted a massive mural of surfer Rob Machado in Cardiff in 2018, and then embarked on a mural tour across the country a few years back. He always found his way home to surfy Encinitas.

”It’s a very spiritual place along the coast,” said Walker. “If you’ve ever been here, you kind of feel those vibrations and that mixed with the ocean and the landscape, the environment - it’s hard to put into words unless you’ve been here and live here just how it makes you feel, and I always felt connected to Encinitas since I was a kid.”

So when a local bakery reached out to Walker after seeing his work on Instagram in summer 2021, Walker seized the opportunity to capture the essence of Encinitas with a paintbrush. The colorful mural is finished, ready for people to admire when they walk through the door at Darshan Bakery on Second Street.

"It’s definitely an ode to Encinitas, a visual love letter of my appreciation for this town,” said Walker. “My work revolves around nature and Mother Nature and how we interact with our environment and this mural kind of embodies that.”

"It’s very focused on what I want to paint which is natural elements,” said Walker.  “It’s free-handing my own vision for Mother Nature and pelicans and textures and what not and colors.”

But what Walker really enjoys about Encinitas is the people he’s met along the way, a community he said is home to many Southern Californian creatives.

"Everybody is active and thrives on the environment,” said Walker. “I definitely am inspired by other local artists and muralists and designers.”

So in many ways, Walker’s story is anything but common. One can’t help but stop and study the mural through the window on Second Street, admiring the artwork that captures the heartbeat of that surf town dream.

You can learn more about Walker’s work here.