News 8 follow up on horses rescued from Valley Fire

News 8 viewers wrote in concerned about the health and well-being of the horses after seeing them in being evacuated from the Valley Fire. 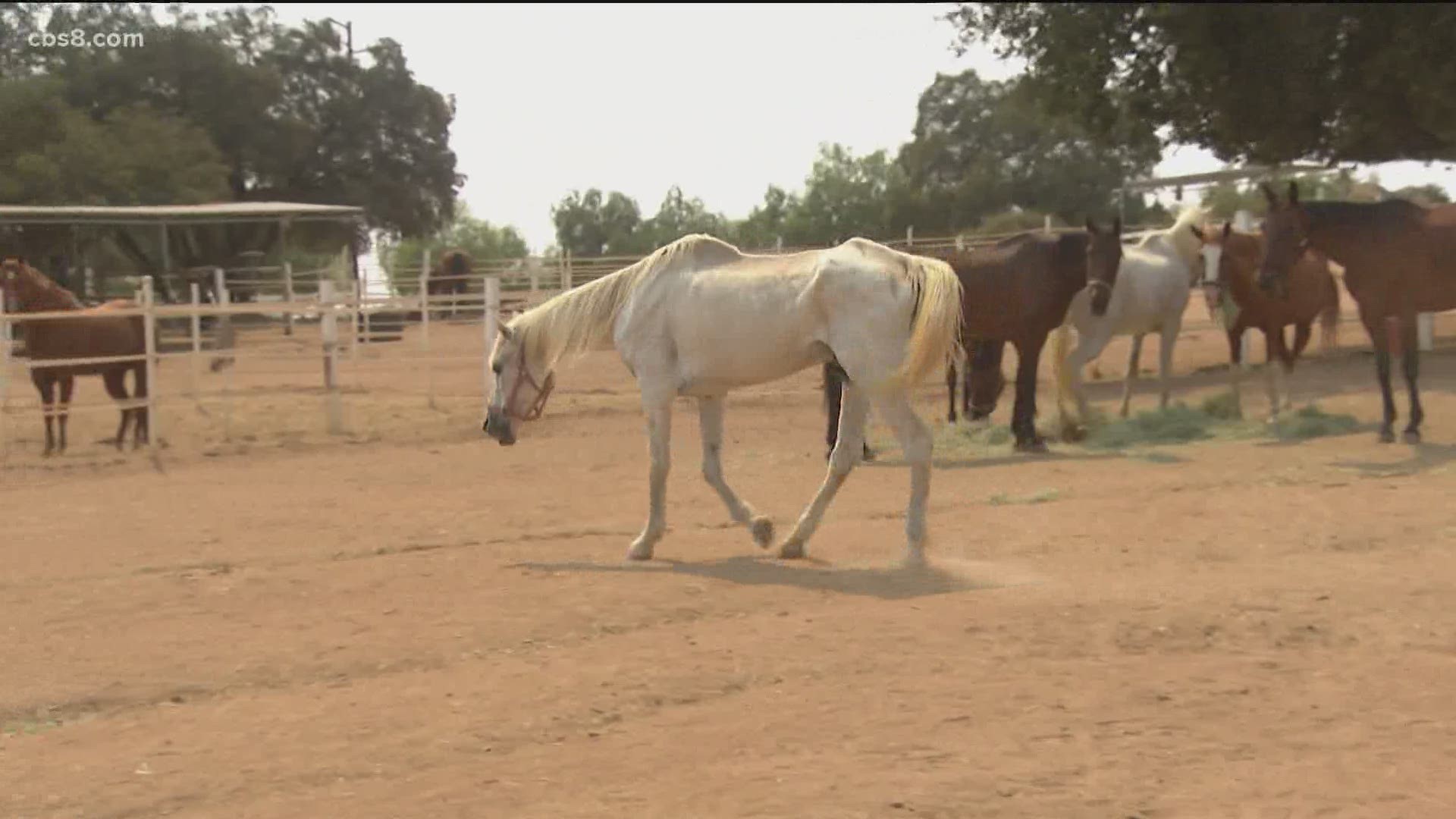 BONITA, Calif. — As the Valley Fire tore through the Alpine and Jamul areas, officers were out rescuing animals, trying to get them to safety.

Dozens of animals were brought to animal services in Bonita since the fire started Saturday including dogs, cats, horses, chickens, and goats, even a parakeet.

Over the weekend, News 8 shared video of two horses in particular being led to safety. Viewers wrote in concerned, saying they looked too thin.

News 8's Shannon Handy tracked them down and found them being cared for at the Windfall Ranch in Alpine.

One of the horse’s owners said both horses are well-loved and taken care of.

When the Valley Fire roared through Alpine Saturday, horse owners everywhere scrambled to get their animals to safety, including Vince Balch.

"We waited until the flames jumped across Carve Acre and decided to not take a chance," he said.

News 8 was there as Vince's horse, Frank, was led to safety. Alongside Frank was Clyde. Both horses live together on Vince's girlfriend’s ranch.

So he's well taken care of?

Vince said Frank, a retired racehorse, has always been thin, especially during the summer.

"He's an Arab mix. You could always see his ribs," he said. "From the time I met Frank, he always looked skinny."

Vince said Frank also has cancer, which has contributed to his weight loss.

But, he claims Frank is not in pain, eats well, and gets regular visits from a veterinarian, including just last week.

As for Clyde, while Vince isn't his owner, like Frank, he said Clyde is older, about 25 years old, and that he too is pampered like just Frank.

“We've rehabbed horses, brought them out there, and take care of them,” Vince said.

Frank and Clyde will stay at Windfall Ranch until it’s safe for them to return home.

Meanwhile, over at San Diego County Animal Services in Bonita, officials are caring for dozens of other animals that had to be rescued including chickens, donkeys, as well as horses.

Together with the San Diego Humane Society, they had taken in more than 200 animals as of Monday evening.

So many, that an additional rescue location opened Monday at the Iron Oak Canyon Ranch, located at 12310 Camp Rd. in Spring Valley.

Officials said all the animals are being well cared for, just as Vince has assured us the same.

“They get the care they need that's for sure.”

News 8 did reach out to the Humane Society.  A spokesperson tells us they are aware of people’s concerns surrounding these two horses and have been in touch with the San Diego County Department of Animal Services. The spokesperson added, “they have jurisdiction in this particular case and would be the investigating agency. San Diego Humane Society's Humane Law Enforcement will assist, upon their request.”

In the most stressful situations, our Emergency Response Team have to be calm with the animals they rescuing in the #ValleyFire. 2 horses & 2 sheep were taken to safety from Mother Grundy Truck Trail in Jamul late last night. Our team is now out for day 3 of rescues. pic.twitter.com/jz32SnJ5h6