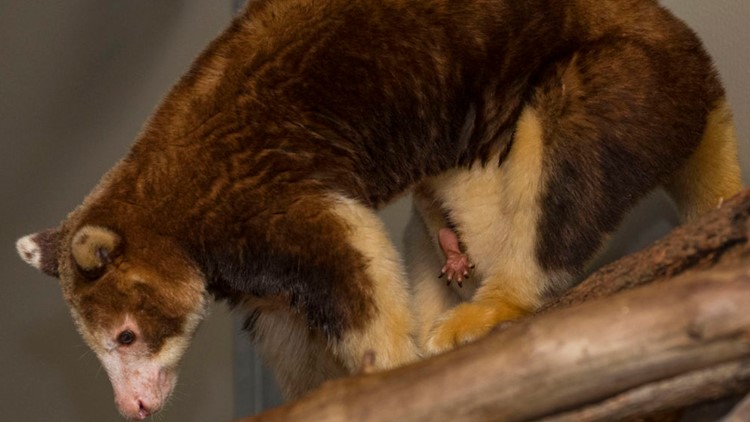 SAN DIEGO — The San Diego Zoo announced Friday that a Matschie's tree kangaroo joey was born at the Safari Park earlier this year.

The joey's mother Polly gave birth in March in the Safari Park's Walkabout Australia habitat. Animal care staff have yet to determine the joey's gender or name it as it is still developing inside Polly's pouch. The joey is the first Matschie's tree kangaroo born at the Safari Park, according to the zoo.

The species first arrived at the Safari Park last year as part of a program to save threatened species from extinction. The International Union for Conservation of Nature's Red List of Threatened Species lists the Matschie's tree kangaroo as endangered and fewer than 2,500 remain in the wild due to hunting and habitat loss in its native Papua New Guinea.

The joey was about the size of a jelly bean at birth and has more than doubled in size since then, according to the zoo. In total, the joey will stay in its mother's pouch for as long as 10 months as it continues to nurse and develop. Even after being weaned at one year old, it will remain close to Polly for nearly two more years.

"Polly is an excellent mother, consistently grooming her little one," Barney said "We are really looking forward to the joey fully emerging soon."

Safari Park visitors can spot Polly and her joey at the Walkabout Australia exhibit. Access to the exhibit is included with admission to the park.