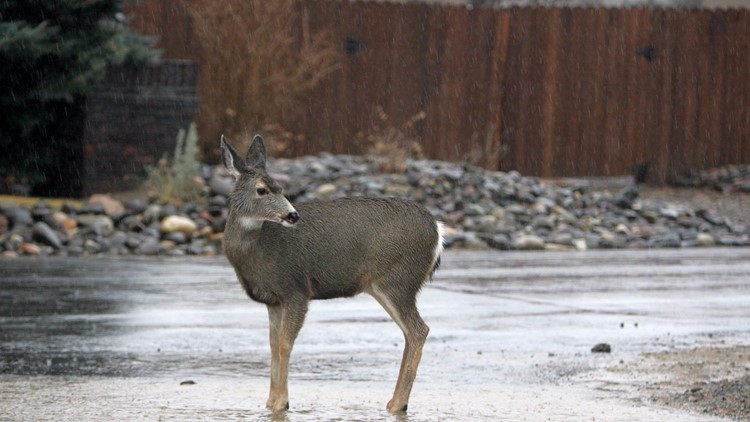 NEVADA, USA — Zombie deer may sound like something in a bad B-movie, but wildlife regulators say they're real and officials are working to keep them out of Nevada.

The term relates to animals that have contracted chronic wasting disease, a highly contagious and terminal disorder that causes symptoms such as lack of fear of humans, lethargy and emaciation, The Las Vegas Sun reported. It can destroy deer and elk populations.

Officials are testing dead animals and monitoring migratory elk and deer at the state line with Utah for signs of the sickness, Peregrine Wolff, a Nevada Department of Wildlife veterinarian, said.

Nevada legislators also passed a law earlier this year to keep parts of certain carcasses out of the state in an attempt to stop the spread of the disease.

States reporting animals with the illness include Kansas, Colorado and Wyoming.

The disease is neither viral nor bacterial. Instead, it is transmitted by prions — protein particles that have been linked to brain diseases including mad cow disease in cattle and Creutzfeldt-Jakob disease in humans.

The Centers for Disease Control and Prevention has raised concern that chronic wasting disease may pose a risk to humans.

The minimum time between exposure and the first symptoms is thought to be 16 months, according to a study posted to the Center for Food Security and Public Health. The average incubation period is two to four years. Some studies show that animals are contagious before symptoms start.

Wolff said finding just one is rare because the disease is so contagious and it remains in the environment for years.

A 2004 study in the Centers for Disease Control's Emerging Infectious Diseases journal showed two captive mule deer populations were infected with the disease in separate paddocks that hadn't had infected animals in them about two years.

Nevada lawmakers this year banned bringing certain animal body parts into the state, including the brain and the spinal cord that can contain large concentrations of prions.

In testimony about the proposed law, Tyler Turnipseed, chief Nevada game warden, posed a scenario where local populations are infected by exposure to butchered waste dumped by a hunter passing through Nevada from another state.

J.J. Goicoechea, a state Department of Agriculture veterinarian, told lawmakers that officials fear the spread of the disease into Nebraska, Utah, Idaho and Nevada.