Stumbling into an orb weaver web will make you do what County supervising vector ecologist Chris Conlan calls “the crazy spider dance.” 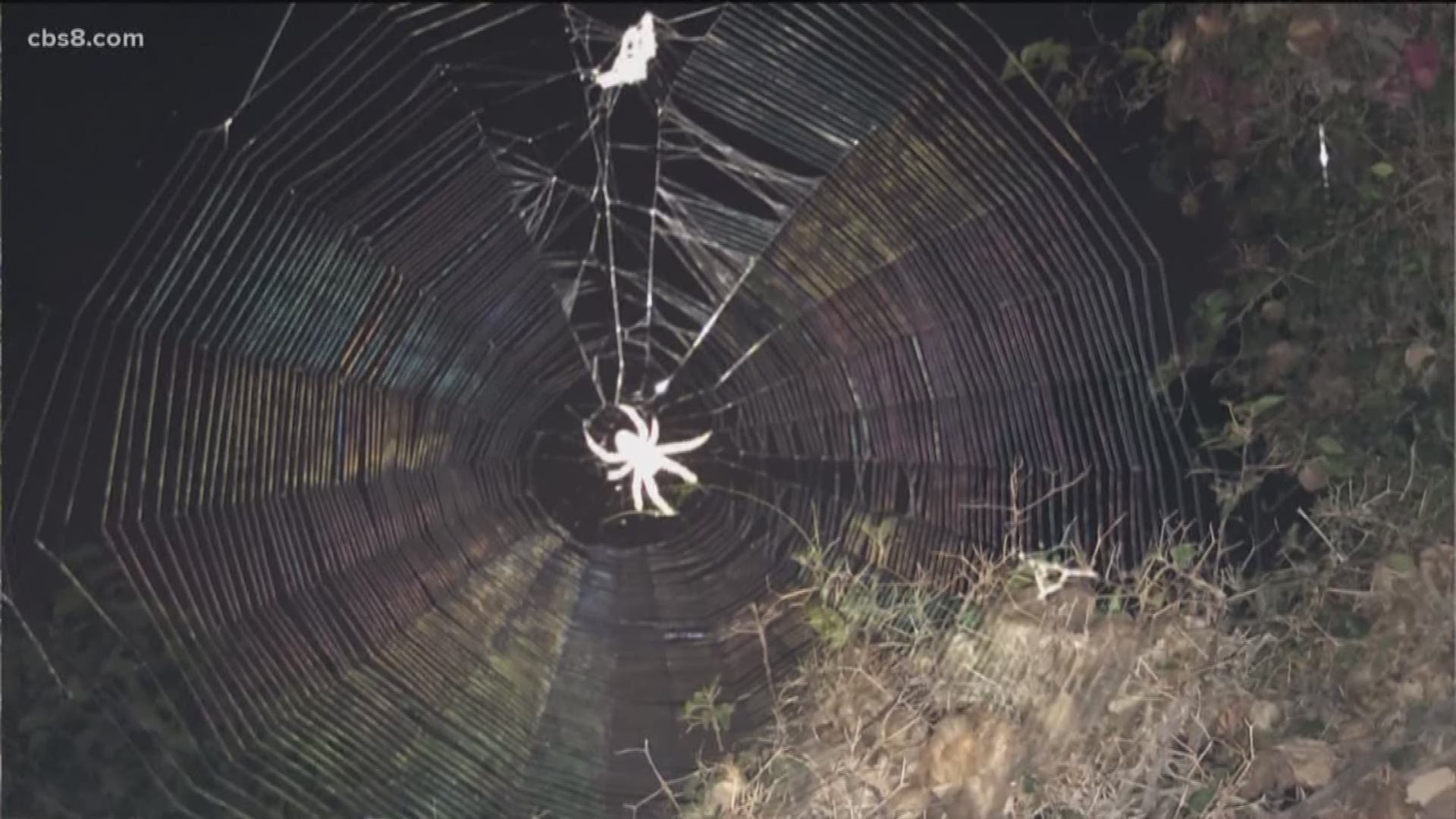 SAN DIEGO — They’re big. They’re scary looking. And they spin enormous, circular webs that can stretch between trees, from a tree to your house, or your house to your car.

Stumbling into an orb weaver web is an unmistakably creepy feeling. You could be hiking around the neighborhood, working in the yard, or walking out to the car.

Suddenly, you’re smacked right in the face, your hair, your arm or other exposed bit of skin by a large, sticky strand of web! Your spider-senses scream. You flail, stumble, try to peel the web away, and as passersby stare you’re doing what County supervising vector ecologist Chris Conlan calls “the crazy spider dance.”

Conlan, who has loved insects, spiders and critters since he was a kid, has been the County’s most visible “bug guy” for years as part of the County’s Vector Control Program.

Conlan said this week that county residents could see more orb weavers this year than they have in years. He said that’s because spiders—including orb weavers— have more little bugs to eat this year because we had a lot of rain, which created more vegetation and insects overall.

“So, you’re probably going to be running into a lot of spider webs very soon, if you haven’t already,” Conlan said.

“A well-fed female can be a pretty imposing spider,” Conlan said. “But they’re generally nothing to be worried about. In all honesty, if you run into their web, their general reaction is to bail off quick. They don’t like to hang around once something that’s big enough to smash through their web hits it. They know it’s not anything they want to tackle and wrap up to eat.”

Credit: ASSOCIATED PRESS
A female orb weaver spider works to encase a dragon fly in its web, Tuesday, May 31, 2005, in Sopchoppy, Fla. The dragon fly flew into the spider's web and was not able to free itself before the orbweaver arrived to prepare it for dinner. (AP Photo/Phil Coale)

Orb weaver’s webs are one of their most fascinating features. In fact, orb weaver spiders are not a singular species. They’re a family of spiders, classified by their web spinning, that come in various sizes and colors.

Conlan said many spiders spin small, undistinctive strands of webs tucked into corners to catch prey. But orb weaver spiders spin large, circular, often beautiful webs, the classic kind Conlan said that we often see depicted in “kid’s books and children’s stories.” Orb weaver spider webs are often so big they seem to defy logic. They can literally stretch from one tree to another, or between large objects like houses and cars.

“It’s pretty amazing,” Conlan said. “They have a few ways of doing that. They can just walk down one tree and to another. Typically, they’ll spin a single strand of silk and a gust of wind will blow it to another branch or object. It will stick and the spider can now walk back and forth on that strand that’s now attached to the far-away object.”

Beauty aside, not many people are thrilled to run into an orb weaver spider web. The general reaction is revulsion, even for bug lovers like Conlan.

So what can people do to dodge the orb weaver webs?

Conlan said this is the time of the year he risks looking “like a weirdo” around his house by walking everywhere with his hand out in front of him.

And it’s better than doing the crazy spider dance.

For more information about the County’s Vector Control Program, spiders and other vectors and critters, go to the County’s Department of Environmental Health’s website.