San Diego Humane Society investigating after 2 dogs were left outside with no shade, food or water

Dennis Connor was checking on a building he owns off 32nd Street when he spotted the two dogs chained up in a filthy backyard seemingly left to die. 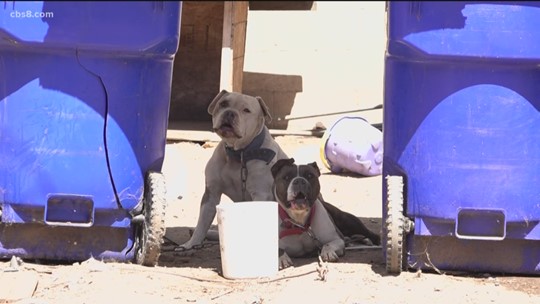 SAN DIEGO — A man jumped into action Sunday saving two dogs that were left outside with no food and water. The disturbing discovery was made near the Mount Hope neighborhood and prompted an investigation by the San Diego Humane Society.

Video of the two animals is hard to watch but it's something no animal-lover ever could ignore.  Dennis Connor was checking on a building he owns off 32nd Street when he spotted the two dogs chained up in a filthy backyard.

"They were spinning around. [They had] no water. They were in the hot sun [with] no food and they were just stuck there, and it was horrible,” said humane society officer Austin Smeuferer. “They were basically left to die.”

Earlier in the week Connor says he saw the family that lived at the home packing up and leaving. It appeared to him that they were moving for good. But the dogs were left behind.

Not knowing if the owners were coming back, for two days Connor watched over the dogs giving them food, water and even used trash bins to build a makeshift shelter to protect them from the blazing sun.

But after a little care and attention, the pit bulls perked up.

"It felt so good to be there and their bellies were full of food and water and they fell asleep,” said Connor.

After learning the property was being sold and the tenants had in fact moved out. Connor contacted the humane society and Sunday afternoon they came to take the dogs.

"During the investigation, [we] observed the dogs entangled [with] no access to water, to shelter,” said t Smeuferer. “There were temperature readings in area of over 110 degrees.”

Officers were able to peacefully lure the dogs out of a bad situation and into a more hopeful one. Connor says he now hopes this story inspires others to speak up for those who can't speak for themselves.

"Don't abandon pets,” he said. “Give an opportunity for someone else to love them and for them to love back.”

Now that the humane society is involved, they said they will be contacting the previous renters to find out what led to the dogs being left behind. It is a possibility cruelty charges could be filed in the case but officers said it was too early to determine that.

As for the dogs, they'll stay at the shelter for treatment until they can find new owners.