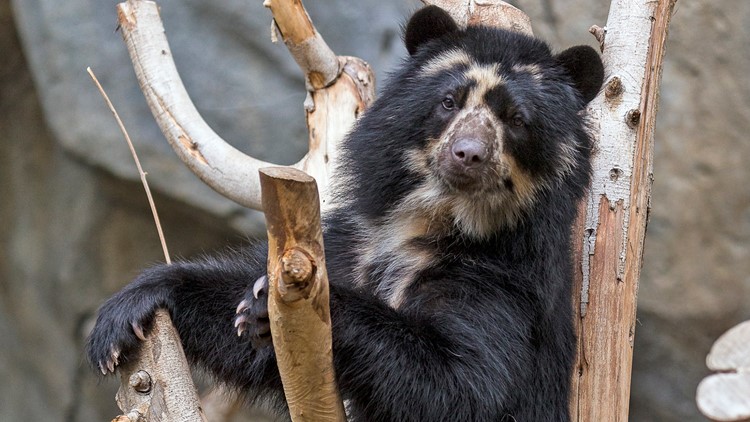 "We are overjoyed about the birth of Alba's first cub," said Chris Hamlin, the zoo's animal care manager. "Alba is showing all the appropriate behaviors of a good mother, being very attentive to her newborn. We are so impressed with how well she is handling motherhood."

The mortality rate for Andean bear cubs in captivity is high, according to zoo staffers, who said they are keeping a close watch via a closed- circuit video camera and are cautiously optimistic for the cub's long-term survival.

Andean bears, also known as spectacled bears for the patch of white or light brown fur around their eyes, make their home in the Andean jungles of South America. The species is considered vulnerable, primarily due to habitat loss.

The cub will give animal researchers insight into the maternal habits of the species, as well as cub development, said Russ Van Horn, a population sustainability scientist with San Diego Zoo Global and co-chair of the International Union for Conservation of Nature's Andean Bear Expert Team.

"The Andean forests where we work are so rugged and dense that it will be a long time before we can study the maternal behavior of wild bears there," he said. "Alba's behavior and her cub's development will suggest how closely, and for how long, wild mothers and cubs may be linked to birth dens, where we think they're sensitive to disturbance by humans."

San Diego Zoo Global has worked with partners in Peru to conserve and study the only bear species native to South America since 2008. Andean bears live in dense forests but also occasionally in grasslands and scrublands. Around 3% of their habitat is destroyed each year for mining operations, farming and timber harvests, and construction of new roads fragments the existing habitat.

According to the zoo, Andean bears are considered an "umbrella species," meaning that conservation efforts protecting the bear will be a net benefit for other flora and fauna in the Andes Mountains. Estimates on their numbers in the wild range from 2,500 to 10,000.

The San Diego Zoo has had Andean bears since 1938, with the cub being the ninth overall and first since 1993.

Zoo visitors will likely not see the newborn cub for several months as Alba cares for and bond with the baby in her den.