Why are sharks staying around the California coast longer?

Shark experts are giving many reasons why we are seeing more this year including less people in the water during the pandemic and the unseasonably warmer weather. 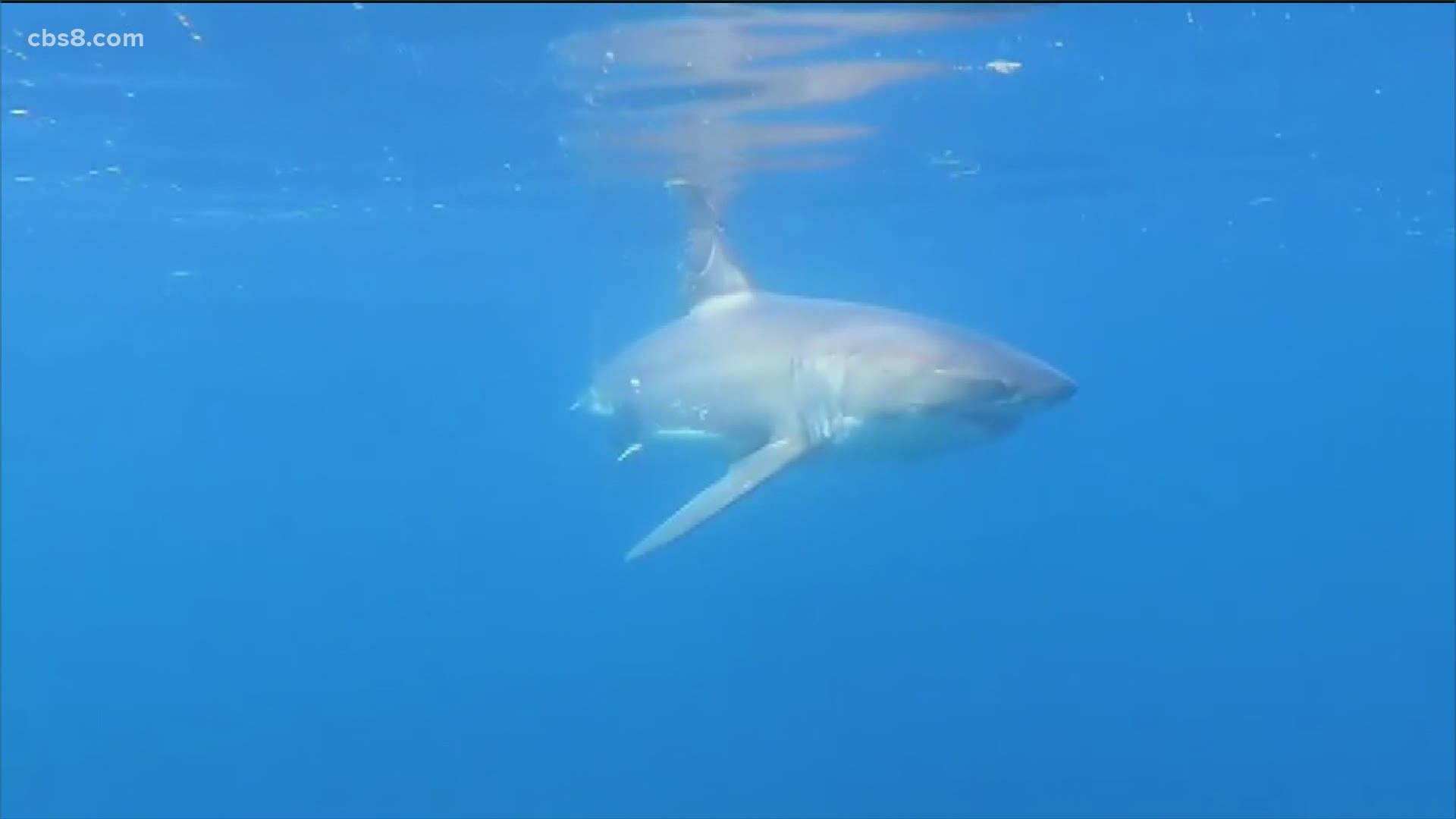 "Oh my gosh, it was an amazing experience to finally see one up close," said Henderson, who served as first mate on the six-passenger boat Sunday.

Henderson stuck his GoPro camera in the water and calmly watched the shark glide by.

“Everyone was very excited. One person was a little nervous, but it's very understandable if you watch a lot of movies,” he said.

The great white stayed around for about 10 minutes, delaying the group’s trip from Mission Bay to Catalina Island, but no one minded.

“It was a welcomed surprise. It was under a kelp patty with a ton of fish and just hanging out in the shade pretty much," Henderson said.

There have been more and more shark sightings lately like a group of leopard sharks spotted Monday at La Jolla Cove near the Marine Room Restaurant, swimming right under paddleboarders and snorkelers out in the water.

So why all the sharks all of a sudden?

"The reason why we think they like our beaches is because the water is warmer and closer to the shoreline and there's an abundant food source,” said Dr. Chris Lowe of the Cal State Long Beach Shark Lab.

Dr. Lowe said not only do San Diego beaches have a lot of stingrays, which can be a shark's favorite food, but the ocean water is also still much warmer.

"The mid- to high-60s are unusually warm for this time of year. It's an unusual year. We've seen more sharks than we normally see,” Lowe said.

Plus Southern California beaches are “hot spots” for juvenile white sharks between four-and-a-half and nine-feet long that will hang out just outside the wave break.

"We've had sharks that have been at particular aggregation sites and now into the fall, which is something we haven't seen,” Lowe said.

Dr. Lowe said in the last few years more sharks have gathered in Huntington Beach, Dana Point and San Onofre, but this year, it's been San Diego and Santa Barbara.

“We know that climate change is starting to influence the behavior and distribution of the sharks,” Lowe said.

Lowe said the shark sightings could be the harbinger for climate change. The shark lab has tagged over 120 sharks over the years. Last year, the team tagged 12 or 14 sharks, and this year, it's tagged 38, the most they’ve ever tagged in a single year.

“This year is our big year, and we aren’t done with the year yet, so there’s still a lot of sharks that we see out there that don’t have tags on them. Our goal is to tag as many as we can so we can track their behavior,” Lowe said.

Shark lab divers go out on boats with drones and dart a tag into their back or surgically implant an acoustic transmitter on a shark that lasts 10 years. From Morro Bay to the Mexican border, the shark lab has 100 receivers listening to tagged sharks. They can send real-time alerts to lifeguards when sharks pass by certain buoys.

Dr. Lowe said we should expect to see more sharks as long as it stays warm.