Man with Alzheimer's proposes to wife after forgetting they were married; vow renewal was 'magical'

Lisa and Peter Marshall met as neighbors in Harrisburg. They are now battling Peter's early-onset Alzheimer's Disease together. 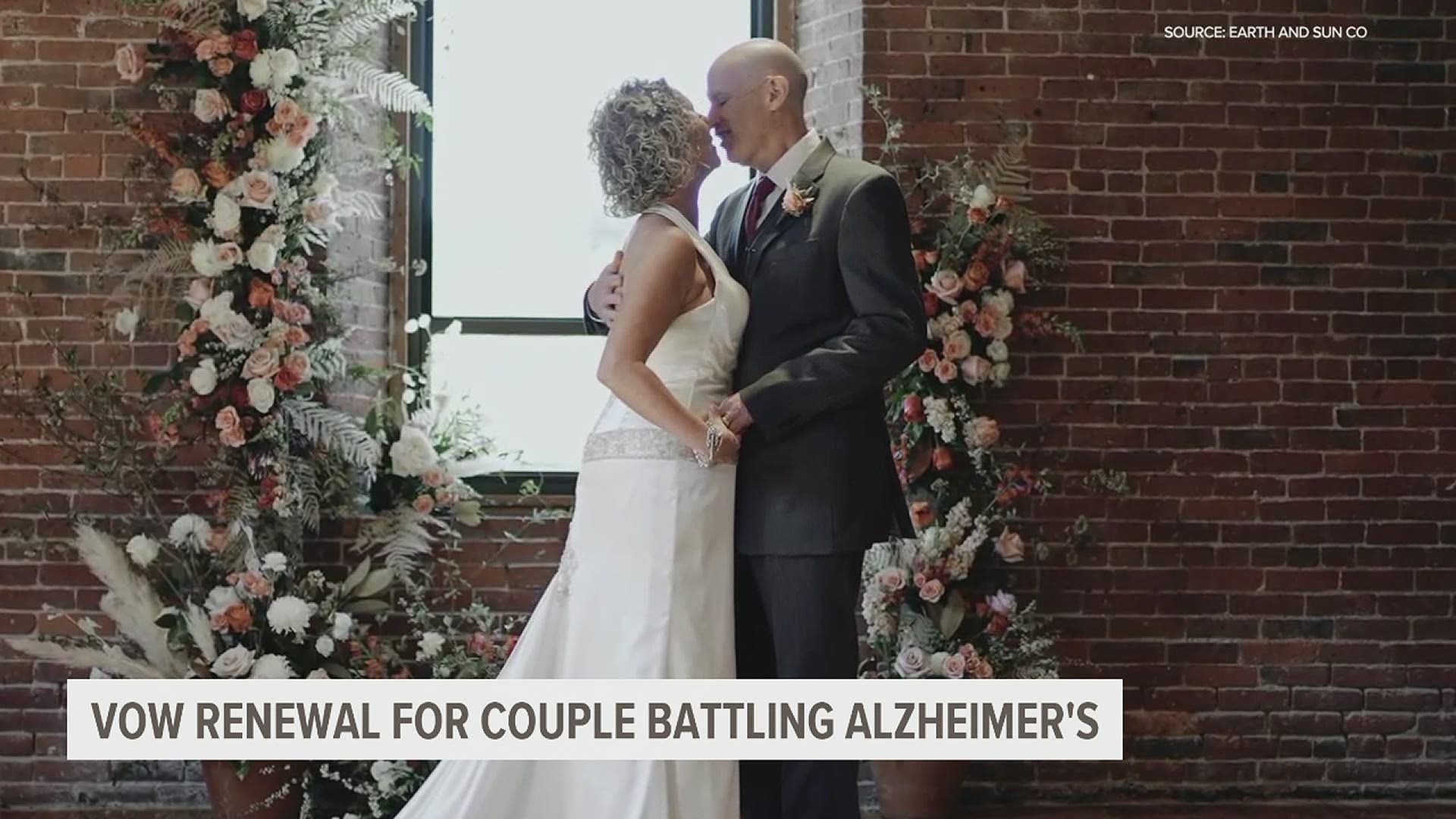 ANDOVER, Conn. — The proposal came while watching a wedding scene on TV.

But she wasn’t sure he would remember asking.

Peter Marshall, 56, was diagnosed with early-onset Alzheimer’s Disease in the spring of 2018.

His forgetting began about five years earlier, Lisa said, when he had trouble coming up with words.

“He was talking around the word ‘airplane.’ He was saying, ‘You know the thing we get on when we travel, when we go up in the sky.’ He just couldn’t remember that word. He would often describe a word rather than use it,” Lisa said.

DO YOU LIKE ME? We were watching an episode of the TV show New Girl and a certain couple was getting married, and I was crying and letting some of the pain stream down my face. Peter Always calls me out when I’m crying during a show or movie and today was no different. I caught him laughing at me and I laughed, too and blew my nose and told him to shut up. I said, “It’s so beautiful. I’m really happy. Isn’t this nice?” pointing to the TV. Peter leaned in, over the end table putting his chin on his hand and he said, “Let’s do it!” with this huge inviting smile! “Do what?” I asked and he pointed to the TV. “Get married?” I asked and Peter’s grin grew so wide and he said, “yes.” Shaking my head in disbelief and joy I asked him, “Are you asking me to marry you?” He laughed and chirped out loudly, “YES! Its gonna be a lot of work!” and he laughed from his belly. And I said, “Yes, Peter, I’ll marry you.” Much Love, Lisa and Peter

Even after the diagnosis, Lisa said she couldn’t process the severity of the prognosis.

“My awareness of Alzheimer’s was it’s an older person’s disease and I don’t need to know anything about it,” she said. “Until it’s relevant in your life you don’t pay any attention to it.”

I LOVE YOU, SAY IT AGAIN. Please hear these words when your loved one speaks them and slow down and pause in the moment to receive them and relish in them. Wonder about and ponder their meaning from your loved one and please never, never take them for granted for they are the sweetest of all the gifts you will ever receive. And slow down and pause when you say them to your love and say them with meaning as a gift you are presenting and look into the eyes of the person you love to deliver their significance. Touch a cheek or a hand or an arm and accompany your words with a kind gesture to more deeply convey your feeling. And feel it. Anticipate the reaction as the giver or the receiver and allow your heart to swell with joy. I will cherish this video for the rest of my days and play it until it is memorized in my mind so that I may need only to close my eyes to push play. Much Love, Lisa and Peter

She was forced to learn quickly as the pace of the disease progressed.

Peter had to retire in January 2019, less than a year after the diagnosis. Lisa gave up her career as well in January 2020 to become Peter’s full-time caregiver.

Her coping outlet is her blog, “Oh Hello Alzheimer’s.” The page offers an inside look of caregiving and serves as a community forum for thousands of people affected by the disease—friends, family, health care workers and other caregivers.

“It’s a very lonely life because you lose your connection to your soulmate,” Lisa said. “There’s no reminiscing anymore. It’s just caregiving.”

BREATHE IN THIS GORGEOUS DAY!!

The couple met as longtime neighbors in Harrisburg. They later moved to Andover, Conn. and had a beachside wedding in Turks and Caicos in 2009.

So when Peter proposed, Lisa decided to follow through on his idea.

“We had a very short window to do it because Peter was declining so rapidly,” Lisa said.

Her daughter, a professional wedding planner, organized the entire event in six weeks.

“It was a magical day. Peter was very bright and he was sharp and he was focused. He stayed with me cognitively all day long,” Lisa said. “It was beautiful.”

As Peter’s memory continues to fade, Lisa said she will remember that day forever.

Credit: Lisa Marshall and Earth + Sun Co.
Left: Lisa and Peter Marshall at their 2009 wedding. Right: The couple at their 2021 vow renewal ceremony.