A three-year-old boy treated for an aggressive staph infection had both of his legs amputated. San Diego firefighters brought his fire truck fascination to life. 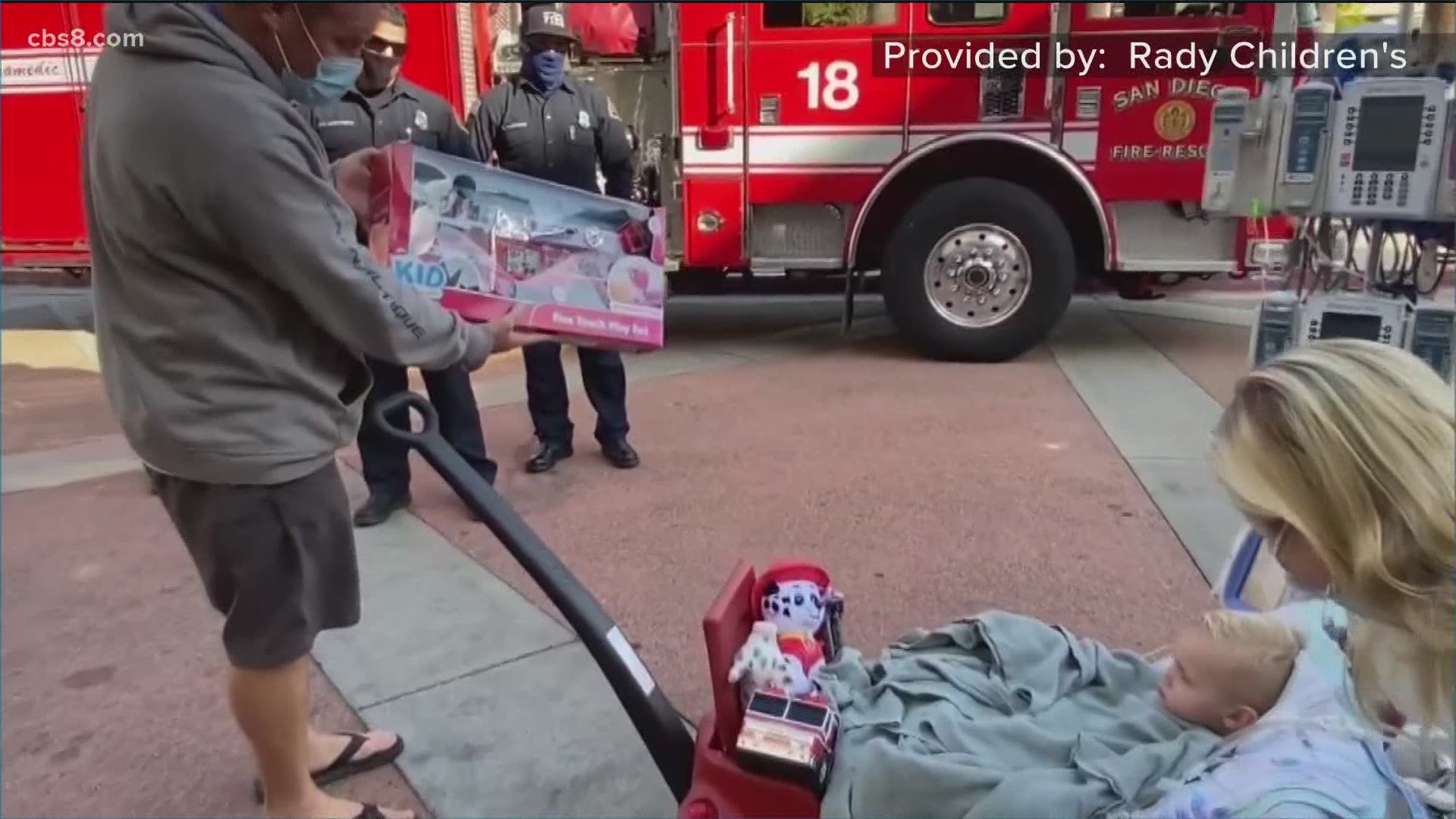 SAN DIEGO — It was a special surprise for a little boy being treated at Rady Children’s Hospital on Monday.

Last week, News 8 reported about Beauden Baumkirchner, 3, who fell off his bike and scraped his knee in October and was rushed to the hospital for an aggressive staph infection. Both of his legs had to be amputated.

On Monday, San Diego Fire-Rescue heard about his fascination with fire trucks and paid him a special visit.

“When we saw Beauden come out for the hospital, we lit up, he lit up and we are happy to meet him,” said Captain Joe Amador, San Diego Fire-Rescue.

Beauden’s mother said his fascination with firefighters has helped keep his spirits up.

“When he was intubated for the first two weeks he was asleep, when he woke up, it was one the first thing he asked for -- fire trucks,” said Julianna Baumkirchner.

Friends and family sent Beauden fire truck toys, but then San Diego Fire-Rescue heard about Beauden’s aggressive staph infection and his love for firefighters, so they pulled up in the fire engine and lined up outside the hospital.

“We know he has a long road ahead, but nothing can make us more proud to try and fulfill a little bit of a wish and give him a little bit of happiness for this day,” said Amador.

Beauden has gone through 17 surgeries in seven weeks where both of his legs were amputated and so were some of his fingers. He and his family were visiting from Arizona when he fell off his bike while staying at the Mission Bay RV Park.

News 8 spoke to one of his doctor’s last week. Rady Children’s Hospital Infectious Disease Medical Director, Dr. John Bradley, said Beauden suffered from an unusual aggressive strain of staph infection and they don’t know how he got it.

“This is a fluke, this a one off. You can't have a parent, every time they fall and scrape their knee, bring them to the emergency department,” said Bradley.

From money raised to special surprises from heroes, each act of kindness is encouraging hope.

“It's incredible when you are in such a dark place and then you receive all this light from people. It really lifts you up,” said Baumkirchner.

A GoFundMe was started to help the family raise more than $100,000 to help with hospital bills, the need for advanced prosthetics and housing as they’ve been told Beauden needs to stay close to Rady’s for the next three months.

RELATED: Scrape on the knee leads to a little Arizona boy’s double amputation