Leptospirosis: Dog disease on the rise in San Diego

The potentially deadly disease is nothing new, but it’s typically found in damper climates, like the Bay Area. 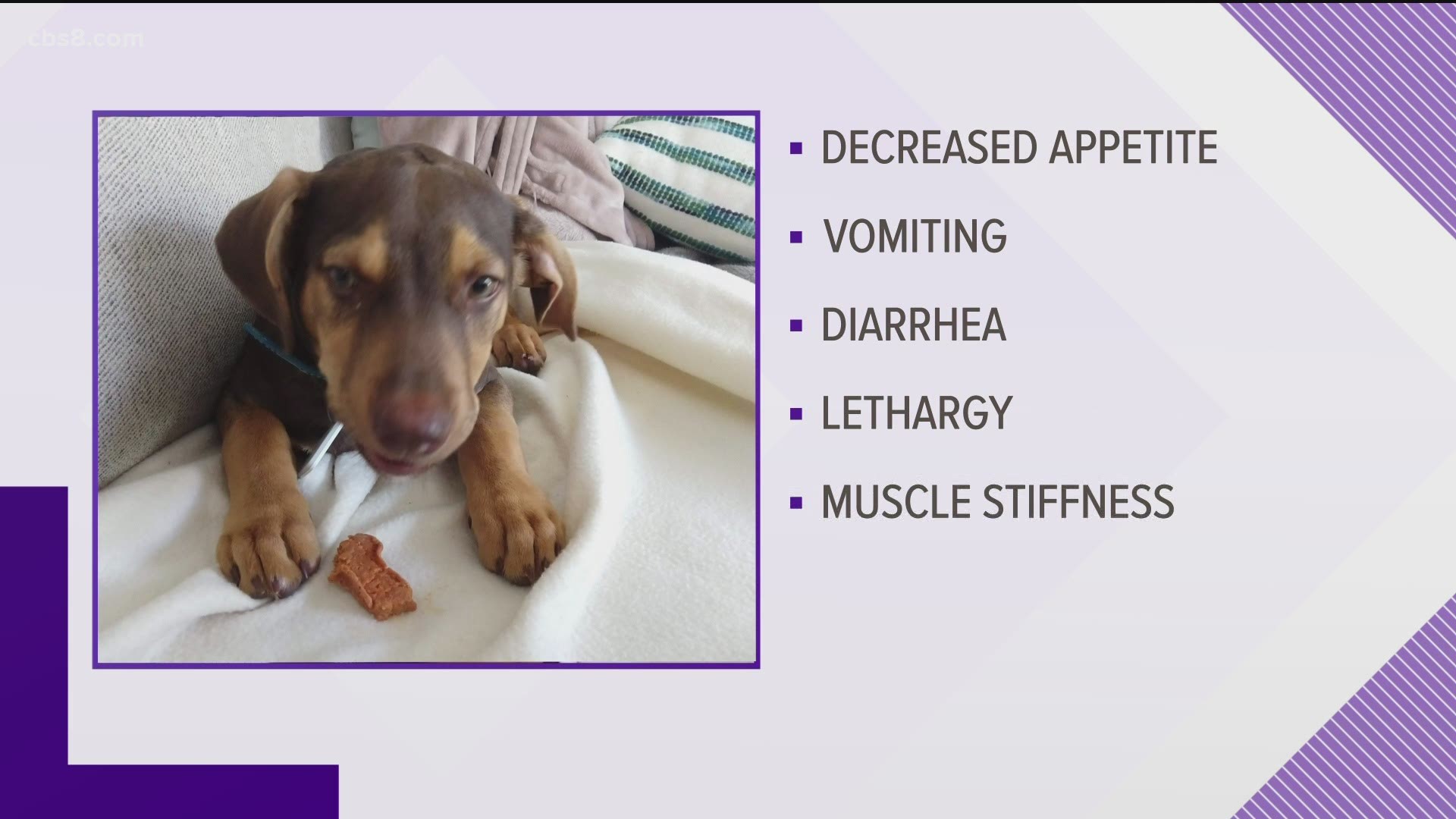 SAN DIEGO — Officials are warning about an uptick in cases of a bacterial infection called leptospirosis in San Diego County.

Countywide, there have been 34 confirmed and probable cases among local dogs mostly in the Hillcrest and Mission Hills areas. At least one dog had to be euthanized.

Leptospirosis is nothing new, but it’s typically found in damper climates, like the Bay Area.

Just one month after Alexi Perez and her husband Leo adopted their dog Bogie this past summer, the Shepard Terrier mix started acting strangely.

"[He was] very dehydrated, lethargic, muscle pains," said Leo. "It was hard to even stand up in his crate in the morning. We had to lift him up and take him outside to go potty."

After visiting three different veterinarians, the Perez's were told Bogey had leptospirosis, a bacteria illness that infects dogs, and can potentially cause acute kidney injury.

Veterinarian Dr. Jenna Olsen said, “Generally with treatment, we're going to have a 70-80 percent survival rate. Unfortunately, there will be dogs diagnosed too late or who may have concurrent illnesses that don't make it."

Olsen is a veterinarian at B Street Veterinary Hospital in Golden hill, where she's recently seen an increase in cases.

"In this hospital alone, we've had about 15 positives since October and in the 10 years I have been practicing prior to this, I had probably only seen three," said Olsen.

Leptospirosis is spread through contact with urine from an infected dog. Rodent urine can also be a carrier.  Locally, cases have been traced to boarding facilities, dog parks and beaches. It can be transmitted to humans as well.

Symptoms include a decreased appetite, vomiting, diarrhea, lethargy and/or muscle stiffness, severe muscle pain, inability to have puppies and depression.

So how do you prevent it? Olsen said the answer is with an annual vaccine.

Olsen suggested talking to your veterinarian.

As for the Perez's, Bogie was treated with fluids and antibiotics, and back to his old self. He turns a year next week-a celebration in more ways than one.

Olsen believes local boarding facilities may start requiring the vaccine as soon as next year.

Generally, younger animals are more seriously affected than older animals. If you think your pet may have Leptospirosis, contact your veterinarian immediately. Your veterinarian can perform tests to determine whether or not your pet has the disease.

Treatment in Pets information from the CDC:

If your pet has been confirmed by your veterinarian as having leptospirosis, the appropriate action to take will depend on the nature of contact with your pet. Normal daily activities with your pet will not put you at high risk for leptospirosis infection. Types of contacts that are considered to be high risk include:

If you have had these types of high-risk contacts with your pet during the time of its infection, inform your physician. If common symptoms, such as fever, muscle aches, and headaches, occur within 3 weeks after a high-risk exposure, see your physician. Tests can be performed to see if you have this disease.

Leptospirosis is treatable with antibiotics. If an animal is treated early, it may recover more rapidly and any organ damage may be less severe. Other treatment methods, such as dialysis and hydration therapy may be required.

The time between exposure to the bacteria and development of disease is usually 5 to 14 days, but can be as short as a few days or as long as 30 days or more.

The SDCVMA has recently seen an uptick in reports of leptospirosis in the area. Our hospital can provide a safe preventative vaccine that will protect your dog from this disease. If your dog hasn't received it or is due for an update, call us today to schedule an appointment! pic.twitter.com/HdAgtDQg7Y