Dr. Willie Morrow started as a San Diego barber in 1959 to owning California Curl Company which created the “Jheri Curl” before it was made popular and the Afro pick 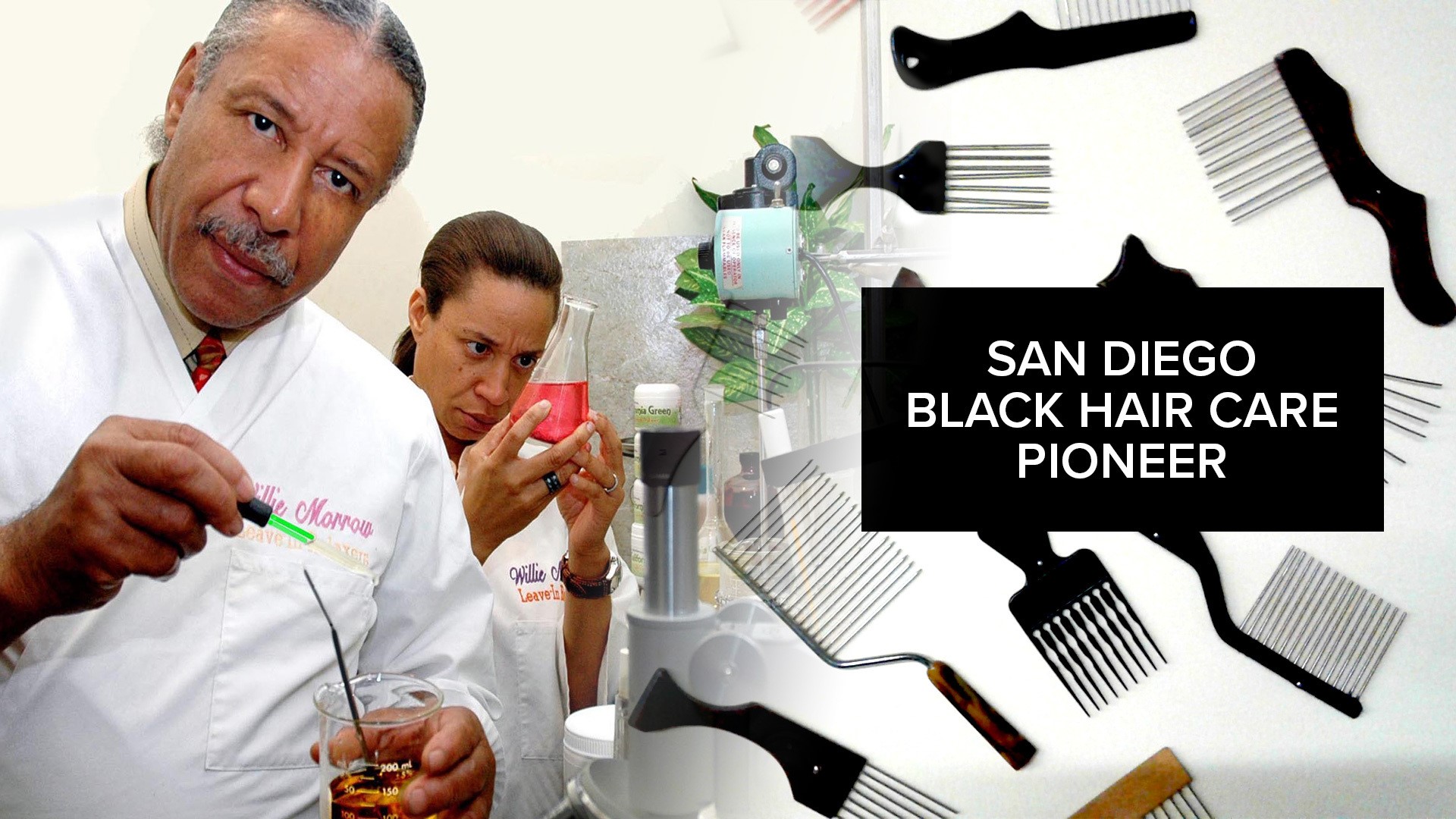 SAN DIEGO COUNTY, Calif. — At 4165 Market Street in San Diego, there stands a center for employment training, but right up until the mid-1990’s, the 2-story building was the very site for Dr. Willie Morrow’s barber shop and hair empire.

"He wanted everything a complex, he wanted downstairs, a salon and the beauty parlor, and then he had on the west end, the newspaper, and then above that on the second floor, he had the radio station,” said Morrow’s daughter Cheryl Morrow.

Cheryl Morrow smiles as she reflects how her father rose from poverty to creating a multi-million-dollar hair empire.

"My dad at one point had about 220 employees,” Cheryl said.

Born in Tuscaloosa, Alabama as the son of sharecroppers, Willie Morrow was a self-taught barber and chemist, who knows hair like the back of his hand and would say “I'm a hair guy, Black hair, straight hair, curly hair, wavy hair you name it.”

Morrow was featured by KPBS in 2016 at 76 years old at the museum exhibit in his honor at the California Center for the Arts, Escondido. His humble hair beginnings started in 1959 in a red velvet barber chair, where he cut the local Black leaders hair including the first Black judge in San Diego County, Judge Earl Gilliam, and even Michael Jordan.

Morrow traveled around the world in the 1970s, contracted by the Department of Defense to teach and cut hair on military bases and in war zones, where he also wrote several hair styling and barbering technique books.

"He had textbooks that showed how and pictures and manuals, and he did a magazine called “Curly Cues” for the military,” Cheryl said.

Outside of Willie Morrow's iconic barbershop in the 1960’s to 1990’s on Market Street, stood a 10-ft. tall Afro pic, the tool he came to invent.

"He cut off a comb that he was given a U.S. utility patent for called the Eze-teze, and then he cut those teeth off and put it on a blow dry nozzle snout, nailed it and then that served as the blow dry nasal comb, where you had a comb at the end of your blow dryer,” Cheryl said.

Morrow's face was also featured on the products, and he had an on-screen role in Chris Rock's movie "Good Hair" in 2009.

"He was truly not just the barber, but he was the scientist, so he could make up stuff,” Cheryl said.

Always inventing, Morrow is said to have originated the popular 1980's hair style the “Jheri Curl” before its namesake creator Jheri Redding.

Cheryl says "Mr. Morrow's curl version, is eight years before the commercialization one we know as Jheri.”

Not stopping there, Dr. Morrow made it into media, starting the San Diego Monitor in 1986, which Cheryl said was a way to give affordable advertising to Black businesses.”

Cheryl now takes over the newspaper and oversees the California Curl Company. In 1979, Willie Morrow ran San Diego's first Black radio station 92.5 for over a decade before the economy shifted.

"It began to decline, I think that is one of my father’s regrets, you know, the not being able to carry on Black radio,” Cheryl said.

Cheryl carries on the torch in her father's retirement, managing and storing his hundreds of hair tools and equipment, some of which are now being featured at a museum in Kent, Ohio.

From hot combs and curling irons to cast-iron thermal ovens from the late 1800's, the family has a warehouse filled with hair relics.

Cheryl does a podcast called "Willie’s Barbershop," which highlights her hair hero, her father, who is a San Diego Black hair pioneer and retired at 82 years old.

"Mr. Morrow prides himself, he says he never used his Social Security number, he doesn’t know, he didn’t have a Plan B, and so he goes all in when you have a dream, and that is to me the ultimate legacy,” Cheryl said.