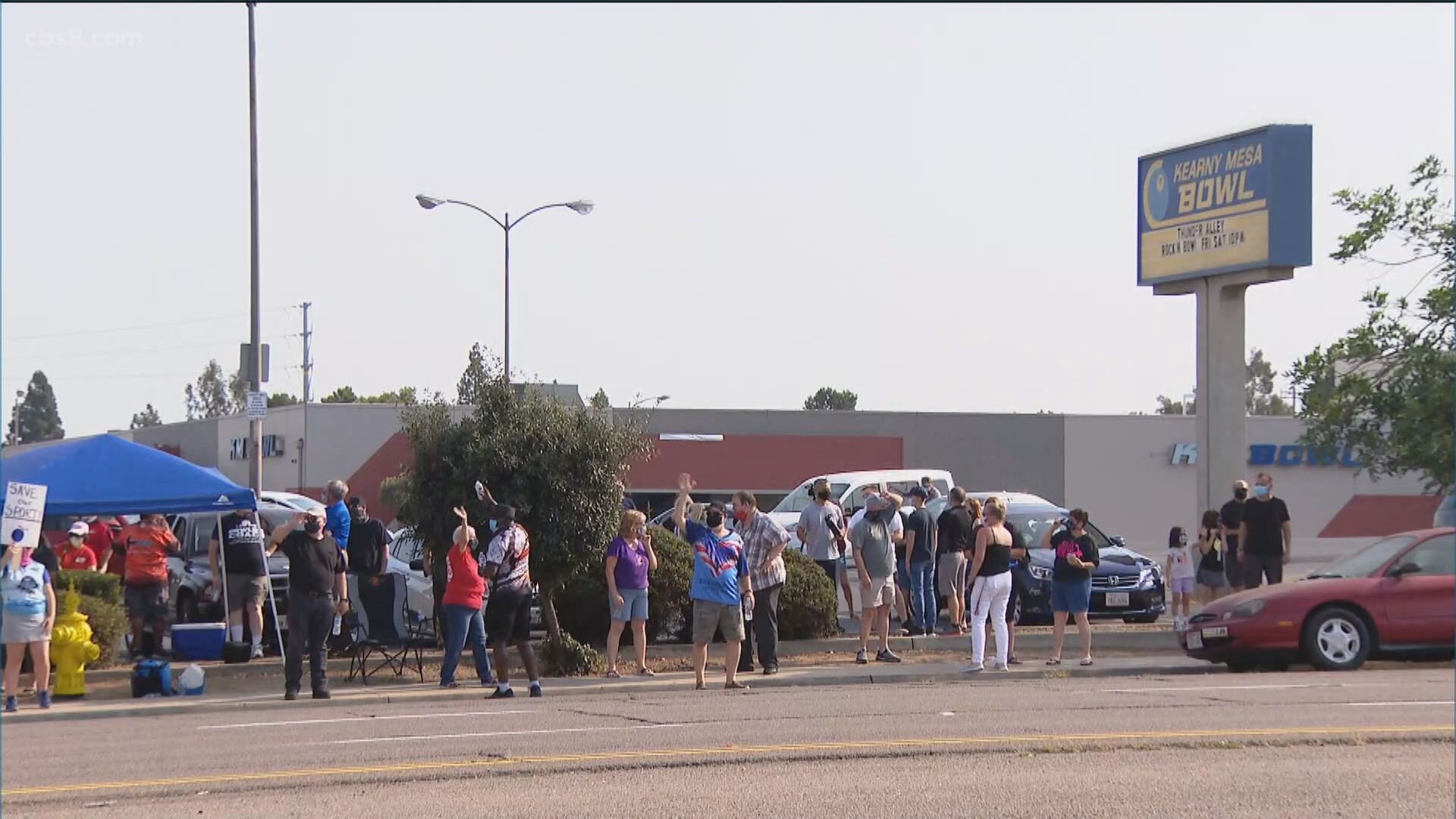 SAN DIEGO — San Diego bowling enthusiasts are asking Governor Gavin Newsom to bring back bowling in California, not only because they miss the sport -- they say it's about survival.

On Wednesday afternoon, they held a rally outside of Kearny Mesa Bowl. Manager Johnny Humble said the local business is in dire straits as it tries to stay alive.

Humble said his employees are also struggling to survive. He said they have gone far too long without getting paid after he was forced to shut his doors a second time four weeks ago.

"My employees the first time around... we paid them for five weeks the first time off, and then we couldn't pay anymore so we put them on unemployment and they had the extra money," Humble said.

Now, however, they're not getting the extra $600 in weekly unemployment pay, and he said many of his employees' families are falling further and further into debt.

One of his employees brought his baby to the rally.

"He's getting practically nothing and it's really tight for him. And there's many like that, and they're not doing so well," said Humble.

Kearny Mesa Bowl first shut down on March 15 and stayed closed for 91 days, along with its other bowling center Mira Mesa Lanes.

Humble said the loss from the first shutdown was tremendous, totaling more than $2 million. They saw the light in June, however, when they reopened and started earning revenue again.

In July, however, they were dealt a second strike-- and not in the positive way the term is used in bowling. Bowling alleys were among the businesses forced to close again and with no plans to reopen in sight, Humble is worried about the future of both bowling alleys.

In other parts of the country, bowling alleys are back open, with social distancing measures in place, so the San Diegans who attended the rally Wednesday are hoping to get the attention of Governor Newsom, pleading with him to let them safely open as well.

Humble said the bowling alleys literally have little time to spare, and neither do his employees.

"They're struggling at this point. I've never took anything from anybody and this has been taken from everybody. It's time to open," he said.

Since the second shutdown on July 13, the economic impact has grown to well above that $2 million mark.

News 8 has heard from many small businesses, including hair and nail salons, that have said they were able to apply for loans for the first shut down, but have had nowhere to turn for additional funding during this second shutdown.

Kearny Mesa Bowl, Mira Mesa Lanes, and countless other small businesses are hoping the governor allows them to reopen soon, or they will be permanently knocked down.