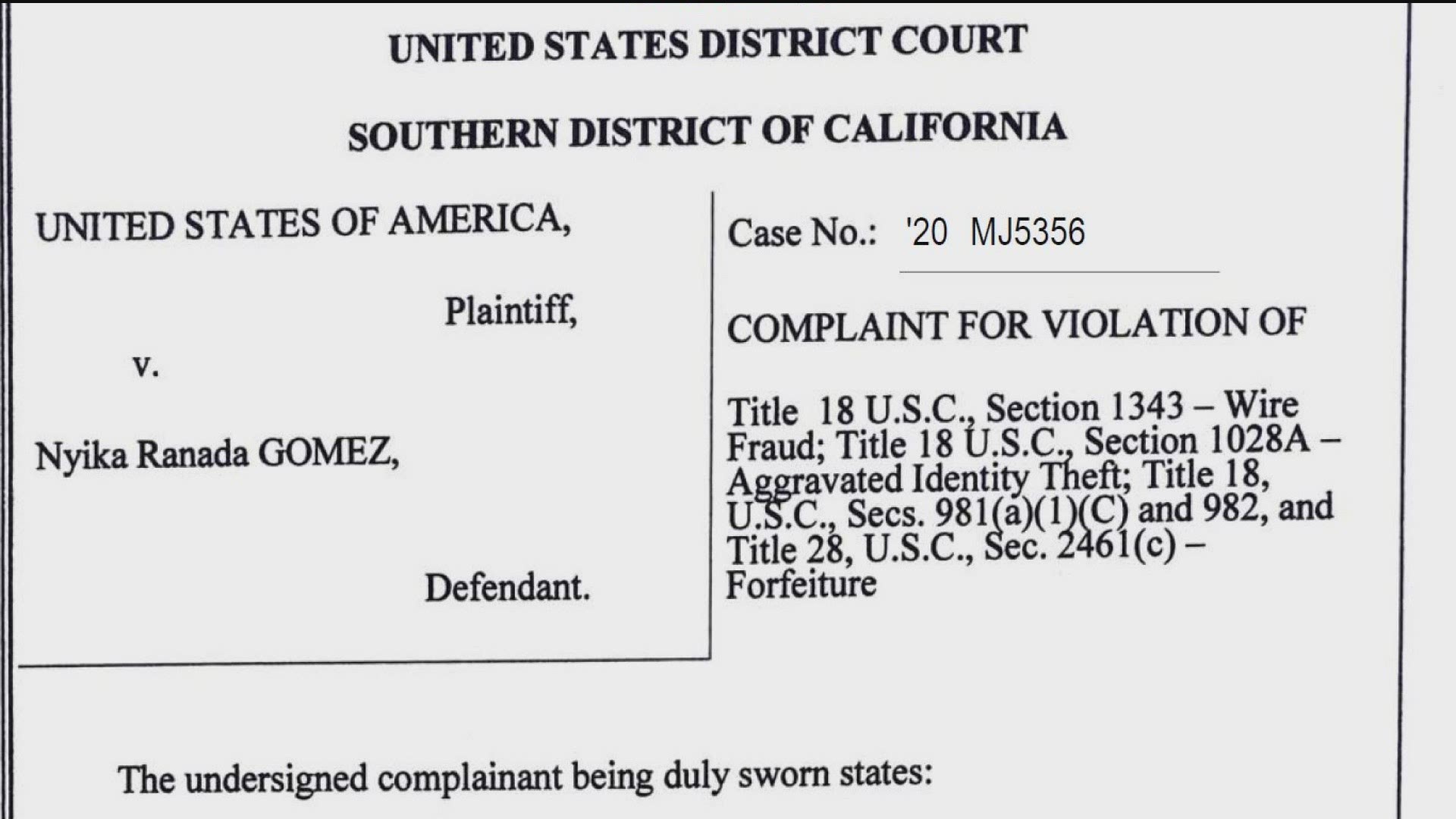 One of the defendants lives in San Diego.  The other lives in Sacramento and is accused of stealing the identity of U.S. Senator Dianne Feinstein.

But when News 8 showed up at her door, a woman who spoke to us through a window claimed we had the wrong address.

“You have the wrong door,” the woman said.

Gomez, 40, is accused of filing multiple, fraudulent unemployment claims under the names of California prison inmates.

Gomez currently is out on bail pending a criminal trial where she is facing a maximum of 20 years in prison, if convicted on all counts.

In a news release, prosecutors said that Gomez was in cahoots with her boyfriend – identified only as BT – who currently is a California prison inmate serving 94 years to life for murder.

Gomez also is a former employee of EDD, where she worked in 2020 and where, according to San Diego prosecutors, “She used her training and expertise to defraud that very program in a scheme designed to generate hundreds of thousands of dollars in stolen benefits."

“This is taxpayer money that has been provide to help our fellow citizens in a time of real need,” said U.S. Attorney Scott.

Gervais, 44, is accused of using her home address in Roseville to apply for at least 100 unemployment claims, totaling more than $200,000, according to the criminal complaint in Sacramento.

One of the identities Gervais is accused of stealing to apply for EDD benefits is that of U.S. Senator Dianne Feinstien.

Scott said this is just the tip of the iceberg when it comes to EDD fraud cases across California.

“I am confident that this will turn out to be the largest fraud scheme ever perpetrated on the taxpayers in the state of California,” Scott said.

The question is, how could so many fraudulent EDD claims be paid out to so many unverified people?

The newly-hired director of EDD said the COVID-19 pandemic is partially to blame.

“Should people be pissed off because they did everything right and then EDD screwed up?  Of course, they should be.  You can't blame them for that,” said Rita Saenz, who was hired as EDD director about a month ago.

At an audit hearing earlier this month, Saenz told lawmakers that EDD let its guardrails down early in the pandemic in order make payments more quickly to millions of unemployed workers.

Letting the guardrails down led to massive fraud, currently estimated to be between $11 billion and $30 billion.

In response to massive fraud, the agency launched ID.ME to verify identities; and also instituted cross-checking policies to make sure prison inmates can no longer claim unemployment benefits.

“I've seen problems like this in other departments, and I am confident that they can be fixed,” Saenz said.

“We've got essentially a very well-oiled machine, which is investigating and prosecuting these EDD fraud cases and that machine will continue to march forward,” Scott said.

News 8 reached out to defense attorneys representing the two women charged in San Diego and Sacramento.  Neither attorney responded to requests for comment.