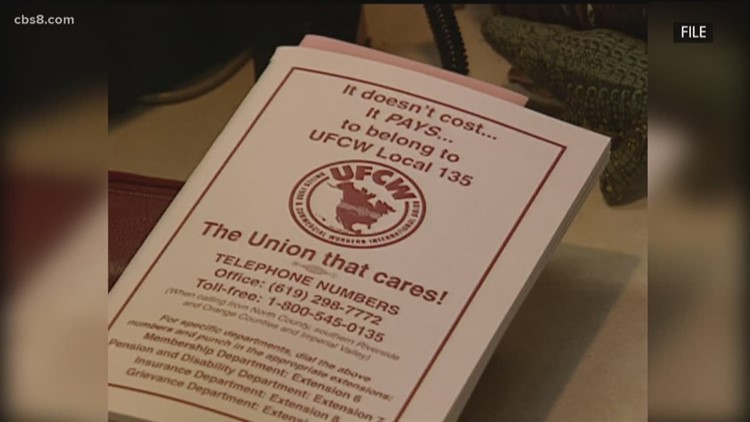 SAN DIEGO — Unionized grocery workers in San Diego County and throughout Southern California raised the threat of the first grocery strike in the region in nearly 16 years by overwhelmingly voting to authorize a work stoppage unless a contract agreement can be reached, union officials announced.

Roughly 97% of the roughly 7,500 employees at Ralphs, Albertsons and Vons stores throughout the San Diego area who are represented by United Food and Commercial Workers Local 135 voted in favor of the authorization, the union announced.

Local 135 members voted Monday and Tuesday, as did nearly 40,000 other grocery workers represented by a total of seven UFCW locals around Southern California and parts of Central California, to authorize a potential strike.

Albertsons/Vons/Pavilions issued a statement saying, "The outcome of the strike authorization vote does not change anything related to this process. We remain committed to negotiating a contract that is fair to all parties, including our employees, and will continue to work to achieve that."

Ralphs issued a similar statement and said, for now, "it is business as usual in Ralphs stores."

The strike authorization vote means union negotiators have the power to call for a strike, if deemed necessary, but it does not automatically mean a walkout will occur.

Local 135 representatives could not be immediately reached for comment.

John Grant, the president of Los Angeles' UCFW Local 770, said the union plans to meet Thursday with picket captains to discuss "various forms of economic protest" to oppose the failure of negotiations and to try to "get these companies back on the right path to provide a fair contract." The job actions could include asking customers to boycott stores, Grant said.

The next bargaining sessions involving the union and the companies are scheduled for July 10, 11, and 12, Grant said.

The contract between the union and the companies expired in March. That pact was approved by workers in 2016 and included annual raises for most workers, along with increased pay for entry-level cashiers and concessions on holiday pay and retirement age, union officials said at the time.

On Wednesday, union officials said the most recent contract offer made by the grocery companies included wage increases of less than 1 percent and nearly 25 percent cuts in cashier wages.

The labor dispute raises fears of a repeat of the 2003-04 Southland grocery strike that dragged on for 141 days. That work stoppage was estimated by some analysts to have cost the supermarket chains as much as $2 billion, with locked-out workers losing $300 million in wages.