Fast-food workers in San Diego and around the country are scheduled to conduct a one-day strike Thursday to press their demands for pay of $15 an hour and the right to unionize. 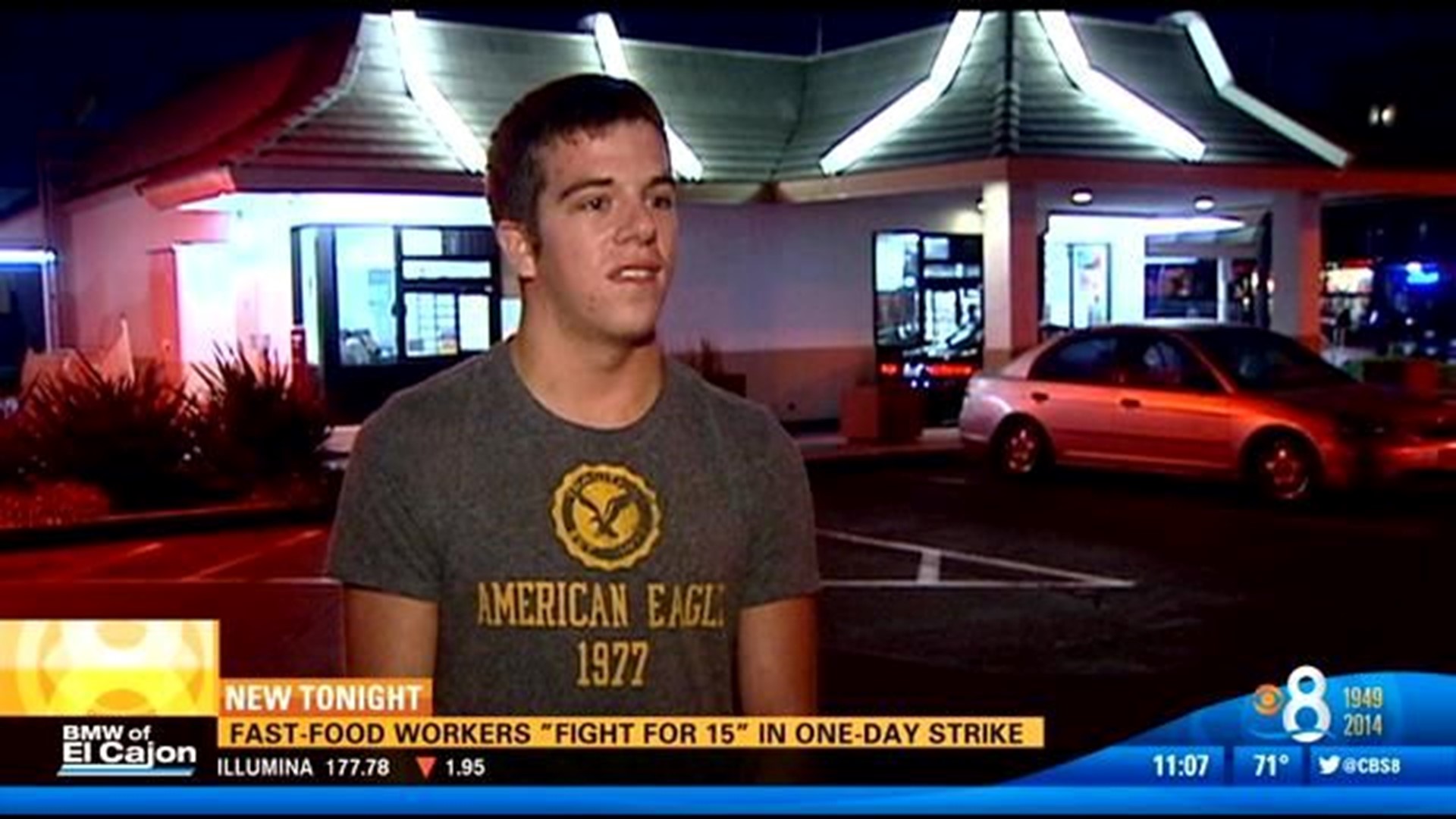 SAN DIEGO (CBS 8) - Arrests were made in San Diego Thursday as fast-food workers staged a strike in conjunction with a one-day nationwide campaign called Fight for 15.

Hundreds of people marched from a McDonald's in City Heights early Thursday morning, then to a nearby Burger King and Jack in the Box. At one point during the march, San Diego police officers arrested 11 people who sat in the middle of University Avenue. Their names were later read to a crowd at a rally, where they were cheered for what organizers called an act of civil disobedience.

"They said, what we're willing to do is get arrested today to being attention to the fact that everyday working families are making incredible sacrifices. So they're standing up for all of us today and they're fast food workers here in our community," Richard Barrera of the San Diego Labor Council said.

Employees are demanding $15 an hour plus the right to unionize.


"I want to enjoy life. I've been homeless a lot because I can't afford rent," said Jay Ames.


He and his co-worker Starlen Henry work at a Hillcrest McDonald's, and say hours are cut weekly and they don't have protections like a union.

Economist Alan Gin says while some people would definitely benefit from a much higher minimum wage, others would be hurt by job loss and higher prices. Still, he says, the face of minimum wage is changing. It's no longer just teenagers looking for a first job.

"You know, that's the way it used to be, but what we saw in the last recession is that we lost a lot of good jobs in middle management and other places, and so a lot of workers now can't get jobs that pay similar amounts anymore," he said.

In addition to the San Diego march, organizers said similar job actions are scheduled to take place in anywhere from 100 to 150 cities nationwide, though it's unclear how many workers will participate.

Fast-food employees, with backing from the Service Employees International Union, have been making their case for higher wages for about two years now.

Jason Roe with the San Diego Small Business Coalition who's petitioning the city's $11.50 minimum wage says this high of a raise will force franchises to shorten hours, cut jobs and increase prices.

"The fast-food industry cannot absorb an increase of that size," Roe said.

Minimum wage supporters argue the eateries aren't run by teenagers like in the old days, but by adults with children and other financial responsibilities. According to Payscale.com, fast-food employees' average hourly earnings range from $7.16 to $8.95 an hour, depending on location.

Roe says minimum wage should not determine your career.


"Minimum wage is your entryway into the marketplace. It's where you at some point where you go to start work in whatever capacity. You get experience you get demonstrate value. You figure out how to increase your worth," Roe said.


The efforts by the workers and SEIU have been boosted by heightened awareness of what they call "income inequality" and the passage of higher minimum wage standards in the state of California and several cities, including San Diego. The $15-an-hour figure was adopted as the minimum wage in Seattle, but with some exceptions and long phase-in periods.

The movement by fast food workers was noted by President Barack Obama in his Labor Day speech.


McDonald's issued a statement saying the company respects the right to peacefully protest and that the topic of minimum wage "goes well beyond McDonald's -- it affects our country's entire workforce."


"McDonald's and our independent franchisees support paying our valued employees fair wages aligned with a competitive marketplace," the company statement said. "We believe that any minimum wage increase should be implemented over time so that the impact on owners of small and medium-sized businesses -- like the ones who own and operate the majority of our restaurants -- is manageable."


McDonald's does not determine wages set by its more than 3,000 franchisees, according to the statement.