Nineteen suspects were taken into custody today in San Diego, Los Angeles and Orange counties and several other U.S. cities in an investigation into an alleged international drug trafficking and il... 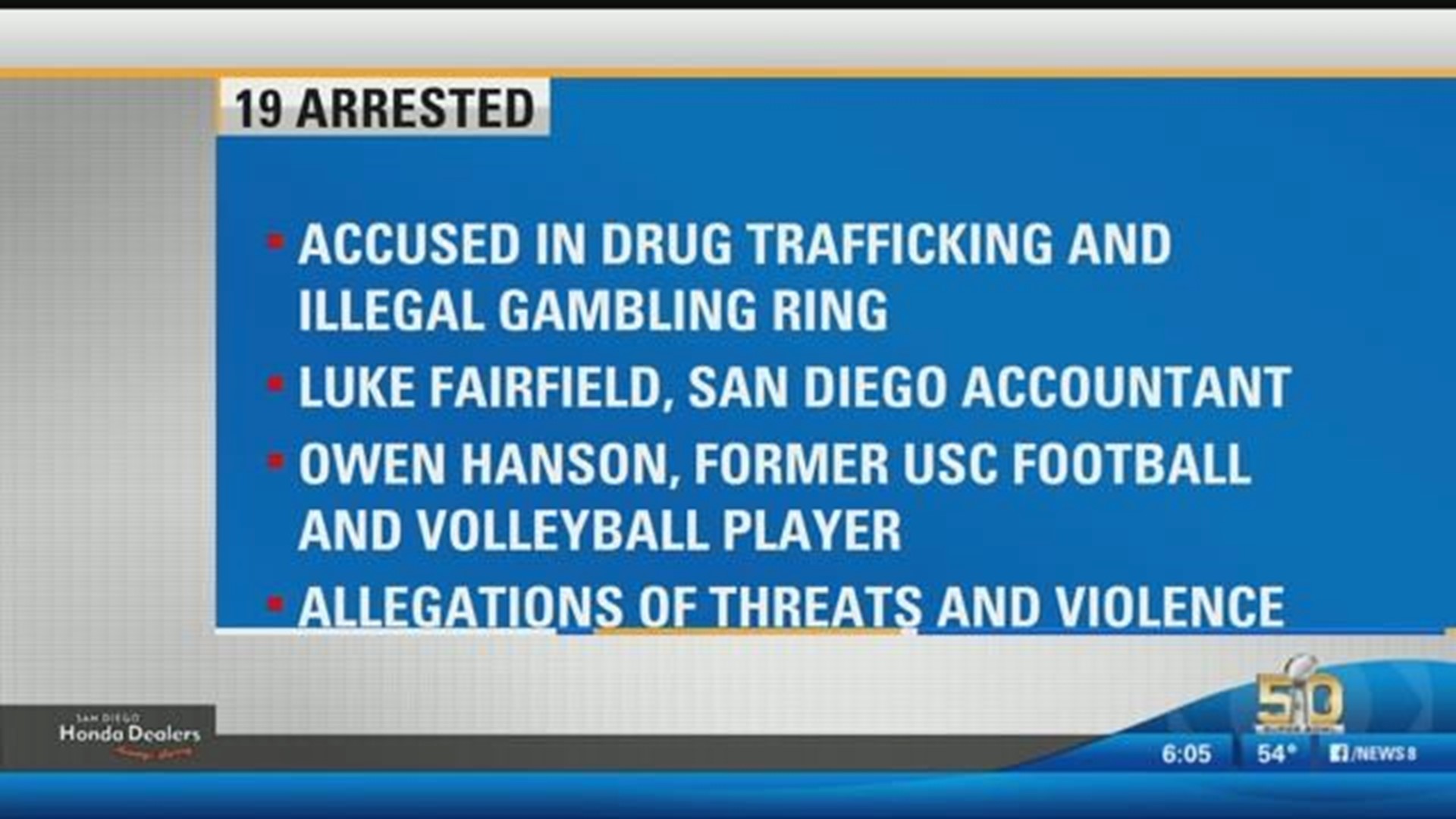 SAN DIEGO (CNS) - Nineteen suspects were taken into custody in San Diego, Los Angeles and Orange counties and several other U.S. cities in an investigation into an alleged international drug trafficking and illegal gambling ring led by a former University of Southern California athlete.

The arrestees are among 22 people charged by a federal grand jury in Southern California with participating in a criminal network that used threats - - including a DVD of a beheading and a photo of a customer's family gravestone - - and violence in an effort to collect millions of dollars worth of debt.

Owen Hanson, who was a member of USC's football and men's volleyball teams in the early 2000s, was arrested in September after allegedly arranging the delivery of five kilograms of cocaine and five kilograms of methamphetamine. Another defendant, Giovanni "Tank" Brandolino, was jailed in Brooklyn in October in connection with a separate narcotics trafficking case.

According to prosecutors, Hanson and his associates conspired to operate "ODOG," an enterprise engaged in international and domestic drug trafficking, illegal sports gambling and money laundering.

The group's network of bookies and runners extended nationally from Virginia to California, where bookies accepted wagers on professional and college football and Major League Baseball games, court documents state.

Hanson allegedly delegated some of the responsibility to operate the network to Kenny Hilinski, an expatriate living in Peru.

Hilinski maintained various websites used by gamblers to place bets, coordinated the collection of payments from bookies and gamblers, and directed the organization's runners to distribute the proceeds through shell companies and cash deliveries, according to the U.S. Attorney's Office in San Diego.

Along with threats, the illicit organization employed violence to ensure that delinquent bettors paid their gambling debts, court documents state.

The enterprise used sophisticated techniques and employed financial professionals to launder the proceeds of both the gambling and drug trafficking networks, according to the indictment.

Luke Fairfield, a certified public accountant based in San Diego, allegedly set up shell corporations and advised members of the organization on methods it could use to structure bank transactions so as to avoid detection by bank security and law enforcement.

Of these additional defendants, 13 were bookies working for Hanson, and two -- Tim Bryan, 47, and 31-year-old Marlyn Villareal -- allegedly were runners responsible for transporting gambling and drug trafficking proceeds funds on Hanson's behalf.

Along with Brandolino, Fairfield, Hanson, Hilinski and Villareal, four others -- Dylan Anderson, 33, Jeff "Jazzy" Bellandi, 49, Tim Bryan, 47, and Charlie D'Agostino, 51 -- are charged with laundering the proceeds of the organization's drug and gambling businesses by depositing funds into bank accounts opened in the names of fictitious companies but controlled by Hanson and Hilinski.

Villareal alone allegedly was responsible for the laundering of hundreds of thousands of dollars in drug and gambling proceeds.