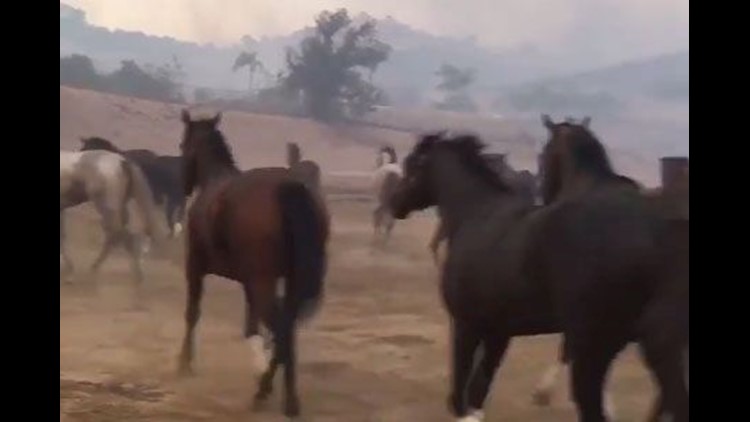 SAN DIEGO (AP) - Approximately 25 race horses were killed when a wildfire engulfed about eight barns at a training center in northeast San Diego County, the California Horse Racing Board said. Other horses that were in surrounding pastures remained unaccounted for.

Nearly 500 horses were stabled at the San Luis Rey Downs training center in Bonsall when the fire erupted amid strong Santa Ana winds Thursday, and workers risked their lives to free horses from stalls and herd them into safer areas, a board statement said.

Horses worth hundreds of thousands of dollars who are usually carefully walked from place to place were simply set free and encouraged to run away as flames engulfed the center, which is just a few miles from where the fire broke out.

Mac McBride, who was working with the center's trainers, said it was "total pandemonium when several hundred horses were cut loose."

When it was safe to bring in horse vans, surviving horses were taken to Del Mar race track.

"There was so much smoke it was difficult to see," said horse trainer Dan Durham, who got his 20 horses rounded up and was loading them into vans to be evacuated. "Some of the horses were turned loose so they could be safe. They were scattered around."

San Luis Rey Downs is home to horses that run at Del Mar and other top-flight California tracks like Santa Anita Park. Doug O'Neill, whose horses have won the Kentucky Derby and Breeders' Cup races, is among the trainers who keep at least part of their stable there.

The sign at the front calls it "Home of Azeri," the now-retired mare who was the 2002 U.S. Horse of the Year who earned over $4 million in her career.

Los Alamitos Race Course, the track where Southern California's rotating thoroughbred circuit is currently running, canceled all races Friday so that the racing community can mourn.

Horse trainer Scott Hansen said he knows some of the 30 horses he had at the facility were killed.

"I don't know how many are living and how many are dead," Hansen said. "I guess I'll have to figure that out in the morning." For now, he said he was concentrating on getting his horses that survived to evacuation centers.

Another trainer, Cliff Sise, told CBS News 8 that he saw about 10 horses die, including his own filly.

"It was dark, everything was hot and she wouldn't come out. I opened the pen and tried to get behind her and get her out, and she wouldn't get out," Sise said. "She burned to death that quick."

Dalton and AP reporter John Antczak contributed to this report from Los Angeles.