A road trip of a lifetime swings through San Diego

One man is on the road trip of a lifetime and is making a stop in Ocean Beach. 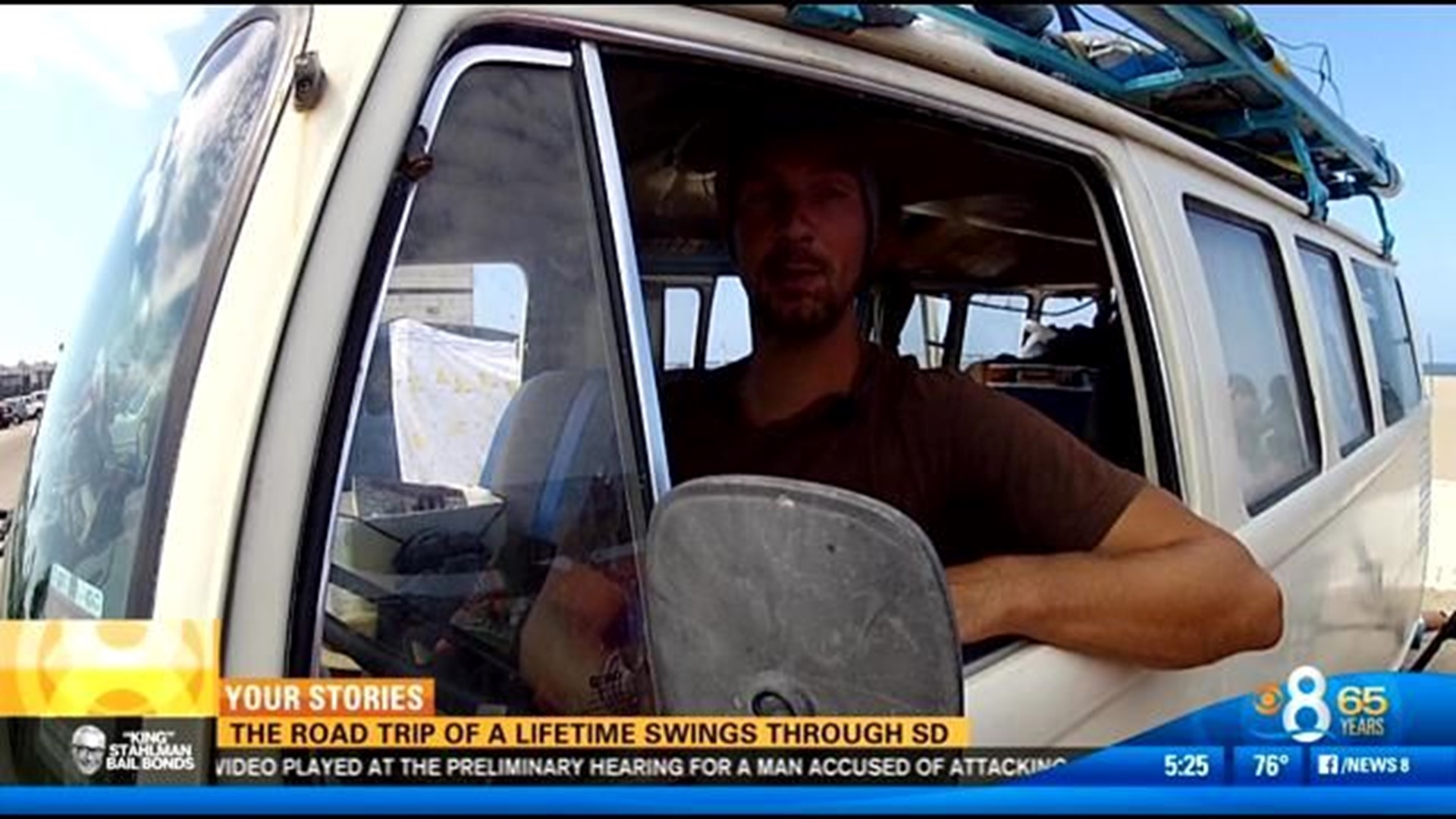 SAN DIEGO (CBS 8) – One man is on the road trip of a lifetime and is making a stop in Ocean Beach.

Ben Jamin is from the United Kingdom and started his adventure in Chile with a goal to end in Alaska. He's traveling in a Volkswagen van and stops anywhere his heart desires along the way to inspire others.

“Hasta Alaska” started in 2011 in Santigo, Chile. Jamin's goal was to travel to Chile and end up in Alaska in a year but engine problems and no end time, he's making it a three-year adventure.

“Living in this kombi basically I wake up with a million dollar view everyday,” said Jamin.

He refers to the trip as champagne view with a lemonade budget.

“Very little in my pocket, absolutely nothing. Here is about $4.50,” said Jamin.

Throughout his adventures he has taken in breathtaking views and made friendship with village people.

“Some of the happiest people I've met is the poorest people,” said Jamin.

He rescued a female Cocker spaniel mix in Peru and named her after the trip, Alaska, “She is from Peru I couldn't train her in English that would be rude.”

Jamin has traveled the world but nothing to this caliber and has had to learn Spanish to train Alaska and also learn how to be a mechanic while stranded for five months in Mexico with a broken engine.

“Having spent so much time repairing the kombi and being broken down and stranded I have had to develop patience,” said Jamin.

In many stops Jamin meets and adds new people to the trip. In Mexico Argentinean Lucio Cavalli and Australian Leah Airey hopped in the van.

“It's always been a dream to be in a kombi,” said Airey. “Everyday you meet people that that change you and make you think about things that you normally wouldn't think about."

They've been couch surfing for about a month in the van that has a makeshift water hose, a kitchen under the seat and a bed that pulls out to sleep three people.

“It's not everyone's cup of tea,” says Jamin.

But it is his cup of tea and he invites you to follow him into the world he says is your garden.

“Life can be a lot simpler I think than what people make out. People are scared of what will happen, my experience will show it's a just an adventure,” said Jamin.

Hasta Alaska has thousands of followers.

They will be in San Diego for a couple of weeks and hit the road north through California.

He hopes to make it to Alaska next year and hopes donations will help with food equipment and warm clothes for the Northwest.

The van will be sold for a dollar, all donations for the raffle will go to a charity.