Airport safety workers relieved shutdown is over, for now

Early Friday, dozens of airport safety workers protested outside terminal one at San Diego Airport – calling for the government to reopen, citing the stress of working 35 days unpaid. 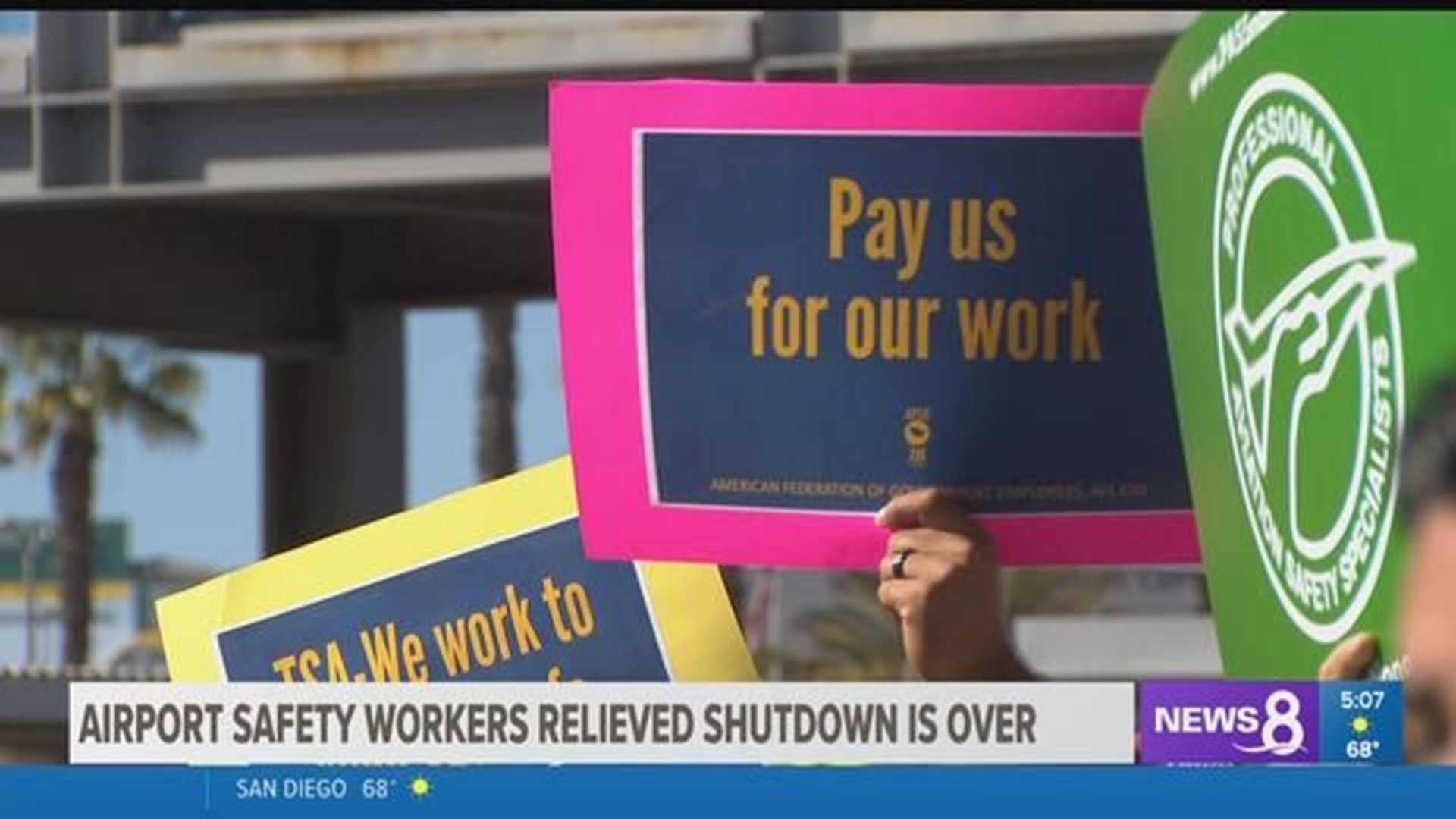 “Stop using airport workers as pawns! Stop disrespecting hardworking people. Do your job and stop the shutdown,” said one protester.

Joan Matthiesen is a professional aviation safety specialist. He said, “it is heartbreaking we have employees that have not been able to come to work with a clear mind.”

Across the country, flights were grounded at airports due to the shutdown’s strain on workers.

The mood at the San Diego airport changed once the president announced the government would re-open for at least three weeks. “It is a small victory, but it is a victory – so that is good,” said Ron Gerber, lead TSA officer.

San Diego lawmakers also sounded off after the president announced the government would re-open.

“President Trump has been very insistent on one approach. He is going to have to come off that no one gets to be king. It is a constitutional democracy. The House has a say. The Senate has a say. If he is willing to talk to us, we are willing to compromise,” said Congressman Scott Peters.

One traveler from Colorado, Pete Romenesko, said he was relieved the government was going to re-open. “It affects a lot of people in the community that I live in. I hate for this shutdown to happen, but the wall needs to happen.”

George McCubbin with the American Federation of Government Employees said, “the debate needs to continue. Border security is of the most importance, but not at the expense of the 80,000 employees.”

Matthiesen said, “three weeks is a band aid. They need to do the full surgery.”

Now the focus has turned to getting federal workers paid as quickly as possible.

They still have to process all the furlough time to get the back pay. Everything they have worked for no pay for two pay periods has to be processed before they can cut the checks,” said Matthiesen.

Federal employees are not the only ones feeling the impact of the shutdown. On Friday, News 8 also spoke to Ted Vickey - a former contractor with the government.

Back in 1995, during the shutdown under then-President Bill Clinton, Vickey owned and operation a fitness company whose first client was the White House. Federal employees would pay a fee and use the center, which would go to Vickey. He in turn would pay his employees.

When the federal workers stopped receiving their paychecks, Vickey and his staff was hit.

Unlike federal employees, the employees of contractors likely will not receive back pay because of lost business.

In the video report below, News 8's Brandon Lewis talks to San Diego spouses of Coast Guard members who are happy, at least for now, about today's announcement.

As the president Trump made the announcement to re-open the government, a CBS News camera captured the moment when the prompter stopped moving - leading him to go off script and talk about human trafficking.

He talked about the human trafficking and catch and release.

Public relations professional Jeff Marston said the does not think the president is the best speech giver, but the president's adlibs can also be a strategy to better connect with the average person.

News 8's Alicia Summer takes a look at the behind-the-scenes look at what the president was supposed to say and what he said off script.

Submitting to mounting pressure amid growing disruption, President Donald Trump signed a bill Friday to reopen the government for three weeks, backing down from his demand that Congress give him money for his border wall before federal agencies get back to work.

Standing alone in the Rose Garden, Trump said he would sign legislation funding shuttered agencies until Feb. 15 and try again to persuade lawmakers to finance his long-sought wall. The deal he reached with congressional leaders contains no new money for the wall but ends the longest shutdown in U.S. history.

First the Senate, then the House swiftly and unanimously approved the deal. Late Friday, Trump signed it into law. The administration asked federal department heads to reopen offices in a "prompt and orderly manner" and said furloughed employees can return to work.

Trump's retreat came in the 35th day of the partial shutdown as intensifying delays at the nation's airports and another missed payday for hundreds of thousands of federal workers brought new urgency to efforts to resolve the standoff.