Relatives of a missing Fallbrook family have been informed by law enforcement that their loved ones were found dead in the desert near Victorville, according to a CBS News8 source close to the family. 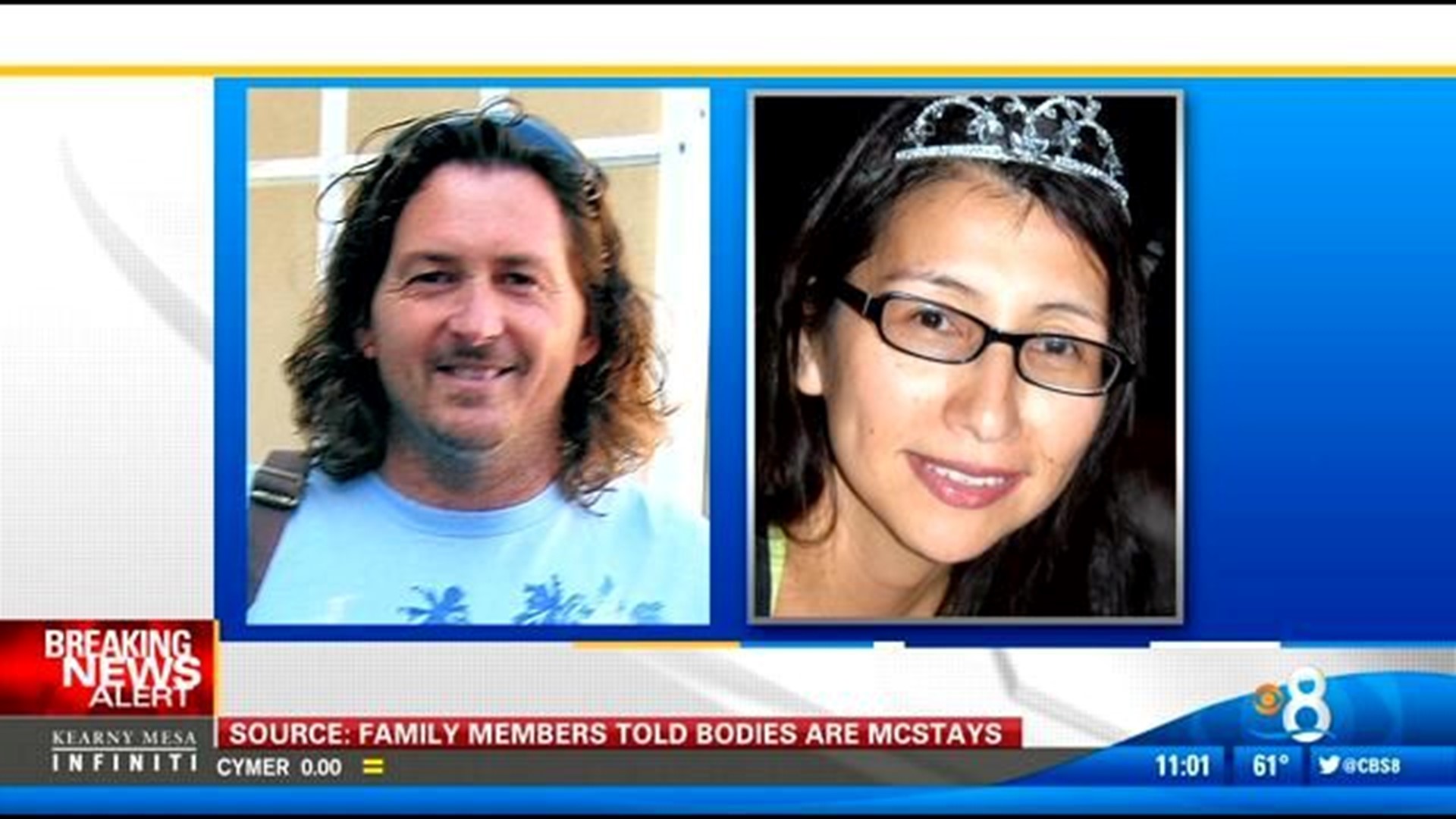 SAN DIEGO (CNS) - Four sets of human remains found in the Mojave Desert near Victorville this week are believed to be those of a Fallbrook family murdered under mysterious circumstances after vanishing nearly four years ago, authorities said Friday.

A motorcyclist riding about 50 yards from a dirt road west of Interstate 15 on Monday morning found two shallow graves containing the skeletons of Joseph and Summer McStay and two children believed to be their sons, Gianni and Joseph Jr., San Bernardino County Sheriff John McMahon said.

Dental records confirmed the couple's identities, and detectives have concluded that all four were homicide victims, McMahon told reporters in a late-morning briefing. Authorities expected to identify the juvenile remains soon through DNA comparisons, he said.

The sheriff, whose agency has taken charge of investigations in the case, declined to disclose how the McStays might have been killed and said no suspects had been identified.

The last known confirmed sighting of the family was on Feb. 4, 2010. The then-40-year-old husband, who owned a decorative-fountain company, his 43-year-old wife and their sons, ages 4 and 3, appeared to have left their northern San Diego County home in haste, according to investigators.

Deputies found the family's two dogs at the house, and nothing inside suggested the couple and their children had gone on a vacation or other routine trip. A carton of eggs was left on a kitchen counter, according to sheriff's officials.

A few days earlier, the McStays' white Isuzu Trooper had turned up near the U.S.-Mexico line in San Ysidro with one of the boys' asthma medicine inside the SUV.

Among few possible pieces of evidence in the case was a blurry Feb. 8, 2010, video showing four people closely resembling the family walking across the international border into Baja California.

In response to a question at Friday morning's briefing about whether the family might have run afoul of a Mexican drug gang, McMahon said detectives had no solid theory about who might have killed the family.

"It's too early to tell whether it's cartel-related or any other suspects," he told news crews at San Bernardino County sheriff's headquarters. "We'll continue to work with San Diego (law enforcement). They provided us a couple of investigators we've been working with. But again, the investigation is early, and we have not had an opportunity to read all of their reports."

McMahon added that there also was "no information to suggest where they were killed at this point."

During the news conference, Joseph McStay's younger brother haltingly described getting a degree of closure along with the rest of his family from the discovery of their long-missing loved ones' remains.

"It's not really the outcome we were looking for, but it gives us courage to know that they're together and they're in a better place," Michael McStay said, his voice choked with grief.

Lisa Saputo lives on the same Fallbrook street as the McsStays did. She met Summer once, when the loving mother was planning a big surprise for her boys.

"And she had said she was getting puppy for her children for Christmas," Saputo said.

By all accounts, Joseph and Summer were doting parents and quality neighbors with no financial problems, no enemies and no criminal past.

"Well we have a little bit, we have since it happened. It's like, who is it? Could it be a serial killer person? Such a strange thing," Edward Dowlings said.

Neighbors say it was easier to believe the McStays picked up and went to Mexico.

"I don't think they made it down there. I think someone else put their car down there close to Mexico," a former neighbor said.

Now detectives say they don't know if the McStays ever went to Mexico or not, only that the killer has a four-year head start.