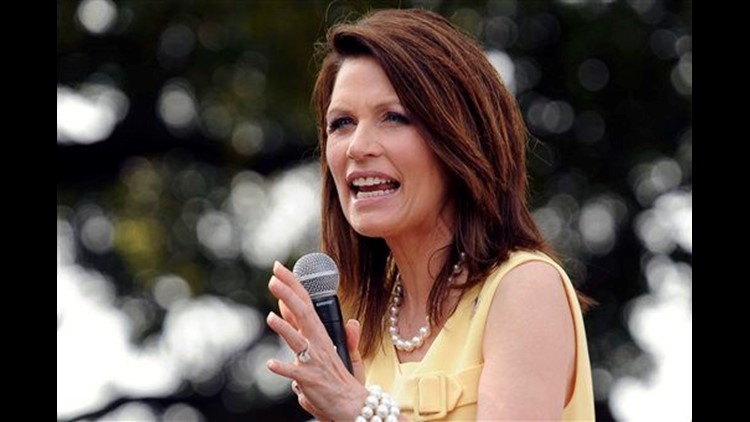 NEWTON, Iowa (AP) — Michele Bachmann declared Friday "it won't take that long" for her to start turning the ailing economy around as president as she competed against other GOP presidential rivals to build support ahead of a key GOP straw poll in Iowa next week.

Bachmann told reporters after a campaign event in Newton that the economy would start to improve almost immediately after she becomes president because she would immediately implement conservative economic policies to slash the nation's debt, rule out tax increases and cut regulations.

"It won't take that long if we send signals to the marketplace," she said, standing by an earlier comment that the improvement would begin within the first quarter.

Speaking to a crowd of more than 60 in the parking lot of a Pizza Ranch, Bachmann said Friday's economic report indicating that 117,000 jobs were created last month showed the economy remained too weak. She also said this week's plunge of the stock market was proof that an agreement to raise the nation's debt ceiling and cut spending that she voted against was "a stinky deal."

Other candidates weighed in after the stock market plunged more than 500 points on Thursday.

"We deserve a whole lot better in this country. The president's had two-and-a-half years to get it right. He has not infused enough confidence in this economy," he said, adding that the economy will remain stalled without tax and regulatory reform

Bachmann predicted the Aug. 13 GOP straw poll in Ames, the first test of candidate support in the state with the first-in-the-nation caucuses, would be a historic day. "That is the day we will make a down payment on taking our country back and making Barack Obama a one-term president," she said.

Bachmann said she wanted to do well at the straw poll but also played down expectations, telling reporters she saw herself at a "distinct disadvantage from an organizational standpoint" because she'd only been in the race for two months, less than some rivals such as former Minnesota Gov. Tim Pawlenty.

The Minnesota congresswoman played up her Iowa roots — she grew up in Waterloo — and posed for pictures with Michael McDowell, a popular NASCAR driver who was signing autographs in the parking lot before a race at a local track on Saturday.

Like Bachmann, several of her rivals for the GOP nomination were campaigning across Iowa on Friday trying to find supporters and motivate them to attend the straw poll. Pawlenty was making a stop at the northeastern Iowa farm where the movie "Field of Dreams" was shot as he tries to energize his campaign.

Pawlenty, former House Speaker Newt Gingrich and former Sen. Rick Santorum were all expected to attend a GOP event later Friday in Tiffin in eastern Iowa. Earlier in the day, Pawlenty told a crowd gathered at a motel in Mason City that experience should matter most.

"As we learned with Barack Obama, there's a big difference between giving speeches and spewing out the words. Any bobblehead can stand up here and spew out the words to you," Pawlenty said. "The question is, can they do it and one of the questions is have they done it?"

The candidates were fighting to win over Republicans such as Terry Bradley, a 56-year-old Newton man who showed up at Bachmann's event. Bradley said he and his wife had been leaning toward supporting Pawlenty until they heard Bachmann.

Other candidates were expected to blitz through the state in the next week. Rep. Ron Paul of Texas, who drew nice crowds in stops this week, will campaign with his son, Sen. Rand Paul, as he tries to fire up his loyal supporters in hopes of scoring a surprisingly strong finish at the straw poll.

Former Godfather's Pizza CEO Herman Cain, who is also hoping to prove his viability in Ames, kicks off a weeklong bus tour across Iowa on Monday. Gingrich was touring a company in Johnston on Friday. Former Sen. Rick Santorum, who has been all over Iowa for weeks, was to appear at three town hall meetings on Friday.

Other politicians who could have an impact on the first-in-the-nation Iowa caucuses next year aren't competing in the straw poll. That includes the national front-runner, former Massachusetts Gov. Mitt Romney, who won the event four years ago but has decided to skip it this year as he focuses on building a national campaign and plays down the importance of Iowa. Romney is expected to return to the state next week for a GOP debate.

Texas Gov. Rick Perry is expected to get into the presidential race in coming weeks but is not competing in the straw poll. Neither is former Alaska Gov. Sarah Palin, who hasn't made a decision on whether to run but has scheduled an appearance in Iowa next month.