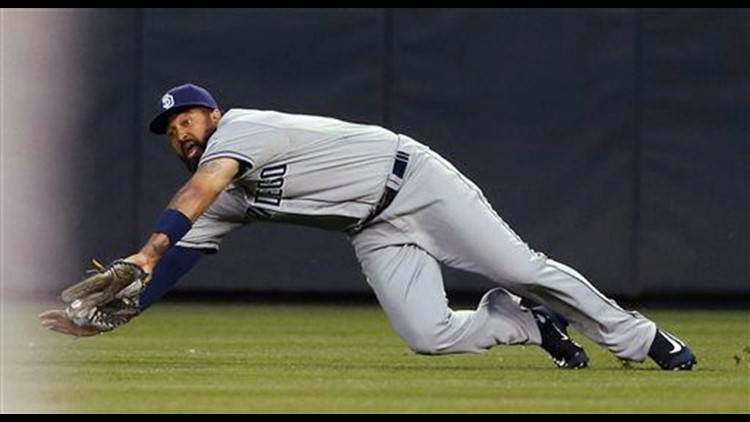 Jose Reyes added a late two-run single as the Rockies returned to Coors Field for a 10-game homestand — their final one of the season.

Bettis (8-5) worked his way out of trouble all evening, stranding six runners while striking out six. He turned it over to the bullpen after throwing 94 pitches in his fifth start since returning from elbow inflammation that sidelined him for a month.

Ian Kennedy (8-15) had an uncharacteristically so-so performance at the hitter friendly park, allowing four runs — three earned — in six innings. He entered the game with a 3.02 ERA at Coors — the top figure of anyone who's thrown at least 50 innings in the Mile High City.

John Axford got Justin Upton to fly out to end the game as he picked up his 24th save in 29 chances.

Wil Myers had a solo homer, while Melvin Upton Jr. contributed two doubles and a single for San Diego.

Nolan Arenado had three hits, including an RBI single in the seventh, scored twice and turned in another fielding gem, picking up a bunt on the run with his bare hand to easily throw out Kennedy.

Although Arenado plays on a losing team, manager Walt Weiss firmly believes his slick-fielding third baseman deserves some consideration for NL MVP. Arenado is hitting .286 with 39 homers. Above that, Weiss said Arenado, "changes the game with his defense, virtually every night. That doesn't seem to carry any weight in MVP voting — don't know why."

Arenado has another supporter, too.

Colorado scored three runs in the second, courtesy of an RBI single from Corey Dickerson and a two-run double by Garneau.

Bettis worked his way out of a bases-loaded situation in the second and later a two-on, no-outs bind in the fourth.

Padres: RHP Shawn Kelly (forearm) threw 20 pitches in a simulated game Friday. He will throw a bullpen session sometime this weekend and start next Friday against Arizona.

Rockies: RHP Tyler Chatwood (elbow) threw 42 pitches over three innings during a start for Single-A Asheville on Thursday. He allowed two runs — one earned — as the Tourists were swept by Hickory in the best-of-5 South Atlantic League championship series.

Padres: LHP Robbie Erlin will make his season debut Saturday. It's also the season debut of a lefty starter for San Diego. Seems like a good time, considering the Rockies are 8-28 against lefties this season.