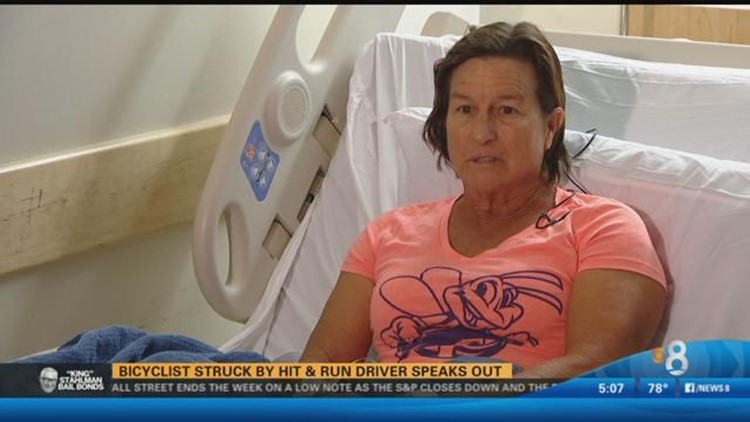 The bicyclist was identified as Carol Lord. On Friday she spoke out and said she hopes whoever caused the accident will come forward. She remains in the hospital.

She and her husband Steve were out for a typical ride when the accident occurred.

"I didn't have any warning. I was on the ground, and then the car drove away," she said.

Carol was pedaling to the east up a hill in the 2700 block of Clairemont Drive when a dark-blue compact sedan struck her from behind shortly before 8 a.m., according to San Diego police. The driver did not stop and left the area, Sgt. Ray Battrick said.

"I just saw a wheel. I mean it happened so fast and the pain was instantaneous so I couldn't even conceive what happened until I looked and said I'm in trouble now," she said.

Carol hopes to get out of the hospital room and back in the classroom soon.

Her students even sent her a gift.

If anything she wants to inspire them by finding other ways to stay active, even if it is not back on a bike.

"I feel kids need to see active adults. That's who I am, an active adult. The kids can see if I am doing it, it's a role model for them," she said.

Anyone with information that might help police identify the involve motorist was asked to call SDPD dispatch at (619) 531-2000.