California will become the first state to eliminate bail for suspects awaiting trial under a bill signed Tuesday by Gov. Jerry Brown. 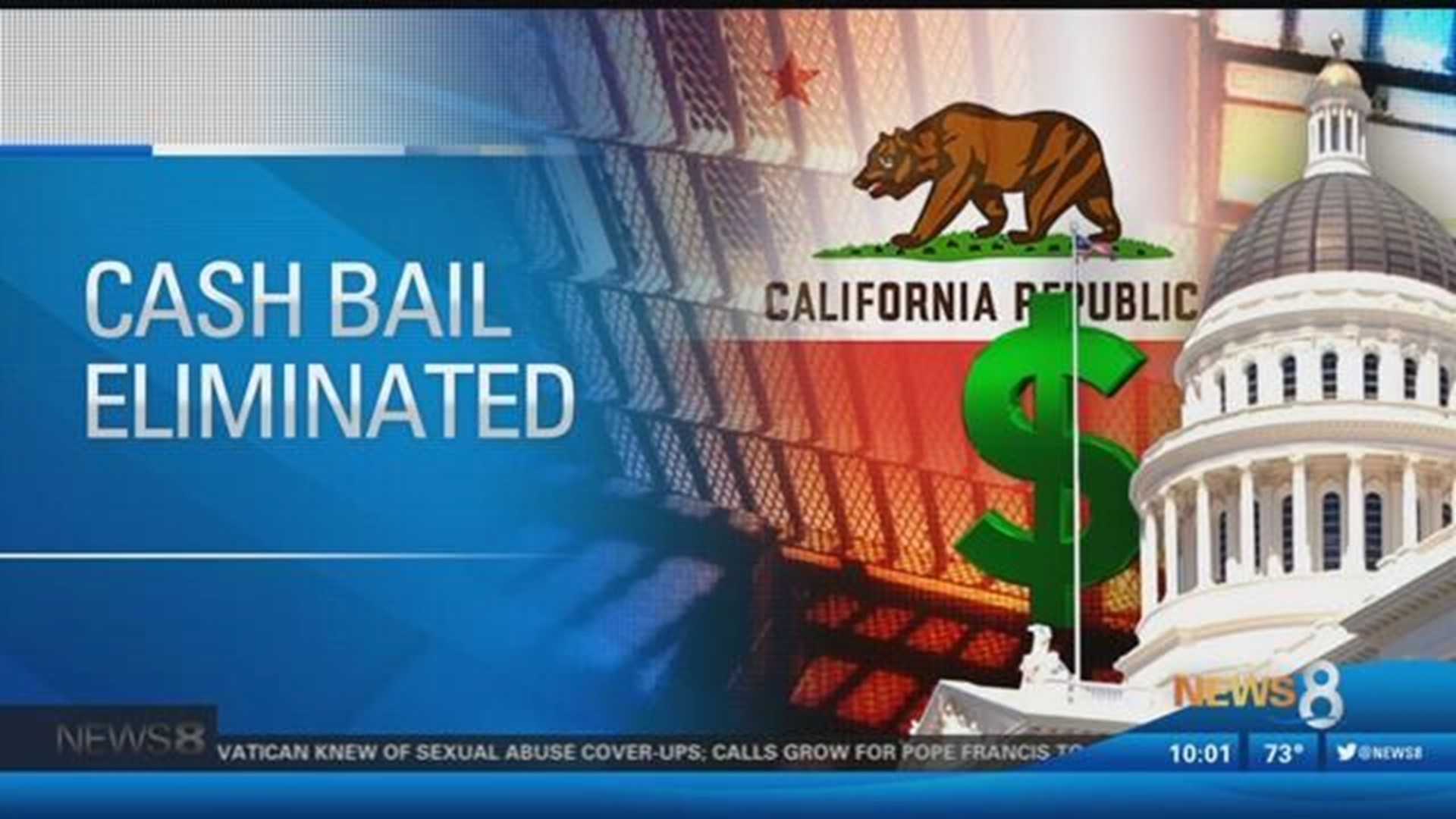 SACRAMENTO, Calif. (NEWS 8/AP) — Governor Jerry Brown signed a sweeping reform into law on Tuesday. It will replace cash bail with a risk-assessment system and allow most non-violent offenders to be released within 12 hours of booking.

Based on the council's framework, each county's superior court will set its own procedures for deciding who to release before trial, potentially creating a patchwork system based on where a suspect lives.

"This is bad, this is very bad for California,” said Wendy Zamutt. “It is expensive, [and] threatening to public safety.”

Zamutt owns Bail Bond Woman and says she will not only will lose her job along with 7,000 others, but also notes she has been fighting for two years - tweeting more than 29,000 times against legislation to eliminate bail.

"More people are going to buy guns, there will be more gun violence, you are going to have more crime,” she said.

The new law gives judges wide latitude to decide what to do with other suspects based on their likelihood of returning to court and the danger they pose to the public.

It's still unclear which suspects would fall into each category or how long they might spend in jail.

News 8 reached out to San Diego democratic assemblyman Todd Gloria who just came off the floor in Sacramento to talk about his support of the reform.

"[It] goes a long way to make our justice system more fair and equitable,” said Gloria. “I think Californians can feel secure this will improve public safety.”

“[It] does a good job balancing public safety and victim's rights with the ability to have a fair system where people are held in custody not based on how deep their pockets are but risk assessment,” said Stephan.

Still, she's concerned about some loopholes such as with DUIs where there can be injuries and “devastation.”

Anti-bail advocates such as the ACLU pulled their support saying judges are given too much power to determine risk assessment during "preventative detention" and keeps people in jail longer.

Zamutt also noted that she believes it is based against women and black people.

California's new law is the latest development in the nationwide debate over bail, which many people say unfairly punishes people for being poor. Other states including New Jersey, Alaska and New Mexico have overhauled their bail systems, although no other state has completely eliminated bail.

Advocates of the California law say incarceration should depend on a suspect's risk to public safety, not the ability to pay.

"Our path to a more just criminal justice system is not complete, but today it made a transformational shift away from valuing private wealth and toward protecting public safety," the law's author, state Sen. Bob Hertzberg, a Democrat from Van Nuys, said in a statement.

Opponents, including some social justice groups, argue the new law gives judges too much power to decide who should be released.

Gina Clayton Johnson, executive director of Essie Justice Group, which advocates for women with family members in prison, says she worries the policy will lead to mass incarceration. She said there's not enough protection in the law to ensure it doesn't perpetuate racial bias in the criminal justice system.

"This is a bill that has confused a lot of people because it does do something very positive, which is to end the bail industry," she said. "Yet what we had to trade for that win actually sets us further back."

Others, meanwhile, argue it will allow dangerous people to go free and perhaps not return for trial.

Such arguments are playing out in New Mexico after a judge decided to allow the release of several members of an extended family accused of child abuse at a desert compound.

The judge said her decision was tied to recent reforms that set a high bar for holding suspects without bail.

Her decision has caused political uproar. Prosecutors have alleged the group was training children to use firearms for an anti-government mission and are fighting to keep the suspects from being released.

New Mexico voters approved an overhaul of the pre-trial release system in 2016.

Other states have been watching California as they weigh overhauling their bail systems, said Margaret Dooley-Sammuli, who works on criminal justice issues for the American Civil Liberties Union.

The ACLU has been in talks with more than 30 other states about bail overhaul and is now advising them to avoid using California as a model because its system won't ensure due process and won't prevent racial bias, she said.

In California, overarching rules will be set by the judicial council, the policy-making body for California's courts headed by the state's chief justice.

The new law lets counties set up their own pretrial assessment agencies or run their risk assessment programs through existing probation departments.

It gives officials 24 hours to determine whether a suspect should be released before trial. That time can be extended by 12 hours if necessary.

Some criminal justice reform advocates worry defendants will spend weeks in jail while their lawyers try to prove they should be set free.

The California Bail Agents Association released the following statement on Gov. Brown's signing of the bill:

While California Bail Agents Association is disappointed that Governor Brown did not stand against the serious and deep flaws in Senate Bill 10. We will continue to voice our concerns about this bill and how it violates the United States 8th Amendment  and California State Constitution right to bail under Article 1 Section 12. All we can do now is move forward and evaluate all of the legal and other options we have to stop Californians from being exposed to a social experiment that is doomed to fail.