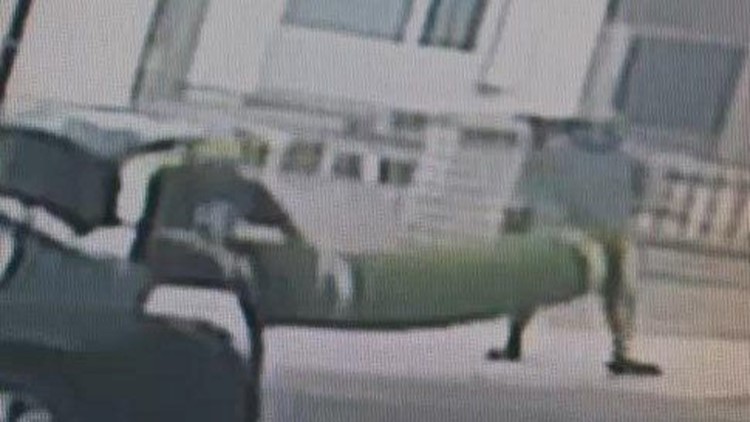 Caught On Camera: Thieves take off with turf from Paradise Hills home

Caught On Camera: Thieves take off with turf from Paradise Hills home

SAN DIEGO NEWS 8) — In a surveillance video captured Sunday morning outside a home in Paradise Hills, two men are seen pulling up, rushing into the yard and scooping up more than a 12 foot long spool of turf.

To make their getaway the men tried to stick it in the trunk, but it's a bit too big.

Madonna Hanes' contractor dropped off the spool of turf to landscape her front yard.

The spool was also partially hidden by a fence.

“You wouldn’t know it was here unless you were tipped or walked by,” said Hanes.

When she woke up Saturday morning the turf was gone.

“The first thing I thought was, ‘my god, my neighbors probably have that on tape,” said Hanes.

Sure enough, they found the video after four hours of searching.

"I couldn’t fathom that they would steal it in broad daylight,” Hanes said. “They tried to stick 16 feet of turf in a trunk that’s only two feet deep - it made no sense to me.”

In the footage, the two men pull up in a black Nissan Altima, walk straight to the turf, they struggle a bit with the weight, but less than two minutes later take off with most of it hanging out the back.

“I feel sick to my stomach. I didn’t eat all day,” said Hanes. “I just moved here. It's the worst feeling; you buy a piece of property and you're being robbed already of things on your property.”

Hanes says the pair left bits of turf on the street as they drove away. She tried to follow the trail but lost it about a block away.

She's hoping someone recognizes the vehicle or two men

"I can’t catch them just yet but at least I saw how they did it,” said Hanes.

She also called police to report the stolen turf - valued at more than $900.

Hanes just moved into the home a month ago and says the pair also took a sense of security.

“It'll take me some time, however I think I’m going to be a good candidate for some video cameras on my own property now that neighbor’s footage gave me peace of mind,” she said.