The suspect wanted in the shooting of CBS News 8 Sports Director Kyle Kraska surrendered to authorities after a standoff in El Cajon just before 10 p.m. Tuesday evening. 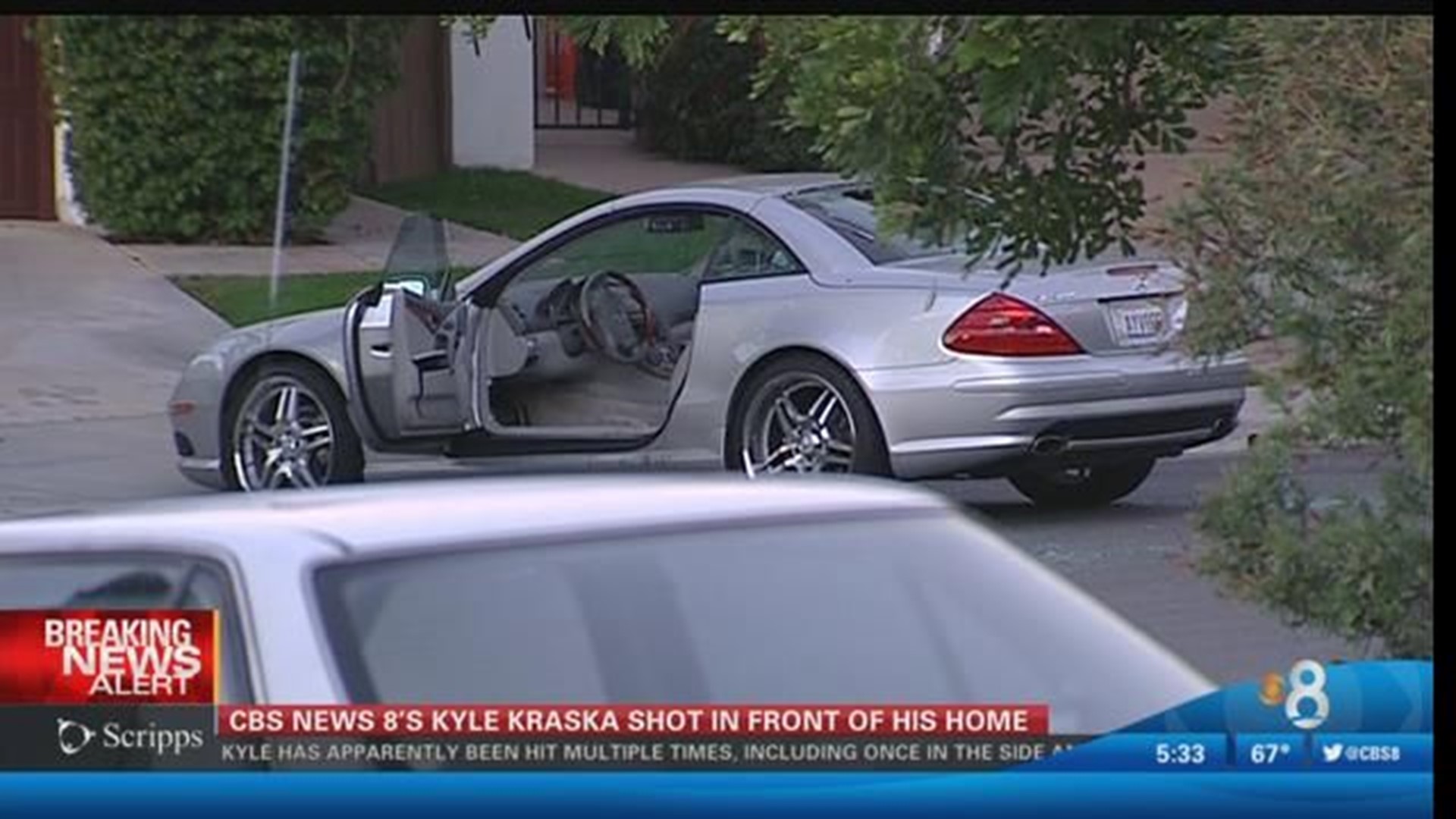 
SAN DIEGO (CBS 8) – Just over one week after being shot six times in front of his home,
CBS News 8 sports director Kyle Kraska
has been released from the hospital and is continuing his recovery at home.


"Dear family, friends and loved ones here in San Diego, across the country and in some cases even abroad,


I can't thank you enough for all the prayers, blessings and well-wishes that have been pouring in over the past eight days. After awakening from a four-day medically-induced coma, I have begun the long process of healing. Every morning I read your comments on CBS8.com. I read them all and they give me the inspiration and strength to take on the biggest challenge of my life. I am happy to report the remarkable news that I was released from the hospital today and now my fight will continue from home with my family. Thank you for lifting me up on your shoulders when I needed you most. I have been proud to serve you for the past 15 and a half years and look forward to re-joining my KFMB family as soon as I can."


The suspect, 54-year-old Mike Montana, was arraigned for attempted murder on Tuesday, February 17 and
entered a not guilty plea
. His bail was set at $750,000. During his arraignment, prosecutor Rebecca Zipp said Montana intended to kill Kraska, but there was no comment on what kind of gun he allegedly used. Zipp said that Kraska was shot six times, including once in the torso. Montana Faces 37 years to life if convicted.


Montana surrendered to a SWAT team on February 10, just hours after the shooting in the
12000 block of Avonette Court
in Scripps Ranch. According to witnesses, the incident began when shots were fired into the rear window of Kraska's silver Mercedes. The confrontation then spilled onto the street, where more shots were reportedly fired before the suspect fled.


A neighbor told CBS News 8 that he saw Kraska lying face-down in the street. His neighbors, including a nurse and an off-duty officer, came to his aid before an ambulance arrived and transported him to the hospital.


[STORY: Off-duty officer who aided Kyle Kraska: 'It was surreal']


On the day of the shooting, police were called after Montana's neighbors recognized his white minivan with the words "Superior Painting" on the side in front of his residence in El Cajon. A man living next door to Montana said he saw an alert on the CBS News 8 app and on social media, prompting him to call 911.


"I went straight to the house to knock on the door to confront the owner to say 'Hey is this in fact the gentleman that, you know, you rent a room to' and let her know hey they're looking for him and I'm calling the police," said one neighbor.


Following a standoff, Montana, wearing jeans, a dark sweatshirt and beanie, exited his residence with his hands up and was taken into custody. Several residents were evacuated during the police operation.


"We were able to get a very dangerous suspect in custody relatively quickly. Nobody else was hurt," said Lt. Scott Wahl with the
San Diego Police Department
.


Kraska's friend and CBS News 8 Sports Producer Todd Villalobos says Kraska met Montana while he was doing paint work for some of Kraska's neighbors. He hired Montana to paint the outside of his house, but then became dissatisfied with the work. Kraska then paid Montana for the work that had been done and the two agreed to part ways.


Months later, Montana began leaving notes on Kraska's door that escalated into the confrontation on Tuesday.


Montana reportedly used to live illegally in a storage unit at Gillespie Field in El Cajon. CBS News 8 spoke with a former neighbor of Montana's, who said he had run-ins with him. The former neighbor also told us he believed Montana was at one point on psychotropic medications.


"He left threatening voice mails on my son's cell phone. Not direct threats, but talking about his guns and how good a marksman he is, so, insinuated threats. It got to the point where the girls in the office didn't want to come to work. They were scared of him," the man said.


Montana also has two pending DUI charges involving driving under the influence of a drug and one misdemeanor criminal threats case that was not charged. He was out on bail when he was arrested Tuesday night.


Kraska's family is helping him on his road to recovery. On Thursday, February 12, they released the following statement:


"The Kraska family would like to extend our deepest gratitude to the wonderful residents of San Diego for the outpouring of support in the wake of this senseless tragedy. We are so grateful to the San Diego Police Department for their thorough investigation, the emergency response teams for their quick action, the Scripps Memorial Hospital La Jolla staff for their amazing care, and the Channel 8 family and viewers for their heartfelt wishes for the speedy recovery for our beloved Kyle.


The love and care was evident from the minute the shooting happened. We have the utmost appreciation for the neighbors, bystanders, most notably Sgt. Scott Bartolomei, first responders and hospital staff who so rapidly came to Kyle's aid.


We've long known Kyle is a tour de force, touching and inspiring everyone he's come into contact with during his 27-year career. It's never been clearer how many people Kyle impacted with his exuberant TV presence and dedicated reporting. The eloquent messages and memories of Kyle have been a definitive source of strength as we attempt to make sense of the situation and continue to monitor Kyle's recovery. Your thoughts and prayers are working. Kyle is healing more and more each day. He will certainly be so touched by all of your words. We look forward to sharing them with him.


We have no doubt Kyle's passion and enthusiasm will help him rise above this tragedy and return stronger than ever. Stay tuned, San Diego. Kyle will be back on air -- with his typical charm and encyclopedic knowledge of sports -- as soon as he's able."