A pile of dockless bikes in the Gaslamp Quarter is receiving a lot of attention on social media. 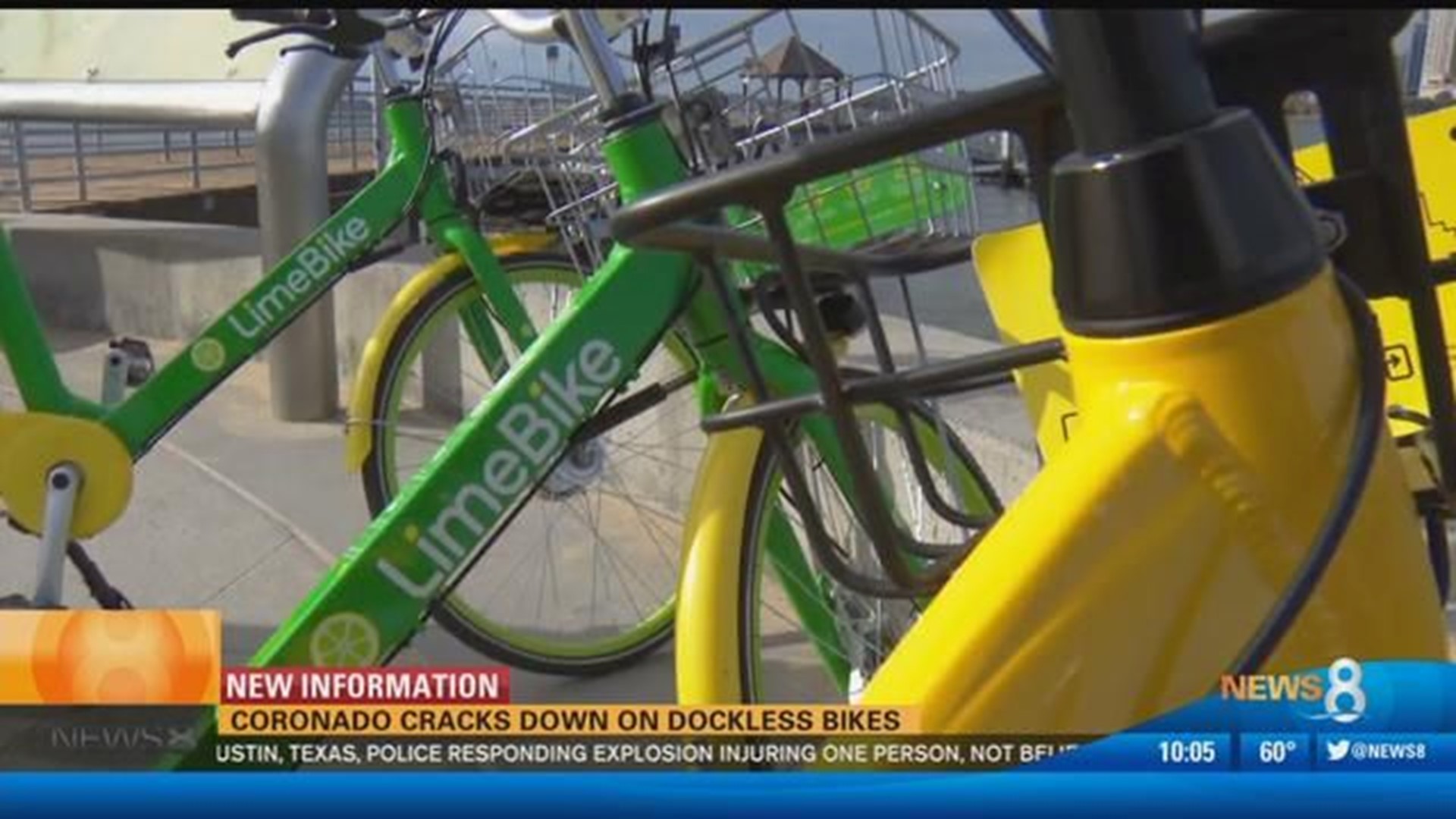 SAN DIEGO (NEWS 8) – A pile of dockless bikes in the Gaslamp Quarter is receiving a lot of attention on social media as bike sharing companies soar in popularity in the region.

The pile of bikes was seen at the corner of Fifth and Market Street, Monday night, but one place bike sharing companies are not popular is the City of Coronado.

The Coronado City Council on Tuesday night voted to declared the bikes a public nuisance, and starting Wednesday, the city will begin impounding dockless bikes left stationary on the island.

The city declared the bikes a public nuisance after several were reported "abandoned" in awkward spots.

"If people would park the yellow ones on a regular bicycle parking place, that's one thing, but they don't. They throw them on the ground. You have the green ones and the orange ones and it's basically litter," said a Coronado resident.

The city of Coronado banned bike sharing companies from operating on the island last year, but with a quick look at the app, the brightly colored bikes are washing up in Coronado.

Officials believe most the dumped bikes are coming in on Orange Avenue or across the water on the ferry.

The user-friendly bike rentals were introduced to San Diego in 2015 – with Deco Bikes.

For the past few years, Discover Bikes – which were originally branded as Deco Bikes – have had an exclusive agreement with the City of San Diego.

Bird-Electric Scooters, ofo bikes, The Yellow Bicycles and LimeBike are all bike share programs that were approved by the City of San Diego, and allows riders to drop them off in non-designated area.

The system allows users to rent from designated docking stations and later return the bicycles to any other docking station in the City of San Diego.

The city’s contract with Discover Bikes lasts through 2023.

Bike users will not be ticketed or fined, but the dockless bike companies will be - approximately $45 per bike.

Companies like ofo and LimeBikes told News 8 they plan to work with City of Coronado.

We have abided by their process, and have not distributed any bikes in Coronado. Any LimeBikes located in that area would be from San Diego residents and visitors using them to ride to Coronado. We have, and will continue, to conduct a comprehensive outreach program to ensure we're addressing any challenges and best serving the needs of the community. Additionally, we have implemented many of the best practices that were instrumental to the success of our other San Diego area markets, National City and Imperial Beach.

Ofo released the following, too:

"At ofo, we strive to empower "anyone, anywhere" with access to sustainable, convenient and affordable transportation options. We know that the dockless bike share model succeeds when there is close partnership and open dialogue with cities. We appreciate the City of Coronado's concerns and have already suggested ways in which we can more closely collaborate without requiring the use of public resources.  We look forward to continuing to work together."