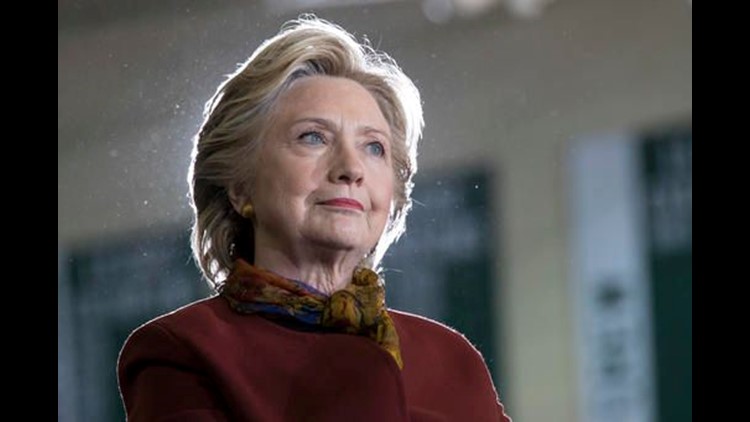 PHOENIX (AP) — There is palpable momentum for Democrat Hillary Clinton in Arizona, a state so traditionally Republican that her party's nominee for president has carried it just once in the past 64 years.

Encouraged by Donald Trump's failure to unite the GOP in Arizona, long-hungry Democrats are scrambling to capitalize in the campaign's final weeks. Should they succeed, the loss of Arizona and its 11 electoral votes would further complicate Trump's narrow path to reaching the 270 threshold to win the presidency.

"This year, we know it's much closer here in this state," Michelle Obama told supporters at a rally for Clinton in Phoenix on Thursday. Campaign volunteers weaved through the crowd, asking supporters to donate time to call voters and knock on doors.

"Just look around this room," the first lady told the crowd of several thousand. "Each of you has the power to swing an entire precinct and win this election for Hillary just by getting yourselves, your families and your friends to vote. You've got the power."

Clinton and Trump have focused their travel and advertising on the few states that have made the difference in recent elections — chiefly Ohio, Florida and North Carolina. But with preference polls tightening in Arizona, Clinton's campaign sees the state as a late addition to the list of closely contested states.

The campaign has poured $2 million into television advertising in Arizona and sent out Mrs. Obama, the brightest star on Clinton's team of stand-ins. Her appearance capped a week that included campaign stops in Arizona by Clinton's daughter, Chelsea, and Clinton's former primary rival, Vermont Sen. Bernie Sanders.

"It is possible to win it, but it is going to be razor-thin there," Clinton campaign manager Robby Mook told CNN's "State of the Union" on Sunday.

The momentum in Arizona was evident at the first lady's event, held in the same venue where Trump drew a much smaller crowd to a rally where he reaffirmed his hard-line position on immigration, which is unpopular among Arizona's Hispanic community.

That was Trump's last visit to Arizona, more than seven weeks ago. Since then, the billionaire businessman's struggles have done him no favors in the state.

GOP Sen. John McCain, running for re-election, withdrew his endorsement after the revelation that Trump made sexually predatory comments about women in 2005. This past week, McCain, the 2008 Republican presidential nominee, further denounced Trump after Trump refused to say at the final presidential debate that he would accept the results of the election. Doing so, McCain said in a statement, "is every American leader's first responsibility."

Sen. Jeff Flake, R-Ariz., went further. One of the most high-profile GOP opponents of Trump's candidacy, Flake called Trump's comments "beyond the pale."

Republican Steve Voeller, a strategist and Flake's former chief of staff, said Trump's problems have given Clinton an opening. Voeller isn't ready concede Arizona to Clinton, but he notes that Trump "doesn't have a ground game here."

"For as long as I've been watching this race, it's been within the margin of error," Voeller said. "I also think the trend lines are not good."

John Merrill is an example of Trump's problem. "Usually, I'm locked by now," said the 56-year-old salesman from Goodyear, who said he has never voted for a Democrat. "I have real concerns, concerns about Trump as a person. I'm not fully convinced he has what it takes."

Republicans have an advantage in voter registration in Arizona, but a well-organized push from Democrats has narrowed the gap in the past year.

Hispanic voters, who overwhelmingly vote Democratic, have grown in the state by more than 200,000 since 2010, according to One Arizona, a Hispanic outreach group.

It's possible that the conditions in Arizona could yield similar results for Clinton in Georgia. Republicans have won in seven of the past eight presidential elections there, but polls show a close race.

Or in Missouri, Indiana and Utah, all states carried by Republicans in recent elections.

Clinton's late play for Arizona not only demonstrates her campaign organization's strength and flexibility, but also that she could increase her electoral margin in traditionally Republican places where Trump's candidacy and policy proposals are viewed as out of step with a changing electorate.

"There's no doubt that there's a national trend at play now," said Republican strategist David Kochel, a senior adviser to GOP presidential nominee Mitt Romney in 2012 and Jeb Bush's failed 2016 White House campaign. "The only question now is where is the bottom, and how many good Republicans will be forced to join (Trump) there?"

Chart the path Donald Trump and Hillary Clinton must take on the Road to 270 to reach the White House with AP's Electoral College interactive map: http://elections.ap.org/content/road-270-0