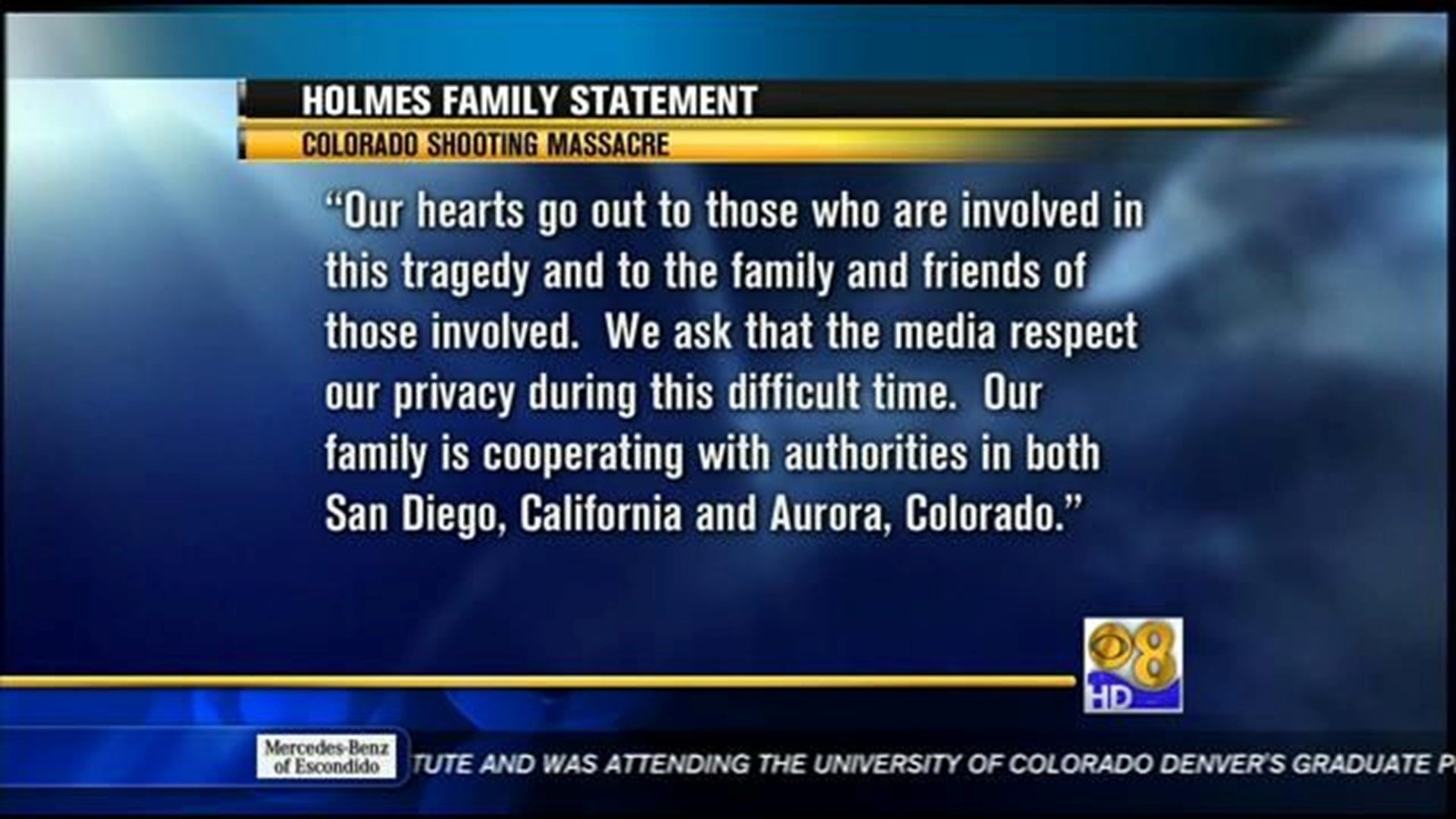 SAN DIEGO (CNS) - A graduate student accused of killing a dozen people and wounding 59 others in a shooting rampage at a Colorado movie theater early Friday grew up in Rancho Penasquitos, where his parents still live.

Around daybreak, San Diego police went to the childhood home of 24-year-old James Eagan Holmes on Sparren Avenue as news crews began to assemble outside.

Holmes, a 2006 graduate of Westview High School, is in custody in Colorado, accused of going into a midnight showing of the new Batman film, "The Dark Knight Rises," setting off two smoke or chemical bombs and spraying the audience with gunfire.

The motive was unclear.

Reporters, camera crews and officers began to gather outside the suspect's former San Diego home after ABC News telephoned his mother and confirmed her relationship to him.

"The police will be here as long as we're needed to preserve the peace of the neighborhood," SDPD public-affairs Lt. Andra Brown said. San Diego police also planned to devote "extra attention" to goings-on around local multiplexes in upcoming days in response to the Colorado tragedy, according Brown.

"Our patrol officers are directed to conduct some extra patrols at movie theaters in their commands as time permits," the lieutenant said. She noted, however, that much of the responsibility for security at the venues falls to operators.

In a statement, the Holmes family said their "hearts go out" to the victims and their loved ones.

"We are still trying to process this information, and we appreciate that people will respect our privacy," they stated.

The suspect's relatives were cooperating with authorities both in San Diego and Colorado, Brown told news crews.

Margie Aguilar, who lives across the street from the alleged shooter's family, described them as "nice" and said her son and daughter had gone to high school with the suspect.

"He should be a doctor," she said. "He should be someone you're celebrating graduating from med school, not this. It's tragic for everybody, because his life is wasted now."

Preeti Purohit, another neighbor of the suspect's family, said a friend of her daughter's had been acquainted with him when he was a teenager and described him as quiet, with "not that many friends."

STORY: Calif. neighbor of Colo. suspect says he was shy

Shortly before 7:30 a.m., officers escorted the suspect's luggage-toting father out of the home and took him away in an unmarked police sedan. Brown declined to say where he was going, but television news stations reported he was en route to Lindbergh Field to take a flight to Colorado.

Officers arrested Holmes behind the theater, near his white Hyundai, authorities said. He allegedly was in possession of an AR-15 assault rifle, a 12-gauge shotgun and two .40-caliber Glock pistols.

During the deadly rampage, which began shortly after 12:30 a.m., the gunman was dressed all in black and wore what appeared to be a bulletproof vest, riot helmet, other "tactical" protective equipment and a gas mask, according to witnesses.

Ten people died inside the auditorium, and two others succumbed to their injuries at hospitals, according to Oates. The wounded - including at least one Navy sailor and two Air Force personnel - were taken to six hospitals, many in critical condition, the chief said.

The theater is about five miles from Holmes' third-floor apartment, which authorities found booby-trapped with trip wires apparently attached to some type of incendiary or chemical explosive devices, according to Oates. Oates said investigators were "confident" the suspected shooter acted alone.

Holmes' only known prior contact with police was a traffic stop in Colorado that resulted in a speeding ticket last fall, Oates told reporters.

Holmes graduated with honors from the University of California, Riverside, two years ago with a bachelor's degree in neuroscience and enrolled in graduate school at the University of Colorado in June 2011, officials with the two institutions said.

As of this week, he was "in the process of filling out the paperwork to voluntarily withdraw" from the Ph.D. program, according to a statement from the Colorado campus.

It was not immediately clear if all showings of "The Dark Knight Rises" would continue as scheduled.

STORY: Some of the deadliest mass shootings around world

Former Connecticut Sen. Chris Dodd, chairman and chief executive officer of the Motion Picture Association of America, said members of the agency "share the shock and sadness of everyone in the motion-picture community at the news of this terrible event."

"We extend our prayers and deepest sympathies to the victims, their loved ones and all those affected by this tragedy," Dodd said.