Community comes together to care for evacuated animals from Lilac Fire

At least 25 horses died Thursday when flames from the wind- driven Lilac Fire swept through the San Luis Rey Training Center in Bonsall, where nearly 500 horses are stabled, officials said.

SAN DIEGO (NEWS 8) - Since the Del Mar Fairgrounds opened its gates for uprooted animals and livestock Thursday due to the Lilac Fire, community members have taken to the internet to help secure funding for animal care and reunite families with their pets.

The Del Mar Fairgrounds converted to an evacuation center for large animals on Thursday evening and invited evacuated residents to drop off horses and other livestock on their way to safety. By 5 p.m. Thursday, around 130 animals were brought in for shelter and that number, mostly made up of horses, grew to around 800 as of 8 a.m. Friday.

Officials in Del Mar encouraged livestock owners to bring bedding and feed, and to make sure their animals were properly identified. By early Friday officials were putting out calls for volunteers to drop off those same supplies as stock ran low.

Some horses being housed at the fairgrounds were taken there by their owners, but others were rescued from nearby facilities and even off of the streets after being cut loose. Volunteers and staff have been working to reunite horses with their owners despite some not having chips, tattoos or any discernible identification.

A Facebook page has been set up to help with the cause. Page administrators are posting photos of horses and including any identification information they can.

A number of the nearly 500 horses stabled at the nearby San Luis Del Rey were also brought to the fairgrounds and many remain unaccounted for.

At least 25 horses died Thursday when flames from the wind-driven fire swept through the facility in Bonsall. Officials said the fire quickly engulfed eight barns, and while an unknown number of horses were evacuated, fire authorities eventually declared conditions unsafe for vehicles to enter the area to pick up the remaining horses, according to Mike Marten, the public information officer of the California Horse Racing Board.

"Individuals at (San Luis Rey) risked their lives in efforts to free the horses from their stalls and herd them into the safer infield area and training track," Marten said. "However, it is believed that approximately 25 horses perished in the fire."

The Del Mar Thoroughbred Club, the Stonach Group, Santa Anita Park and countless members of the horse racing community across the country have come together to launch a GoFundMe page to help support the animal care efforts at the Del Mar Fairgrounds.

One trainer, Cliff Sise, told News 8 that one of those dead was his horse, which he tried to rescue from a burning barn.

"It was dark, everything was hot and she wouldn't come out," Sise said. "I opened the pen and tried to get behind her and get her out, and she wouldn't get out. She burned to death that quick."

Britney Eurton, a reporter with the cable horse racing network TVG, tweeted that Del Mar officials were preparing to take in as many San Luis Rey horses as possible.

As of 7:30 p.m. some 30 horses at San Luis Rey were still in the process of being evacuated and an unknown number of horses housed in pastures surrounding the property were unaccounted for as darkness prevented a thorough search of those areas, according to racing officials.

California Horse Racing Board personnel were on the scene Friday to work with the professionals and volunteers at San Luis Rey.

Due to the fire, Los Alamitos Race Course in Cypress announced that it is canceling its Friday afternoon racing program out of respect for the horses and people involved.

You can find several tips for animal care during evacuations here, and more information is available on the organization's website.

Small-pet friendly shelters have been opened at:

Wild Wonders, an animal reserve in Bonsall that cares for more than 100 exotic animal species, including cheetahs and lynxes, was forced to evacuate all of its animals and staff. All of the animals were evacuated safely and no damage was done to the facility's structures. 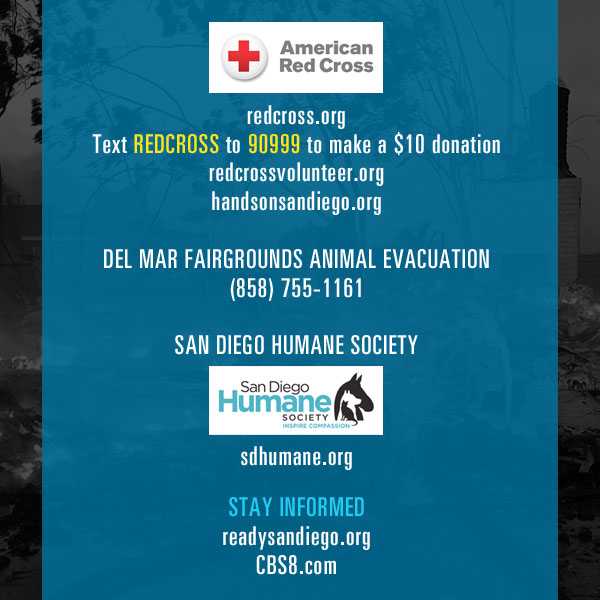