County said it has sent letters to local mayors, urging them to enforce the public health order. 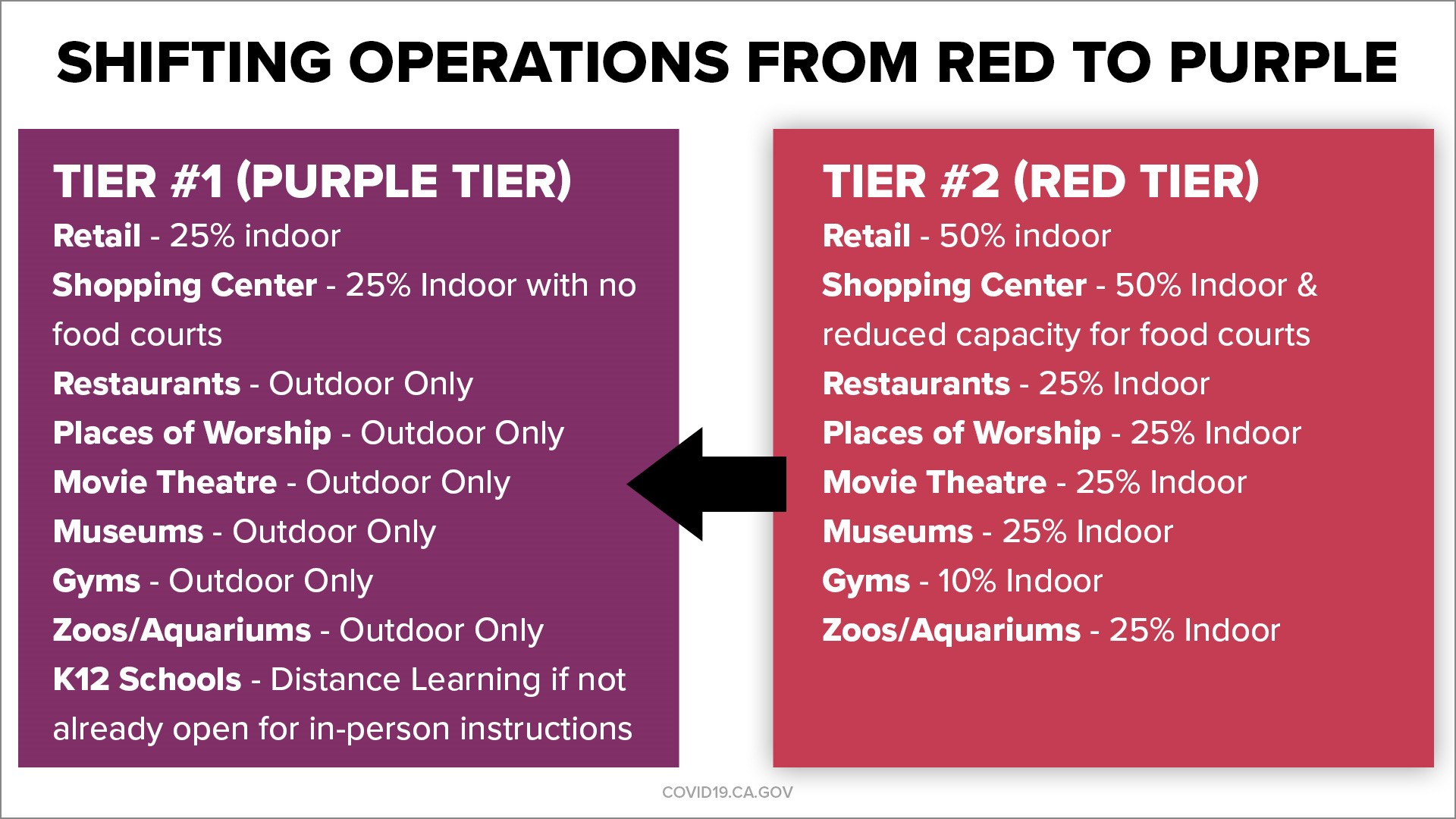 Businesses have until midnight Saturday morning to adhere to the new restrictions.

Restaurants and gyms must move all of their operations outdoors. Movie theaters, places of worship, and museums must do the same.

Retail must cut its capacity from 50 percent to 25 percent.

It's a tough blow to businesses as they move into the holiday season. However, unlike the last time San Diego was under tight restrictions, salons, personal care businesses and playgrounds will be allowed to remain open.

Credit: COVID-19.ca.gov
Changes to operations when shifting from red to purple tiers on CA COVID-19 status

"The virus is not over just because we’re tired of it," said California Health and Human Services Secretary Mark Ghaly. "It doesn’t put its guard down, it looks for opportunities to spread."

According to the county, ten other California counties besides San Diego have moved into more restrictive tiers.

"We all have to come together to re-focus, re-sharpen our efforts," he added.

Tuesday he announced the county has sent letters to local mayors asking them to step up enforcement in their cities.

Fletcher said they're also sending letters to tourism businesses like Airbnb, asking them to comply with the public health order and ban large indoor gatherings.

"I recognize that our place in the purple tier is frustrating to everyone. But remember that we all play a role in our tier assignment. It is not a state assessment that places us in one tier of another, it is the results of our individual actions and behaviors that assign us," said Public Health Officer Wilma Wooten.

The county said it's giving 40,000 masks to law enforcement and asking them to pass them out where needed.

"There are only so many things we can do as a county in terms of putting in place guidelines. There has to be proper enforcement of those in order to slow the spread," said Fletcher.

The county also announced starting Thursday it will begin case rate and testing positivity by municipality and zip codes on its website.

"No one has any desire to issue fines, or penalties or be punitive with what we are doing. We are doing the best in a very difficult situation. We are trying to make the choices that can guide our region through this most responsibly and most safely," said Fletcher.

San Diego will remain in the purple tier for at least the next three weeks. In order to return to the less restrictive red tier, the case rate must remain below 7.1 for two consecutive weeks.