Conn. gunman had hundreds of rounds of ammunition

Connecticut State Police say they are assisting local police in Newtown amid reports of a shooting at an elementary school. 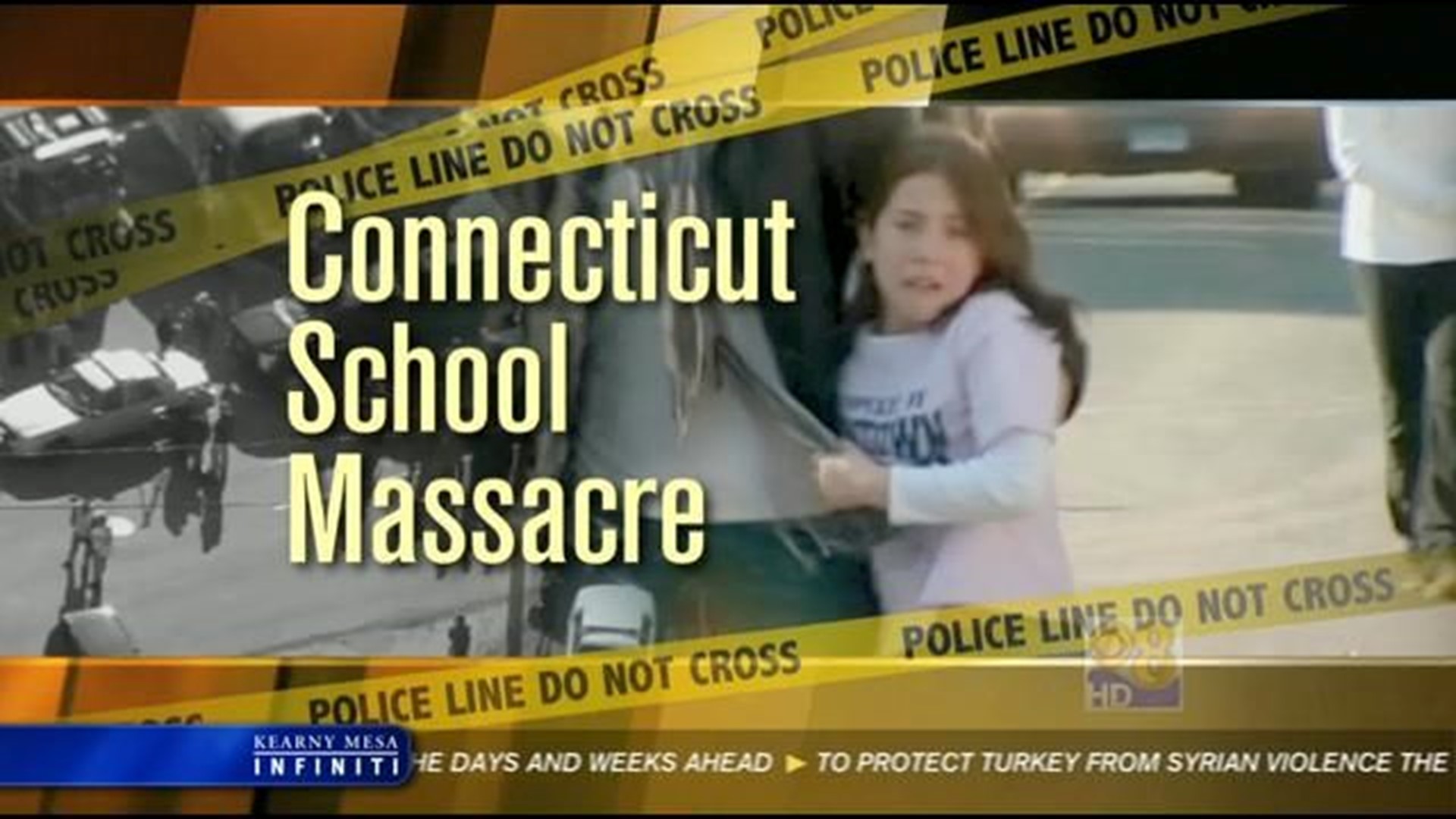 NEWTOWN, Conn. (AP) — The gunman in the Connecticut shooting rampage was carrying an arsenal of hundreds of rounds of especially deadly ammunition — enough to kill just about every student in the school if given enough time, authorities said Sunday, raising the chilling possibility that the bloodbath could have been far worse.

Adam Lanza shot himself in the head just as he heard police drawing near to the classroom where he was slaughtering helpless children, but he had more ammunition at the ready in the form of multiple, high-capacity clips each capable of holding 30 bullets.

The disclosure on Sunday sent shudders throughout this picturesque New England community as grieving families sought to comfort each other during church services devoted to impossible questions like that of a 6-year-old girl who asked her mother: "The little children, are they with the angels?"

With so much grieving left to do, many of Newtown's 27,000 people wondered whether life could ever return to normal. And as the workweek was set to begin, parents weighed whether to send their own children back to school.

Gov. Dannel Malloy said the shooter decided to kill himself when he heard police closing in about 10 minutes into the attack.

"We surmise that it was during the second classroom episode that he heard responders coming and apparently at that decided to take his own life," Malloy said on ABC's "This Week."

Police said they found hundreds of unused bullets at the school, which enrolled about 450 students in kindergarten through fourth grade.

"There was a lot of ammo, a lot of clips," said state police Lt. Paul Vance. "Certainly a lot of lives were potentially saved."

The chief medical examiner has said the ammunition was the type designed to break up inside a victim's body and inflict the maximum amount of damage, tearing apart bone and tissue.

By late afternoon, President Barack Obama arrived to console families and speak at a vigil in memory of the 26 teachers and schoolchildren who were killed in the second-deadliest school shooting in U.S. history.

Newtown officials couldn't say whether Sandy Hook Elementary School would ever reopen. The school district was considering sending surviving students to an empty school in nearby Monroe. But for many parents, it was much too soon to contemplate resuming school-day routines.

"We're just now getting ready to talk to our son about who was killed," said Robert Licata, the father of a boy who was at the school during the shooting but escaped harm. "He's not even there yet."

Jim Agostine, superintendent of schools in nearby Monroe, said plans were being made for students from Sandy Hook to attend classes in his town this week.

The road ahead for Newtown was clouded with grief.

"I feel like we have to get back to normal, but I don't know if there is normal anymore," said Kim Camputo, mother of two children, ages 5 and 10, who attend a different school. "I'll definitely be dropping them off and picking them up myself for a while."

Also Sunday, a Connecticut official said the gunman's mother was found dead in her pajamas in bed, shot four times in the head with a .22-caliber rifle. The killer then went to the school with guns he took from his mother, got inside by breaking a window and began blasting his way through the building.

Federal agents have concluded that Lanza visited an area shooting range, but they do not know whether he actually practiced shooting there.

Ginger Colburn, a spokeswoman for the federal Bureau of Alcohol, Tobacco and Firearms, would not identify the range or say how recently he was there.

Agents also determined that Lanza's mother visited shooting ranges several times, but it's still not clear whether she brought her son to the range or whether he ever fired a weapon there, Colburn said.

Investigators have offered no motive for the shooting, and police have found no letters or diaries that could shed light on it.

Newtown police Lt. George Sinko said he "would find it very difficult" for students to return to the same school where they came so close to death.

But, he added, "We want to keep these kids together. They need to support each other."

Jennifer Waters, who at 6 is the same age as many of the dead but attends another school, came to Mass at Saint Rose of Lima Roman Catholic church with lots of questions.

"The little children — are they with the angels?" she asked her mother.

Joan Waters assured her daughter that they were, then hushed the child as services continued with boxes of tissues placed in each pew and window sill.

At a later Mass at St. Rose of Lima, the priest stopped midway through the service and told worshippers to leave, because someone had phoned in a threat. Police searched the church and the rectory but found nothing dangerous.

An overflow crowd of more than 800 people packed the church where eight children will be buried this week. Lanza and his mother also attended the church. Spokesman Brian Wallace said the diocese has yet to be asked to provide funerals for either.

In his homily, the Rev. Jerald Doyle tried to answer the question of how parishioners could find joy in a holiday season with so much sorrow.

The rifle used was a Bushmaster .223-caliber, a civilian version of the military's M-16 and a model commonly seen at marksmanship competitions. It's similar to the weapon used in the 2002 sniper killings in the Washington, D.C., area and in a recent shopping mall shooting in Oregon.

Versions of the AR-15 were outlawed in the United States under the 1994 assault weapons ban. That law expired in 2004, and Congress, in a nod to the political clout of the gun-rights lobby, did not renew it.

Investigators have said they believe Adam Lanza attended Sandy Hook many years ago, but they couldn't explain why he went there Friday.

Authorities said Lanza had no criminal history, and it was not clear whether he had a job.

A law enforcement official, speaking on condition of anonymity because the person was not authorized to discuss the unfolding investigation, has said Lanza had been diagnosed with Asperger's, a mild form of autism often characterized by social awkwardness.

People with the disorder are often highly intelligent. While they can become frustrated more easily, there is no evidence of a link between Asperger's and violent behavior, experts say.

Associated Press writers John Christoffersen and Michael Melia in Newtown, David Collins in Hartford and Brian Skoloff in Phoenix contributed to this report.