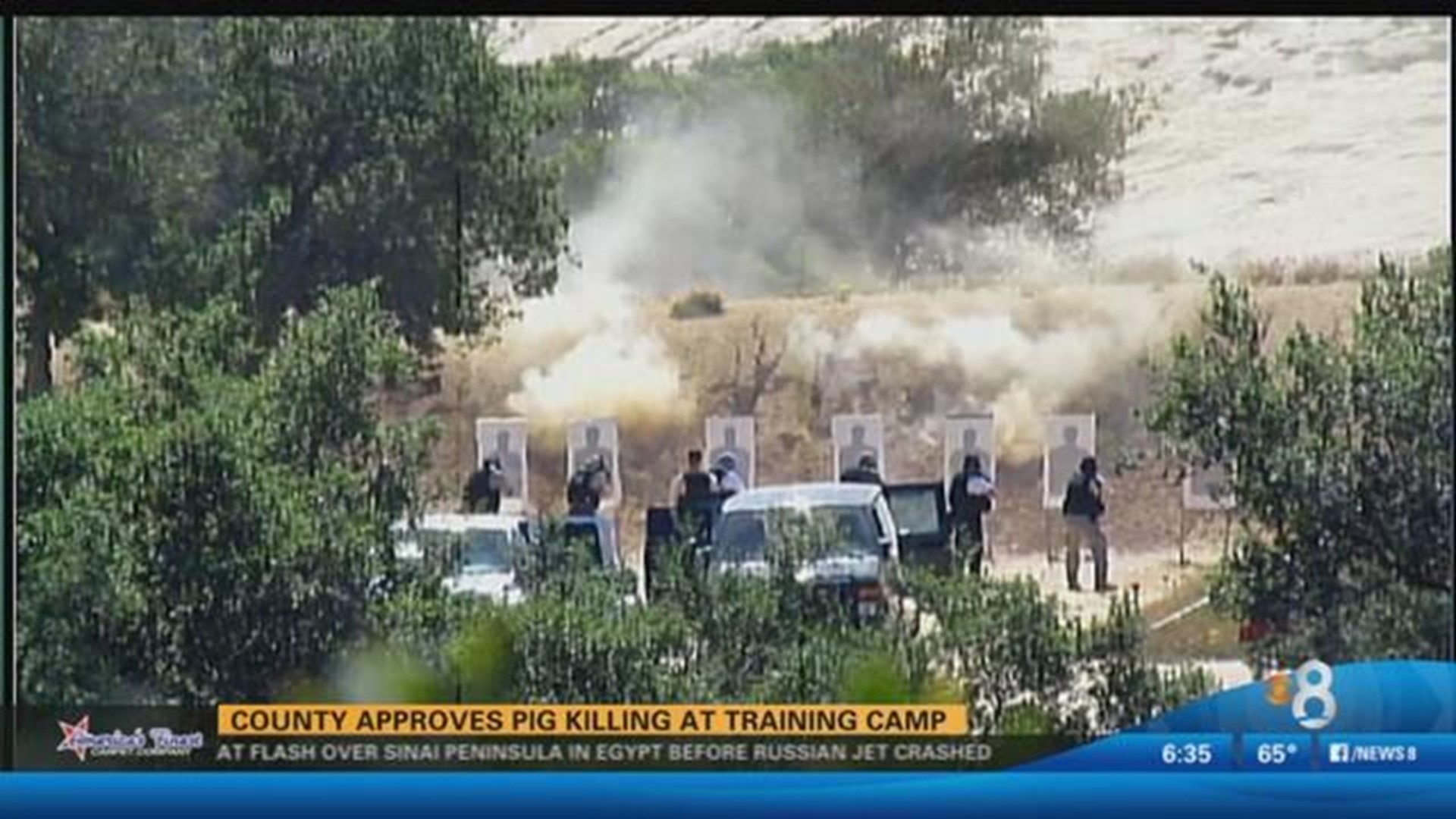 In 2012, CBS News 8 recorded video of pigs being injured and killed at Covert Canyon off Japatul Road in the East County.

It was the latest in a string of controversial military exercises at the site dating back to 2007, including machine gun fire, helicopters landing and sniper training.

The property owner, Kearny Mesa gun shop owner Marc Halcon, had not obtained required permits at the site. He declined to be interviewed for this report.

Since 2007, Halcon has been trying to obtain a major use permit from the county to allow commercial law enforcement and military training at Covert Canyon.

Now, the county has approved live-tissue pig killing and firearms training on an interim basis without a public hearing.

"They’ve taken eight years of efforts by the environmental community and by neighbors to force this entity to comply with the law; and the county has now – through some crazy backroom dealing – come forward and said it's all over. It's all good," said environmental attorney Marco Gonzalez.

Gonzalez represents the non-profit group, Save Our Forest and Ranchlands, which is seeking to appeal the county's stipulated enforcement administrative order.

"I don't care whether it's Blackwater, the Navy, Homeland Security, or sheriff, you still need the commercial activity permits that are required by law," said Gonzalez.

The attorney also represents neighbors who purchased property decades ago, before Covert Canyon moved in and started operating.

By ordinance, any group or individual can appeal the Covert Canyon decision to the planning commission, but Gonzalez says the county wants to charge his clients $1,600 to force a public hearing.

Any appeal must be submitted by November 6.

The county’s Land Use and Environmental Group communications officer, Alex Bell, also responded to the following questions emailed to the county on Tuesday by CBS News 8:

When was the last time there was a public hearing on Covert Canyon?
May 28, 2010 Planning Commission Hearing

Is it true that if somebody wants to appeal this stipulation they have to pay $1,600 to force a public hearing before the Planning Commission?
A form and fee are required to file an appeal. The appeal process for an Director’s Administrative Decision is outlined in the San Diego County Zoning Ordinance (SDCZO) Sections 7200-7249. Specifically, SDCZO 7201(d)  provides for a fee to accompany an appeal pursuant to the fee schedule authorized by SDCZO section 7602. $1670 is the flat fee required for a non-applicant to submit an appeal.

What led the county to enter into this interim stipulation?
In mid-2015, Covert Canyon, LLC (applicant) approached County staff with a modified and significantly reduced scale and scope of their proposed project.

The original proposal from 2007 included the construction of an urban warfare training house, helipad, simulated ship training structure, and 45 feet repelling and training tower for training open to the general public. The current interim use involves no new structures, is for training government military and law enforcement participants only with limited class offerings, ordnance, and hours of operation.

At the applicant’s request, the County of San Diego’s Department of Planning & Development Services (PDS) conducted a careful review of the revised proposed project, and previous land use and permitting determinations. The Director determined that a modified project, limited in scale and scope for government military and law enforcement firearms training, is classified as Law Enforcement Services as defined in SDCZO section 1346, and the applicant could pursue permits accordingly. The interim use is only allowed while the applicant pursues the Site Plan permit or Major Use Permit for  possible permanent use and complies with the outlined performance measures in the Stipulated Administrative Enforcement Order (SAEO).

Why not just wait for the MUP to go forward?
The applicant decided to modify their project, and see the answer to question 3 above.

What happens to the terms of this stipulation if Covert Canyon abandons its efforts to get a MUP?
If the required permitting described in the SAEO is abandoned, the SAEO is void and the County may pursue any of its various remedies as outlined in the SDCZO or SDCCRO.

Was there pending litigation that led to this stipulation?
No