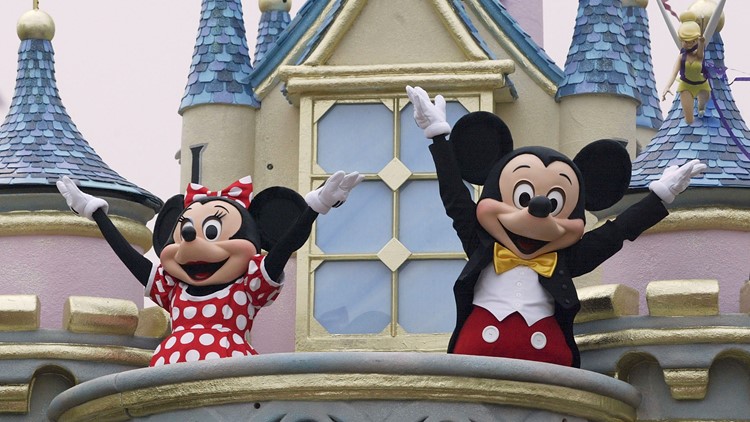 Photo by: MN Chan
Disney characters Mickey Mouse and Minnie Mouse perform during the parade at Hong Kong Disneyland on September 11, 2005 in Hong Kong. The new theme park is scheduled to have its grand opening September 12. (Photo by MN Chan/Getty Images)

ANAHEIM, Calif. — Criminal charges were filed on Tuesday against a Las Vegas man and his sister and brother-in-law in connection with a brawl at Disneyland that was captured on video that went viral.

Avery Desmond-Edwinn Robinson, 35, along with his sibling, Andrea Nicole Robinson, 40, and her husband Daman Petrie, 44, both of Compton, are scheduled to be arraigned on Tuesday at the North Justice Center in Fullerton on various counts stemming from the fight and an off-camera incident with security guards, according to Kimberly Edds, a spokeswoman for the Orange County District Attorney's Office.

Avery Robinson is charged with one felony count each of domestic battery with corporal injury, assault with force likely to produce great bodily injury on his girlfriend and assault with a deadly weapon and two counts of criminal threats, along with five counts of battery and four counts of child abuse and endangerment, all misdemeanors.

He faces seven years and four months in prison if convicted as charged.

Petrie is charged with one count of battery on Avery Robinson's girlfriend, who was punched in the face during the scrum, and faces up to six months in jail if convicted, Edds said.

It's unclear what touched off the fight, which broke out on July 5 in Toontown and sprawled out onto the Main Street in the famous theme park, but several Disneyland visitors tried to stop it, Edds said. One theme park guest put Avery Robinson in a chokehold, she said, and one of the children with the family was carried away from the brawl.

When security guards asked the family to leave, there was more violence, Edds alleged. Avery Robinson is accused of attempting to hit a security guard with his vehicle as he drove away and allegedly threatened to kill his sister and Petrie as he simulated having a gun in his hand, Edds said.