Paul Flores, long described as a "prime suspect" by authorities, was taken into custody by San Luis Obispo County sheriff's officials on Tuesday. 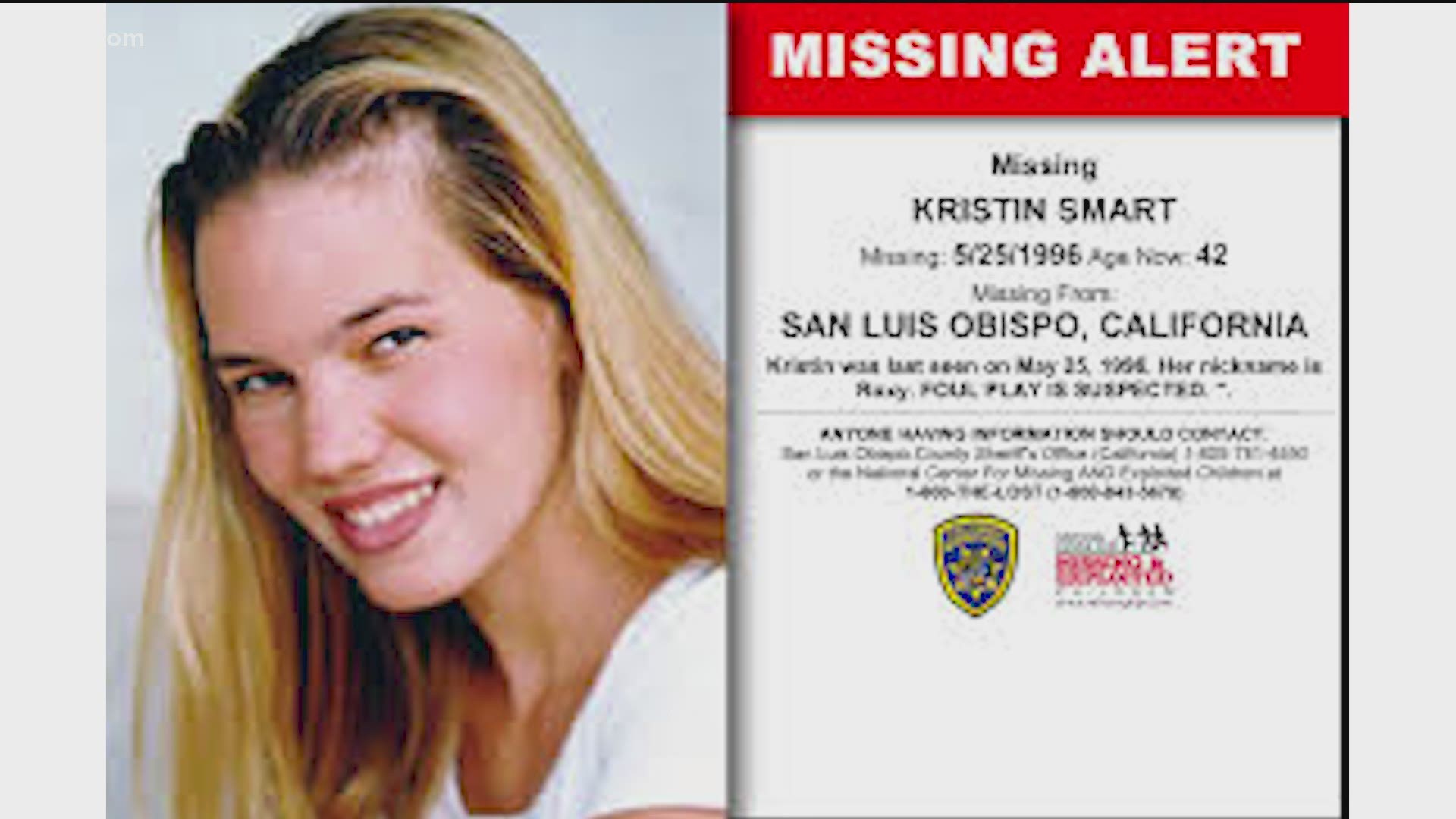 SAN LUIS OBISPO, Calif — A San Pedro resident, a longtime person of interest in the 1996 disappearance of his former Cal Poly San Luis Obispo classmate Kristin Smart, was arrested Tuesday at his home on suspicion of murder, and his father was booked on suspicion of being an accessory.

Paul Flores, long described as a "prime suspect" by authorities, was taken into custody early this morning by San Luis Obispo County sheriff's officials and driven to San Luis Obispo, where the 44-year-old suspect was booked shortly after noon.

John Segale, a Smart family spokesperson, told CNN that the family was notified by law enforcement officials that Flores and his father were arrested Tuesday morning.

Ruben Flores, 80, of Arroyo Grande, was booked on suspicion of being an accessory, with bail set at $250,000, San Luis Obispo jail records show. No booking information was listed for his son as of mid-morning.

During a 2 p.m. news conference, San Luis Obispo County Sheriff Ian Parkinson said new evidence led to the arrests, though he did not specify what that evidence is due to search warrants being sealed.

He revealed Smart's remains have not been found.

Parkinson said investigators had served search warrants at Flores' home and simultaneously at the residences of his mother, father and sister, in February 2020, telling reporters Tuesday afternoon that "physical evidence recovered during these searches led to the service of (an) additional search warrant at Paul Flores' residence in April last year."

A San Luis Obispo County judge subsequently signed arrest warrants for Paul Flores and his father, along with two additional search warrants, the sheriff said during a news conference at Cal Poly Pomona, where Smart and Flores were each 19-year-old freshmen students at the time of her disappearance.

Flores was booked on suspicion of murder and was being held without bail, while his father's bail was set at $250,000. The two were arrested simultaneously about 7:30 a.m., and investigators are still in the process of executing the latest search warrants, the sheriff said.

Flores, who was questioned about Smart's disappearance at the time, has lived for more than a decade in San Pedro, where authorities served a search warrant at his Upland Avenue home last April in a quest "for specific items of evidence" related to the investigation into Smart's disappearance, San Luis Obispo County Sheriff's Department spokesman said then.

In February 2020, search warrants were served in San Pedro, San Luis Obispo County and Washington state, but authorities declined to provide specifics about the nature of the searches.

In 2016, federal investigators dug up a hillside near the Cal Poly San Luis Obispo campus, looking for remains. They also searched the yard of a home.

Smart's family has sued Flores in civil court. He invoked his 5th Amendment right against self-incrimination before a grand jury and in a civil deposition.

Regarding Tuesday's arrests, Sheriff Parkinson said, "It is my hope this is the first step toward justice for the Smart family, peace for the community, some justice out there...for all of us, and most importantly peace for Kristin."

In a statement released after the arrests, the Smart family said, "For over 24 years, we have waited for this bittersweet day. It is impossible to put into words what this day means for our family. We pray it is the first step to bringing our daughter home. While Kristin's loving spirit will always live in our hearts, our life without her hugs, laughs and smiles is a heartache that never abates.

"The knowledge that a father and son, despite our desperate pleas for help, could have withheld this horrible secret for nearly 25 years, denying us the chance to lay our daughter to rest, is an unrelenting and unforgiving pain," their statement says. "We now put our faith in the justice system and move forward, comforted in the knowledge that Kristin has been held in the hearts of so many and that she has not been forgotten ... We are pleased that Kristin's case has now moved to the district attorney's office, where we know we will be in good hands, and look forward to the day when there will be justice for Kristin."