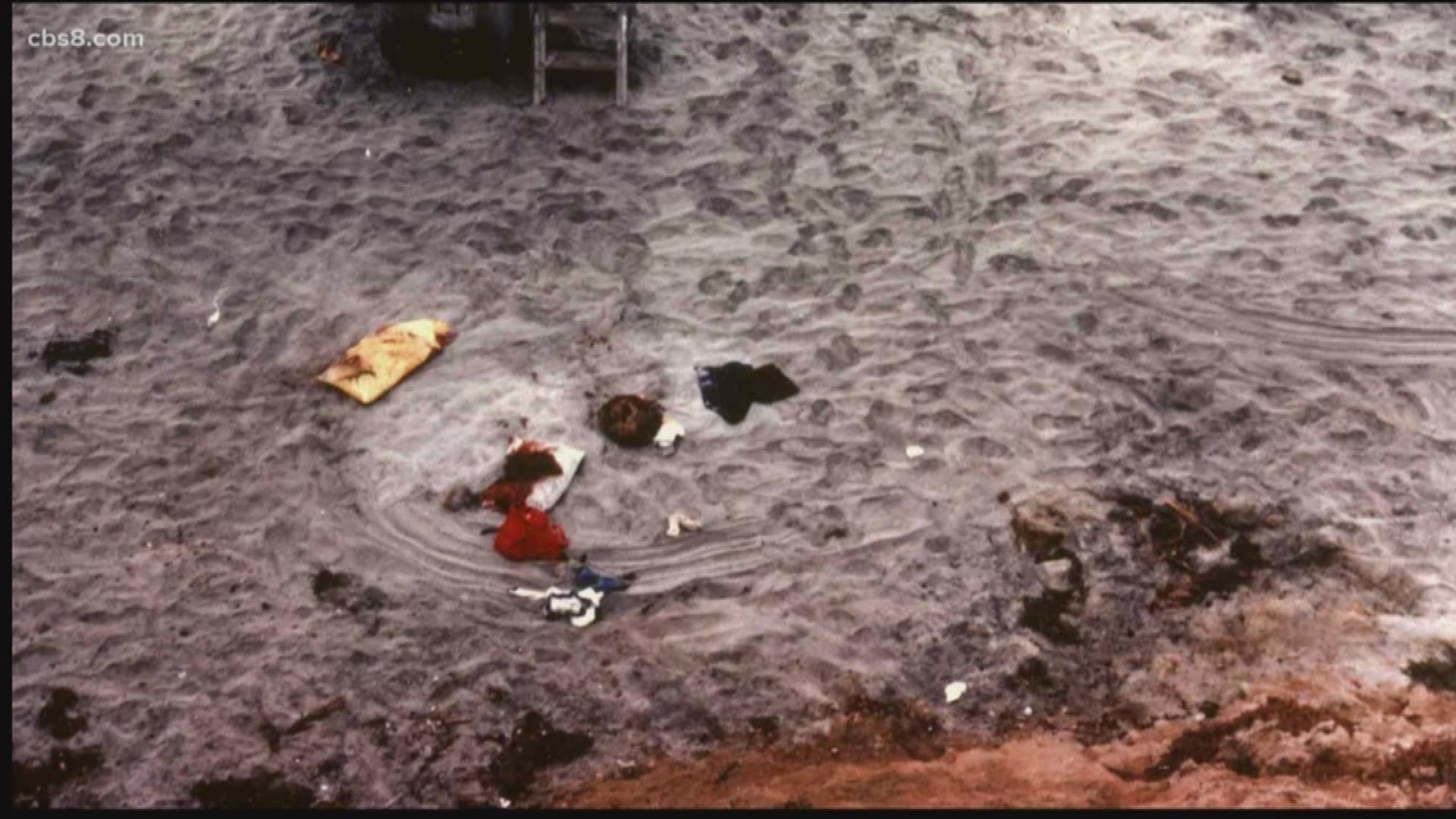 SAN DIEGO — DNA evidence and an FBI report are shedding light on the unsolved murder of a teenage girl at Torrey Pines State Beach in 1978.

More than four decades after Barbara Nantais was beaten and strangled to death on the sand, the records reveal other murders with similar characteristics, as well as the results of DNA testing in the case.

It's a short walk to North Torrey Pines beach from the parking lot, along the train tracks and under the bridge to lifeguard tower 7.

“We stood there and looked at all the fires on the beach.  We thought we're going to have fun.  This is cool.  We're going to camp out until we have to leave,” said Alt, who recently returned to the Torrey Pines site.

The two teenagers zipped their sleeping bags together and fell asleep in each other's arms on the beach.

Nantais’ murder remains unsolved. She was beaten, sexually assaulted and strangled to death on the beach. The killer, or killers, knocked Alt unconscious.

“What they used to bash my head in was a rock and a log out of the fire pit,” said Alt.

Alt has no memory of the attack.  He still has a metal plate in the front of his head.

Nantais was found naked, her right nipple nearly sliced off with a sharp object, her mouth stuffed with sand. The killer dragged the teen's body across the sand to to an area north of the lifeguard tower and positioned her, spread eagle on the beach.

Over the decades, police ordered several rounds of DNA testing on evidence from the crime scene, according to San Diego Police crime lab reports obtained by News 8.

Lab technicians tested three sleeping bags, three rocks used in the attack, a cigarette but found at the location of the body, a necklace Nantais was wearing around her neck, fingernail scrapings, and swabs taken from the teenage victim’s body.

On the sleeping bags, police found Alt's DNA and the DNA from another couple, who police believe had previously used one of the sleeping bags.  That couple slept inside a vehicle at the Torrey Pines parking lot on the night of the murder.

The SDPD crime lab also found DNA mixtures on several items of evidence at such low levels it was unidentifiable, according to the reports.

The most recent SDPD crime lab reports obtained by News 8 were from 2013.

Testing in 2012 found Alt's DNA on the three rocks, as well as unidentifiable low-level DNA mixtures.

Also in 2012, testing confirmed DNA from an unknown male found on the cigarette butt found at the crime scene.  The report said, “This DNA profile will periodically be searched against the CODIS database.”

Despite all this testing, no suspect has been identified.

In 2014, detectives turned to the FBI to try and solve Barbara's murder.

Agents in the Violent Criminal Apprehension Program (ViCAP) wrote a crime analysis report, which identified murders in Southern California with similar characteristics to the Nantais case.

The report showed two local cases in 1985 where the victims had sand or gravel stuffed into their mouths:  The murder of Donna Gentile, age 22, and the murder of Marsha Funderburk, age 25. The bodies of both women were discovered in the East County and both cases remain unsolved.

In Long Beach, a Jane Doe found murdered in 1974 also had similar characteristics.  Her body, like Barbara’s, had been dragged across the sand.

A Long Beach man named Gary Stamp reportedly confessed to the Jane Doe murder but the victim remains unidentified.  Stamp, 61, died of cancer while in custody before he could be brought to trial.

“That analysis was just one of many that have been done over the years in an attempt to identify similar cases for evaluation as being possibly related to determine if evidence in one case could help solve another. The ViCAP report provides investigative leads, all of which having been investigated. Although there are some similarities on the surface, we have found no compelling evidence that any of those cases were related.”

The FBI report also provides timelines detailing the whereabouts over the years of two deceased men, that detectives once considered possible suspects in the Nantais murder.

Convicted rapist Ronald Tatro was in prison on the date of the Nantais murder, August 13, 1978, according to the ViCAP report.  Kevin Brown – a SDPD crime lab employee accused in the 1984 murder of Claire Hough, 14, on Torrey Pines beach – was in college in Sacramento in 1978.

SDPD's identification of Brown as a suspect in Claire Hough's murder is the subject of a federal lawsuit brought by Brown's widow, currently set for jury trial in San Diego next month.

Still, there may be hope for solving the Nantais murder.

“I think in order to solve this case you are going to have to have some DNA link, some physical evidence linking the perpetrator to this crime,” Ryan said.

“I do believe that there are some open avenues in this case for additional testing,” Ryan said.

A new computer program could hold the key. The software, called TrueAllele, made by Pittsburgh firm Cybergenetics can re-analyze old DNA test results.

DNA mixtures, formerly unidentifiable, can now be separated out.

“If there were mixtures that were obtained from various items of evidence – that perhaps the analyst at the crime lab was unable to interpret at the time – I would suggest that they go back and look at that data and see if it might be useful; see if it can be sent to Cybergenetics for reanalysis,” Ryan said.

With today’s DNA technology, numerous hairs found at the crime scene can now be analyzed.

“There's a new technique for testing hairs that you don't even have to have a root present,” said Ryan, who runs a DNA firm in Carlsbad called Ryan Forensic.

Meanwhile, Jim Alt is still waiting for a break in the case. And, he'll never forget his last memories of Barbara.

“Just her laying in my arm.  Us talking.  Looking at the stars,” he recalled.

Every year, on the anniversary of the murder, Alt and Nantais family members meet with San Diego police detectives for an update on the case.  This year's meeting in August will mark 42 years since Barbara's passing.

In a statement to News 8, SDPD Lt. Dobbs said it’s important to the department to bring closure to the victims and their families:

“This is still an open case, which is frequently reviewed. We constantly monitor emerging forensic sciences against the evidence in unsolved cases to evaluate the viability of the new processes in solving cases. The San Diego Police Laboratory is on the cutting edge of much of the emerging technology. When technology emerges that our Laboratory is not equipped to perform, we can – and have – sent evidence to outside laboratories. We are committed to solving all of our cases and will take any reasonable steps towards doing so."