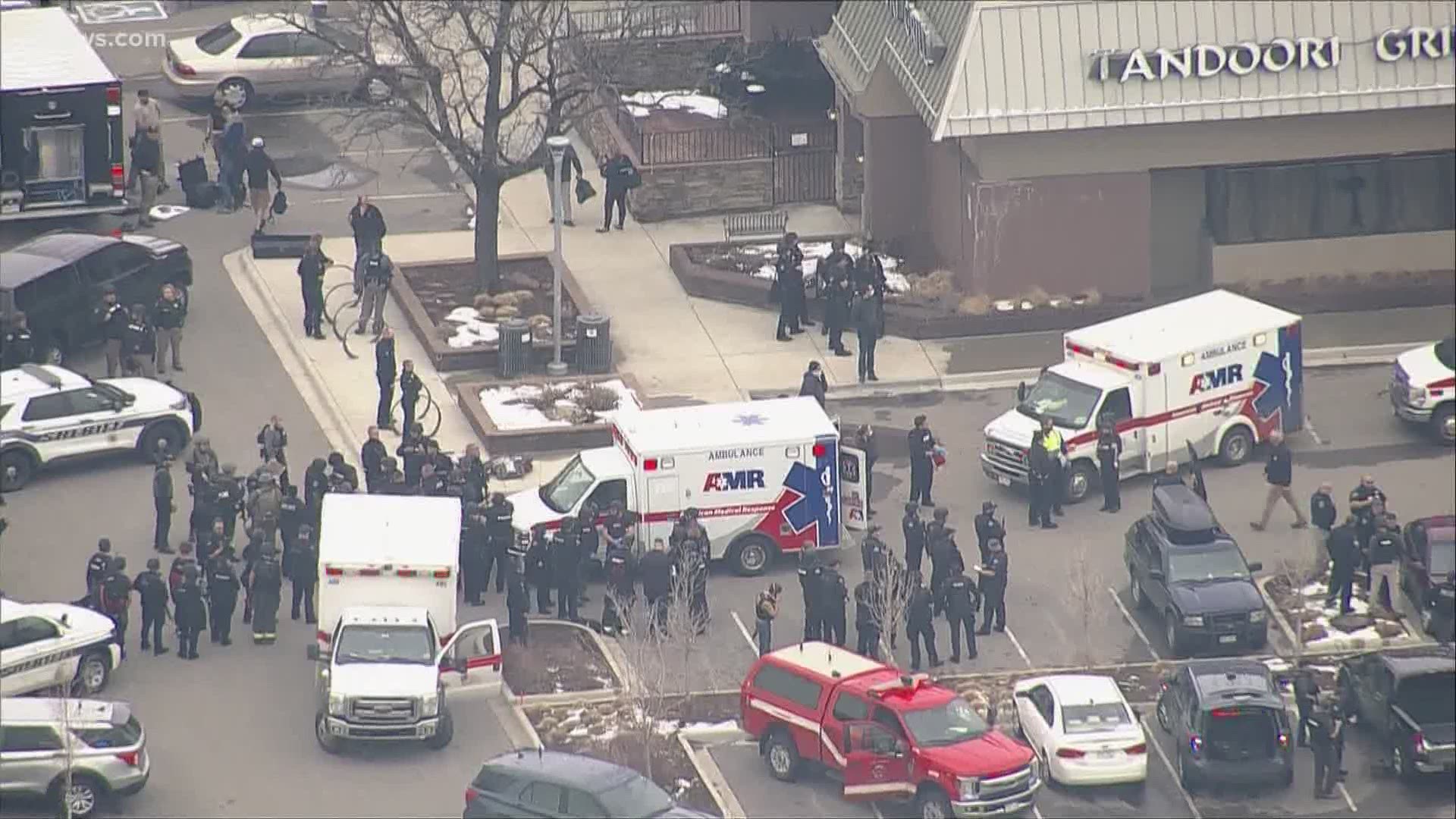 BOULDER, Colo. — Colorado leaders, sports organizations and others were quick to take to Twitter to condemn the violence in wake of an active shooter situation at a grocery store in Boulder.

The shooting happened Tuesday afternoon at the King Soopers near Table Mesa Drive and South Broadway, which is in a busy shopping center around 2 miles from the University of Colorado Boulder campus.

Police confirmed that one Boulder officer was killed as well as nine other people. The officer was identified as 51-year-old Eric Talley, who had been with the Boulder Police Department (BPD) since 2010.

A suspect is in custody, and police no longer believe there is a threat to the public.

President Joe Biden was briefed on the situation on Monday, and addressed the nation on Tuesday.

Here are some of the Colorado leaders who reacted to the shooting:

Polis also said the state would provide any resources necessary.

“It's absolutely baffling, it's 10 people going about there day living their lives, not bothering anybody. A police officer who is performing his duties, and with great courage and heroism,” Harris in a statement.

The mayor of Boulder said Biden contacted him on Tuesday to express his condolences and support.

I just received a call from @POTUS extending his condolences and support to the Boulder community as we begin our healing. The President was clearly pained by our losses, and offered any resources we need. I thanked him sincerely on behalf of everyone in Boulder. @bouldercolorado

They were just grocery shopping.

I can't imagine what the families of these Coloradans are experiencing. My heart goes out to them.

We don't know all the details yet, but we DO know our country has a horrific problem with gun violence. We need federal action. Now. https://t.co/FzgEolgcD3

My heart goes out to the families of the Coloradans, including a Boulder police officer, whose lives were tragically taken by a senseless act of gun violence. I am deeply grateful for the swift response from law enforcement and first responders.

Boebert said "random public shootings and senseless acts of violence are never ok" in a statement on Twitter.

My prayers are with the shoppers, employees, first responders & others affected by the shooting in Boulder.

May God be with them.

While we are still awaiting important information and details in this case, random public shootings & senseless acts of violence are never ok.

The congressman representing Boulder said he is praying for the first responders and law enforcement responding to the "terrible incident."

Praying for the entire #Boulder community & all of the first responders and law enforcement responding to this terrible incident. https://t.co/yV3R6laTyX

Buck also said he was praying for law enforcement and asked the public to avoid the area.

Praying for our law enforcement who are responding to the active shooter at the King Soopers in #Boulder. Please follow the advice of @boulderpolice and avoid the area. https://t.co/GWZV2111ZF

Degette tweeted that more must be done to protect communities from gun violence.

Our hearts go out to everyone in the Boulder area.

We have to do more to protect our communities from the constant threat of gun violence.

We have to find a way to come together and collectively declare: Enough is enough!

Denver's archbishop said he is praying for the victims and first responders.

Please join me in praying for the victims of the shooting at King Soopers in #Boulder and all the first responders working to resolve the situation. +sja

Aquila also released a statement on the shooting:

“I am deeply saddened by the tragic and sudden deaths of 10 people yesterday afternoon in the shooting at a King Soopers in Boulder. I have been praying for all those impacted by this senseless act of violence and want to express my spiritual closeness to them.

Along with the rest of the community, we are waiting for more details on those who have passed away. We do know that Officer Eric Talley was Catholic, and has been described as a man of character and strong faith, a loving father to seven children, a husband who cared deeply for his family, and a soldier for Christ. My prayers and those of the faithful of the Archdiocese of Denver are with the Talley Family and all who have died.

We also know that Officer Talley regularly stopped by St. Martin de Porres in Boulder and participated in its events, even though he wasn’t a parishioner there.  For those unfamiliar with the area where the shooting occurred, St. Martin de Porres is just across the street from King Soopers. St. Martin de Porres, the patron of the parish, was someone who experienced tragedy and hardship in his life, and so, we ask for his intercession in these difficult circumstances, that God would bring good out of this great evil.

While we still do not know what led up to this terrible event, incidents like this have become far too common in our country and our state. We must work to promote deeper conversion of hearts so that our lives are characterized by the virtue of charity, which allows us to love God and our neighbor, strengthening the fabric of society and preventing senseless acts of violence such as this one.”

Sullivan, whose son was one of the 12 people killed in the Aurora theater shooting, said we "must do more" about violence.

Simply don’t have the words and doing all I can to maintain the strength I will need to get through this day. We don’t have to live like this. We must do more! #copolitics #coleg https://t.co/ewwsvxI9Jw

I am devastated to learn of yet another incident of gun violence in our community. As a two-time graduate of CU Boulder, the city holds a special place for me, my family and our state. My heart breaks for those impacted by today’s violence.

Crow said he again has to explain another mass shooting to his children, and that "we don't need to live like this."

The community will always have my thoughts & prayers. But I’m a lawmaker, & it's my job to help make laws & policies that will stop this crisis.

That’s what my community deserves. We need gun safety laws to help end this madness.

Weiser said his office was prepared to assist in any way possible.

"I'm deeply saddened and angered with the news of another tragic shooting in Colorado." pic.twitter.com/NXEECHYfb6

John Tayer, president and CEO of the Boulder Chamber, released the following statement:

"It has been a whirlwind of shock, sorrow and intense activity since word of an “active shooter” first appeared in text messages yesterday afternoon. As I am sure all of you can relate, when there are moments of community stress, it’s an honor to serve in the role at our chambers where we can offer support for businesses, their employees, and local residents. Now is such a time here in Boulder. That said, it is difficult to work amidst bouts of grief, so I want you to know how much I appreciate the thoughtful messages of support and condolences from my fellow chamber directors. Though I can’t respond to all of them at this time, please know how thankful I am for the strength your thoughts and words of encouragement give to me and our Boulder Chamber team."

Our hearts go out to the innocent victims, grocery store associates & families of those affected by today's shooting at a King Soopers in Boulder, Colo. We are grateful for the law enforcement & medical professionals who bravely responded to yet another senseless tragedy. https://t.co/WS8vNkfFAP

We are all deeply saddened by the events in Boulder today. Our thoughts and prayers are with all those impacted by this terrible act.

In light of the events in Boulder this evening, we will be limiting our activity on Avalanche social platforms this evening.

We are deeply saddened by the events in Boulder today.

Our thoughts are with those impacted by this terrible act.

We are all deeply saddened by the events in Boulder today. Our thoughts are with all those impacted by this terrible act.

Chancellor DiStefano: "Our hearts go out to those who lost their lives, their families and the many others directly impacted by this devastating act of violence in our own backyard."
Read more https://t.co/y3nAjep243