Jose Cruz Noguez, 47, of Mexicali, Mexico, was arrested Monday night as he crossed into the United States, according to the U.S. Attorney's Office. 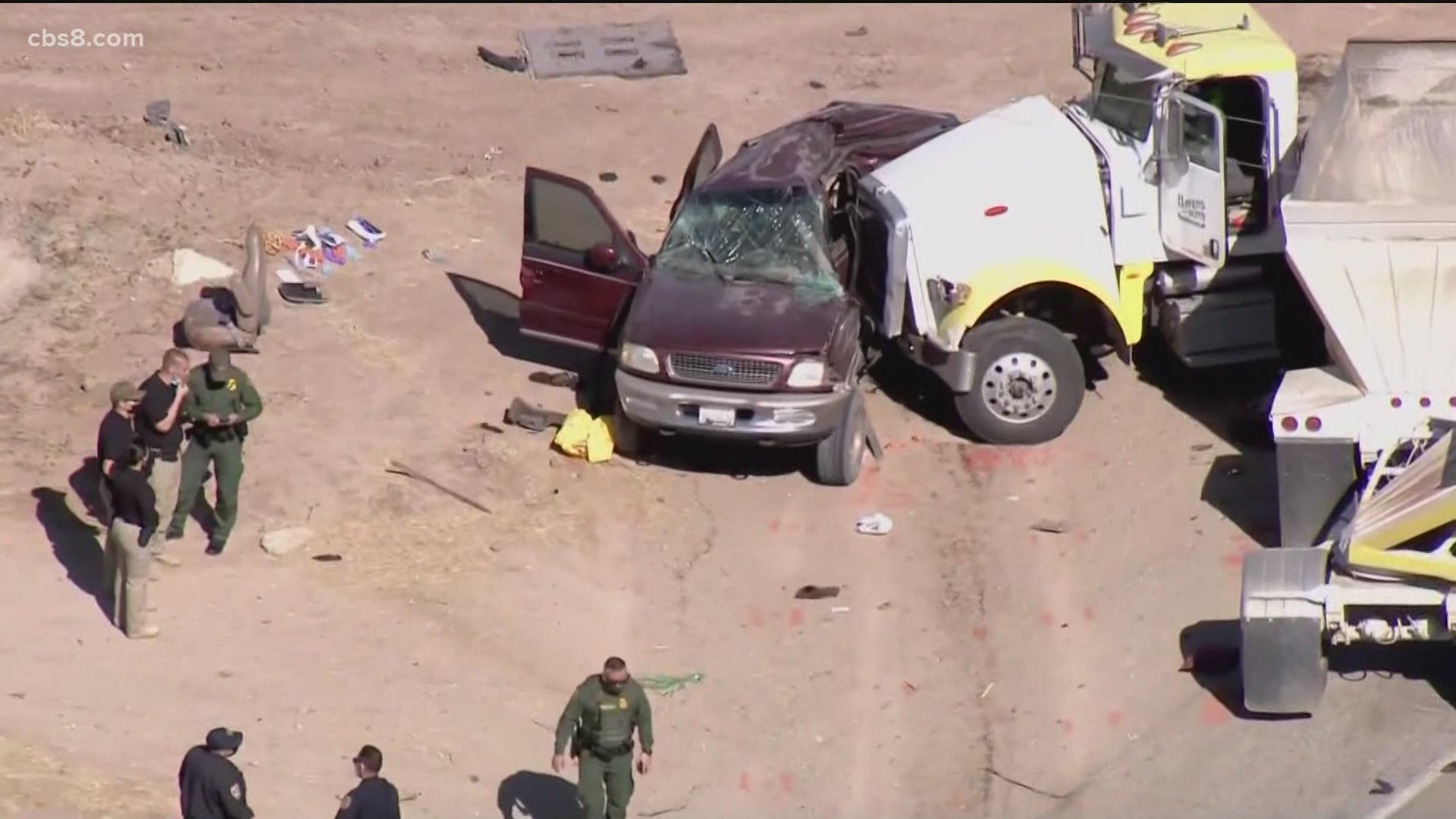 CALEXICO, Calif. — A man who allegedly coordinated a human smuggling operation that led to a deadly Imperial County traffic crash that killed 13 people and injured several others made his initial court appearance Tuesday on federal charges, according to prosecutors in San Diego.

Jose Cruz Noguez, 47, of Mexicali, Mexico, was arrested Monday night as he crossed into the United States at the Calexico Port of Entry, according to the U.S. Attorney's Office. He appeared Tuesday before a federal judge in El Centro on charges of conspiracy to bring aliens to the United States outside a port of entry causing serious bodily injury/placing a life in jeopardy and bringing in aliens without presentation for financial gain.

The March 2 crash near Holtville killed 13 Mexican and Guatemalan nationals when an SUV carrying the victims crashed into a tractor trailer at the intersection of Norrish Road and state Route 115.

The U.S. Attorney's Office said that following a review of border surveillance camera footage, it appears two SUVs drove through a cut-open portion of border fence sometime prior to the crash.

One of the SUVs broke down on Interstate 8 near Holtville and 19 undocumented immigrants were arrested there by U.S. Border Patrol agents, according to the U.S. Attorney's Office. The other SUV was involved in the fatal wreck, with a dozen victims dying at the crash scene and another who died at a hospital. Several others were airlifted to hospitals with "significant injuries," the U.S. Attorney's Office said.

In total, 25 people were inside the SUV at the time of the crash, as a subsequent inspection showed that all but the driver and front passenger seats had been removed to accommodate the extra occupancy, prosecutors said.

Six of the survivors were transported to San Diego trauma centers. Assistant U.S. Attorney Timothy Coughlin says some are still hospitalized and humanitarian parole was granted so their family could be with them during this time.

Cruz was allegedly identified by another suspected smuggler who was arrested at the Campo Border Patrol Station for an unrelated smuggling event on March 15, the U.S. Attorney's Office said. That person told investigators that Cruz offered him $1,000 per passenger to be the driver of the vehicle that was ultimately involved in the crash, but he declined, according to the U.S. Attorney's Office.

Prosecutors said that person later took part in a secretly recorded conversation with Cruz, in which the defendant admitted that his associates cut the border fence and that he received money for the March 2 smuggling event.

"These smuggling networks seek maximum profit by moving as many people as possible across the border with zero regard for their safety and well-being," said Acting U.S. Attorney Randy Grossman. "Cramming dozens of people into eight-passenger vehicles and driving recklessly to avoid detection shows an utter disregard for human life. We will find and prosecute smugglers who use these methods and cause such tragic and avoidable deaths."

"That causes people to make drastic decisions about how they want to enter the United States, including those that were there risking their lives," said Rios.

The Federation of American Immigration Reform, a non-profit that wants to stop illegal immigration says stricter policies need to be in place.

"The only way to prevent this massive abuse and to prevent the criminal cartels from doing what they're doing is to have an orderly process, demand that people who have political asylum cases file those cases outside the United States," said Ira Mehlman, FAIR Media Director.

The judge ordered Cruz remain in custody. A detention hearing is scheduled for April 5. A preliminary hearing is set for April 13 and arraignment on April 27.

WATCH: After deadly Imperial County crash, what about the hole in the border fence?