Denzel Draughn, 28, was among a group of demonstrators who gathered for an Aug. 28 protest that turned heated, during which he allegedly sprayed 11 officers. 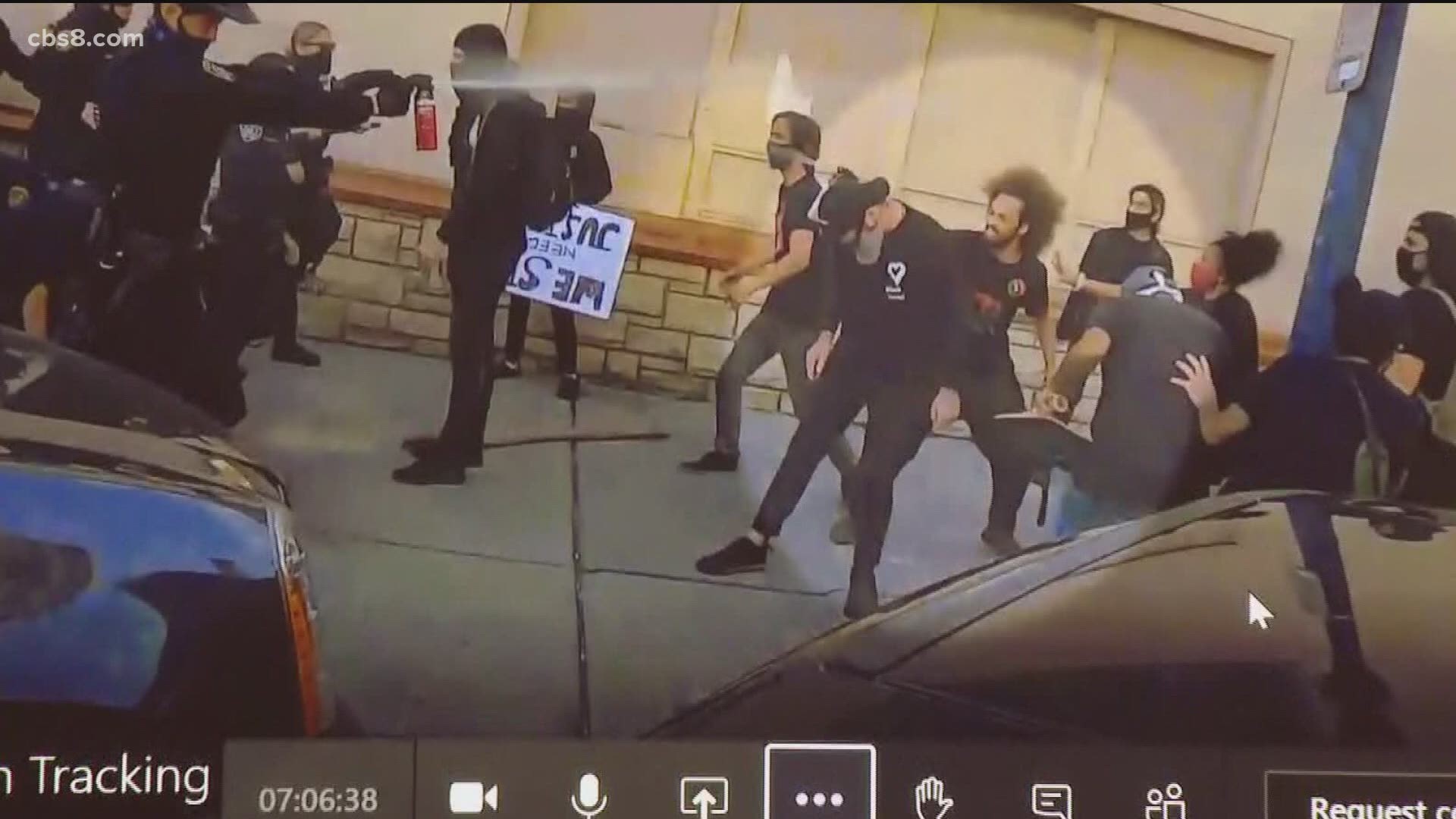 SAN DIEGO — A man accused of pepper-spraying a group of San Diego police officers during a downtown protest pleaded not guilty Wednesday to more than a dozen felony charges.

Denzel Draughn, 28, was among a group of demonstrators who gathered for an Aug. 28 nighttime protest that turned heated, during which he allegedly sprayed 11 officers.

Draughn's supporters, including his family and local activists, have decried his arrest and demanded his release, saying he was protesting the unjust actions of police. They also objected to his $750,000 bail, which was reduced Wednesday to $150,000 by San Diego Superior Court Judge Francis Devaney.

Draughn, who is charged with using tear gas on a peace officer and resisting arrest, could face up to 11 years in county jail if convicted of all counts, according to the San Diego County District Attorney's Office.

On the night of the demonstration, police stopped a motorist who was running red lights, then were confronted by the group of protesters near the intersection of Ninth Avenue and E Street, according to Deputy District Attorney Clayton Biddle.

The prosecutor alleged that during the confrontation, one person grabbed an officer's bike, prompting him to bring out his pepper spray and tell the crowd to step back. Biddle said one man struck that officer in the hand in an unsuccessful attempt to knock the pepper spray can away, then was sprayed. Officers then tried to arrest that man for assaulting the officer, he said.

During the melee, the prosecutor said a pepper spray can fell out of an officer's holster and tumbled along the street. Draughn retrieved it, then sprayed the group of officers on two separate occasions, Biddle alleged.

One officer was briefly blinded by the spray, while the other officers sustained burns and other injuries, the prosecutor said.

Draughn was arrested at about 11:30 that night, he said.

In arguing that Draughn's bail be kept at $750,000, Biddle alleged the defendant had previously tussled with police, resisted arrest and failed to appear in court for criminal cases in Ohio.

"This is not a peaceful protester. Far from it," the prosecutor told the judge.

Biddle said that prior to Wednesday's arraignment, Draughn's bail was twice raised to $750,000 at the request of the San Diego Police Department.

Defense attorney Damian Lowe argued the charges did not warrant bail amounting to even half of $750,000, which he said is an amount typically reserved for serious, violent crimes.

"I would assert that $750,000 is an amount that the vast majority of people -- Mr. Draughn included -- would never be able to post" and called the amount a "de facto denial of his right to reasonable bail."

Lowe also argued that Draughn was not a flight risk, citing community ties and a fiancee who is pregnant with his child.

Lowe asked for bail to be lowered to $200,000, which he said Draughn might be able to post with the help of supporters, though he said even that amount was excessive.

Devaney said he "did not appreciate" Draughn's alleged conduct, but concurred with Lowe that $750,000 bail was high given the charges.

The next court date in Draughn's case is an Oct. 8 readiness conference, though he is not required to appear in court until his preliminary hearing, which is set for Oct. 20.

District Attorney Summer Stephan, whose office recently filed criminal charges against 20 people in connection with alleged vandalism, looting and other suspected crimes during Memorial Day weekend anti-police protests in La Mesa, issued a statement that read, "Peaceful protest is a time-honored tradition in our country, and now more than ever it's critical that we protect an individual's important First Amendment right. The majority of those protesting in our county are doing so peacefully. But when protests turn violent, it is an insult to the rightful expressions of peaceful protesters, and we must act to protect the community.

"Protesting is an inalienable right recognized by the U.S. Constitution. Rioting, burning down businesses and assaulting peace officers are crimes that will be prosecuted. As District Attorney, I will continue to fulfill my duty and responsibility to prosecute those who choose violence, looting or lawlessness to harm our community. I join community leaders in calling for unity and peace, not violence and chaos, while we work together to build racial equity and destroy hate."