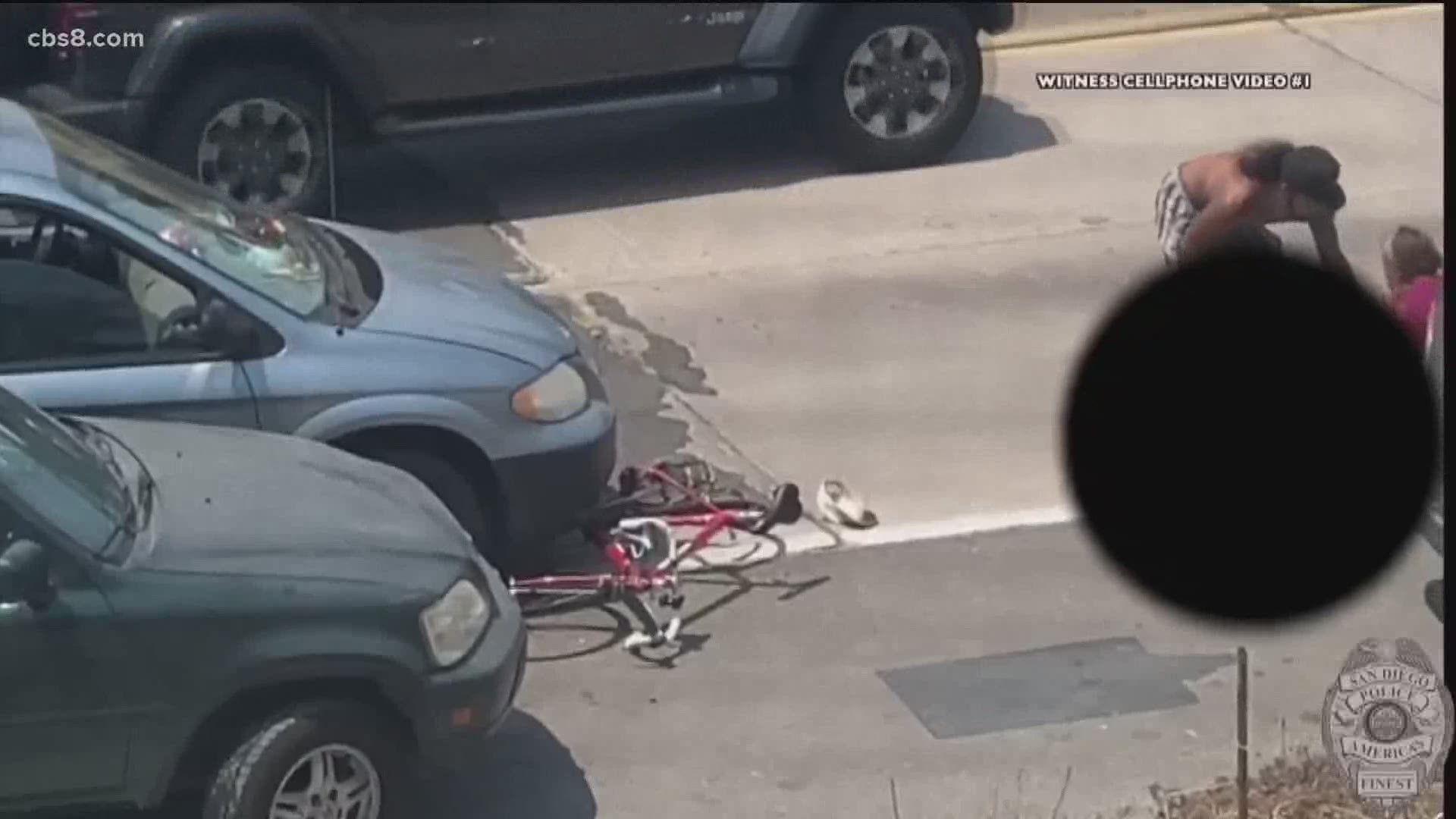 SAN DIEGO — A man who allegedly fled after the van he was driving struck and gravely injured a bicyclist near Lindbergh Field last month was in custody Wednesday after being captured outside a supermarket in Central California.

Mauricio Flores, 29, was arrested along with 50-year-old Jessica Bailey, who was allegedly riding in the 2005 Dodge Caravan when it hit the 65-year-old victim, who has been identified as San Diego resident Dan Sweeny, at India and West Washington streets in the Midtown area on the afternoon of Aug. 21, according to the San Diego Police Department.

Video footage shot by a witness shows the driver of the van, which had Georgia license plates, pulling to a stop following the collision and getting out along with a female passenger.

The pair walked over to the where injured man was lying on the side of the road. After looking at him for few moments, the driver pulled the bent bicycle out from under the front of the van and set it aside, then got back into the vehicle along with his companion and drove off.

Sweeny suffered life-threatening head trauma and remains hospitalized. Authorities said he is improving, but has a long road ahead.

“We demand justice, and we share our thoughts with the family of the victim,” said Andy Hanshaw, San Diego County bicycle Coalition.

Bike safety advocates called for justice for the cyclist as they met at Columbia and Andrews Streets, saying the bike lane symbols formerly in that location were painted over to add free street parking.

“We cannot sacrifice safety in people’s lives for parking, I’ve been advocating for safety on the street for over a decade,” said Midtown resident Belinda Appleyard.

“I’ve never felt safe either going up the hill or down the hill, we have a situation where cars are moving at 50 to 60 mph and cyclists are moving at about 3 or 4 mph,” said Brer Marsh, Bike SD Board of Directors President.

The group is calling for San Diego Mayor Faulconer and city leaders to replace the painted-over bike lane since the hit and run.

On Saturday, an off-duty Kern County California Highway Patrol officer who had seen a flyer about the hit-and-run case came across the Caravan while riding his motorcycle in Lake Isabella, an unincorporated community about 35 miles northeast of Bakersfield, CHP spokesman Robert Rodriguez said.

Suspicious due to the California government-agency license plates the beat-up vehicle now bore, the officer reported the discovery to his agency.

About 6:30 a.m. Tuesday, another CHP officer spotted the van -- now bearing Vermont plates -- in a parking lot outside a Vons store in the area and called in sheriff's deputies, who found Flores and Bailey inside the vehicle and arrested them without incident, Rodriguez said.

Wednesday morning, SDPD officers picked up the suspects for transport back to San Diego, where Flores was expected to be booked on suspicion of hit-and-run causing great bodily injury. It was not immediately clear what type of criminal charges Bailey might face. 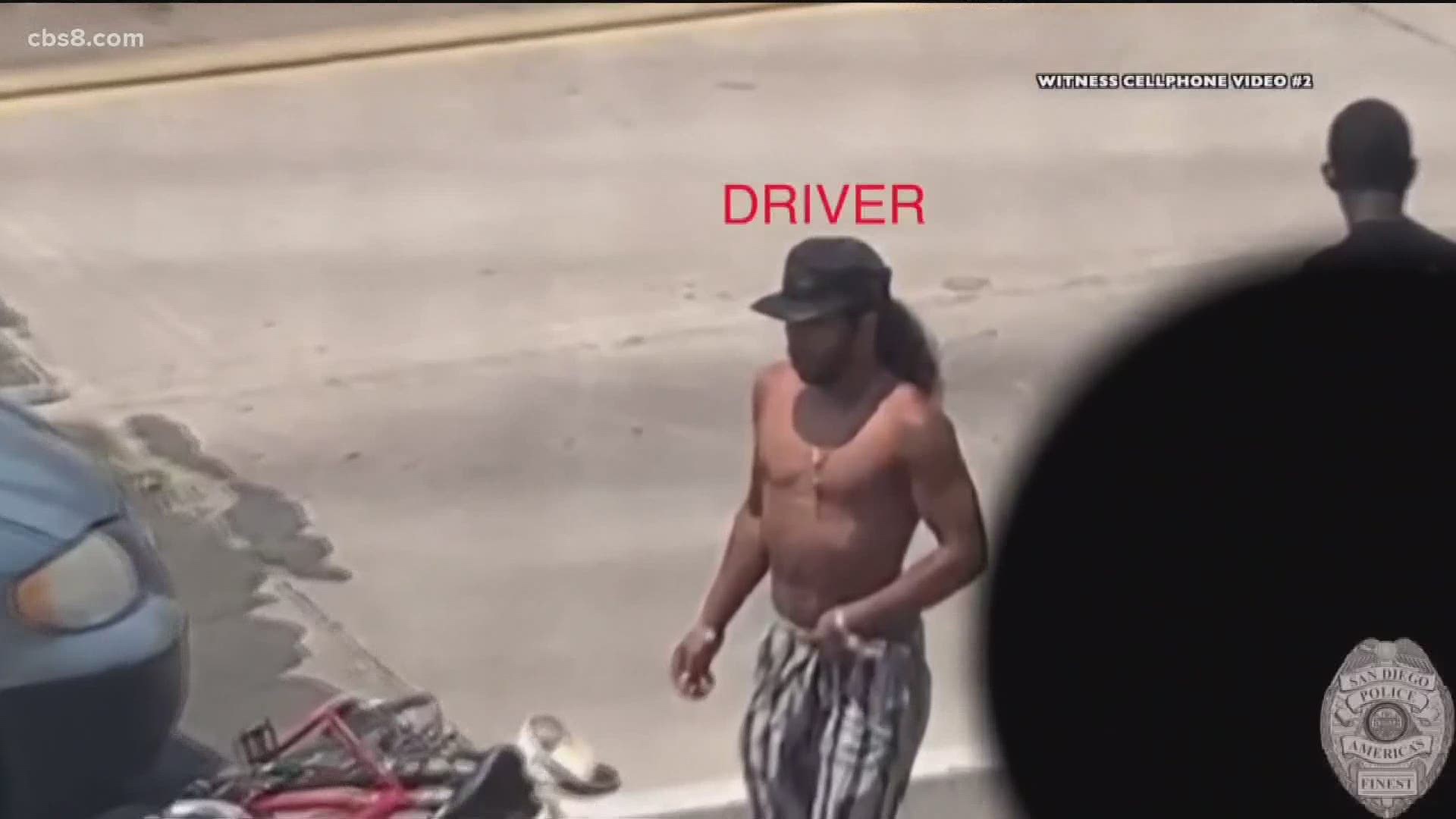