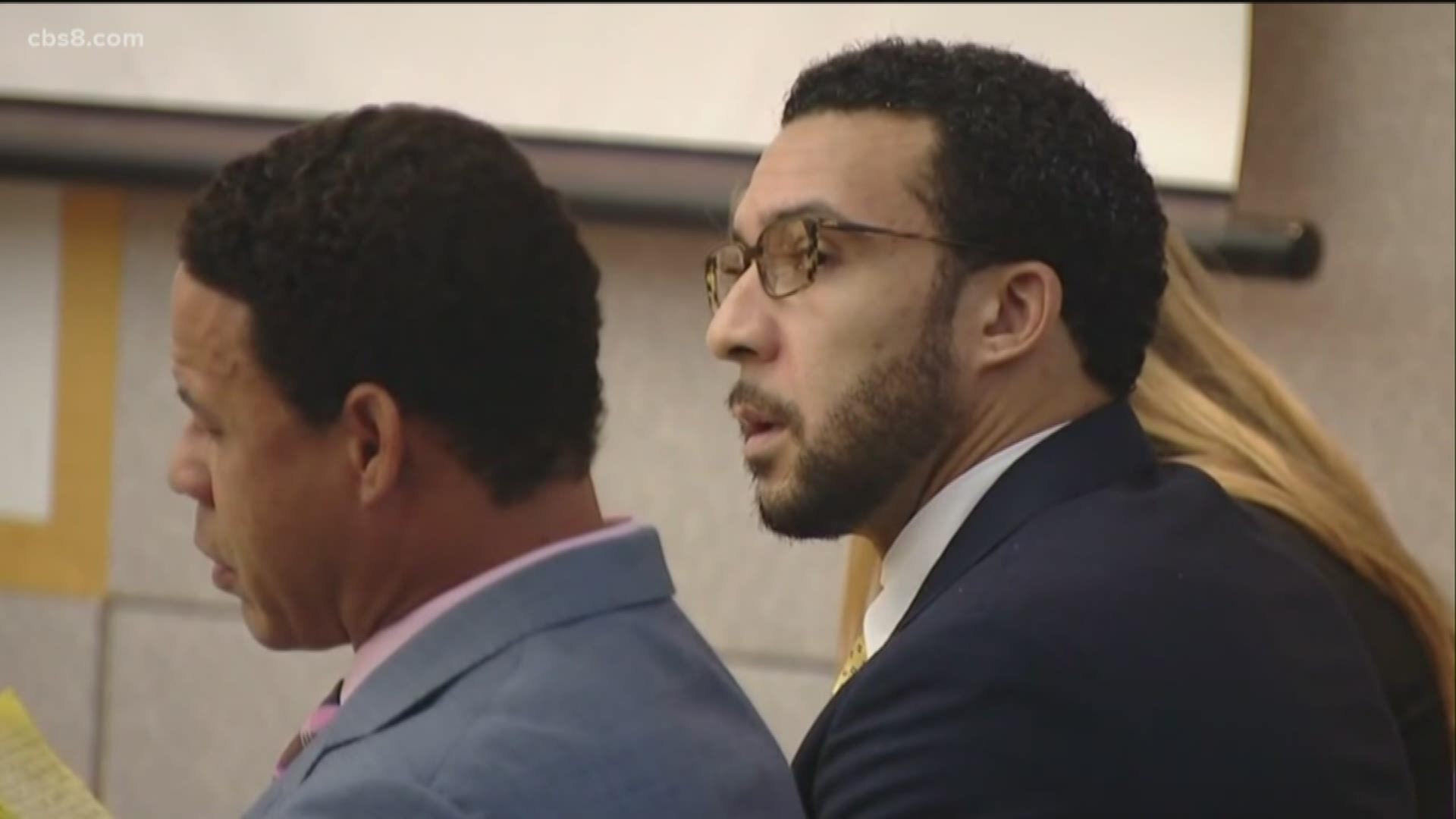 SAN DIEGO — Content Warning: The subject of this story is graphic in nature and it may be disturbing to some readers. Profanity is used in several videos below as well.

The jury returned in the trial against Kellen Winslow II – who is accused of rape, lewd conduct and indecent exposure – on Tuesday telling the judge they were hopelessly deadlocked on the remaining eight charges. After polling the jurors, the judge declared a mistrial.

A court hearing was set for 10 a.m. on Friday following the declaration. Winslow will continue being held without bail.

Attorneys on both sides held a press conference following Tuesday's proceedings. Deputy District Attorney Dan Owens said the decision to re-try Winslow on the eight charges would be considered by the Deputy Attorney's office. He said there was a "significant possibility" the office will have a decision made by Friday.

Three attorney representing Winslow - Brian Watkins, Marc Carlos, and Emily Bahr - then addressed the media saying they would continue litigating the case until their client is exonerated. They said they plan to appeal the convictions handed down Monday as well. When asked, Marc Carlos indicated the legal team stood by their decision not to put Winslow on the stand.

Both sides expressed appreciation for the jury and the time they took in deliberating the case. All twelve jurors and one alternate spoke to the attorneys following the mistrial declaration.

The count of forcible rape that Winslow was convicted of was listed as Count 4 and pertained to Jane Doe 2. The guilty count of indecent exposure - Count 6 - related to Jane Doe 3. The lewd conduct charges both stemmed from incidents with Jane Doe 5 - Counts 9 and 10 - and Winslow was found guilty of one and not guilty of the second. 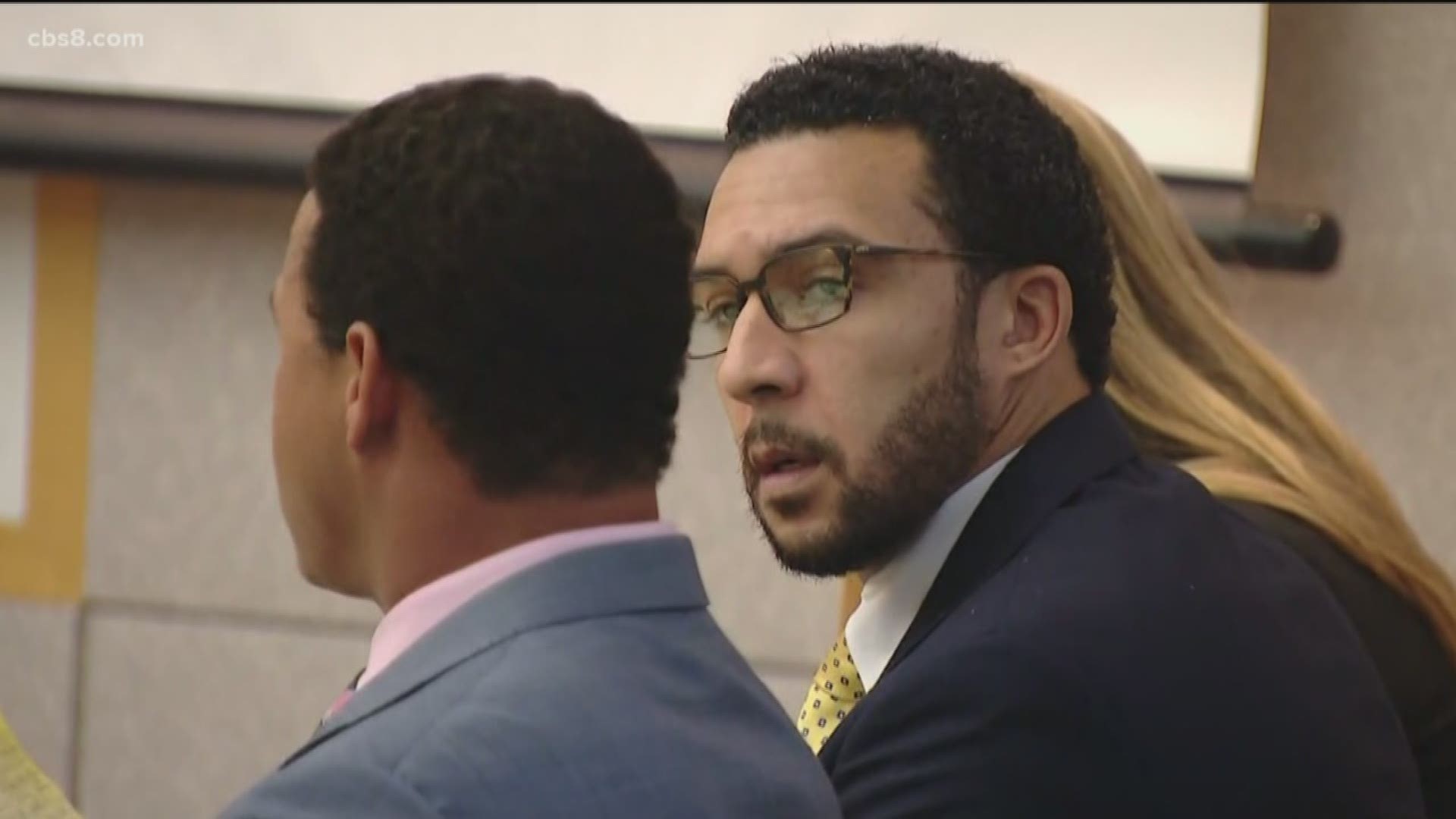 The jury returned to deliberate on the remaining eight charges following the announcement of the four verdicts on Monday but later sent a note to the judge indicating they were deadlocked. Judge Blaine Bowman called the jurors back into court and advised them to go home for the night and return at 9 a.m. Tuesday to resume deliberations. Defense attorney's for Winslow II filed a motion on Tuesday morning to have counts 1-3, 7 and 8 dismissed in light of the jury's verdict. He denied that motion before calling the jury in.

Jurors sent a note to the judge Tuesday just before 2 p.m. indicating they had reached a verdict on four of the 12 counts Winslow faced.

Jurors finished their deliberations on Friday without reaching a verdict after a court clerk finished re-reading testimony of Jane Doe 4.

In addition to the rape of Jane Doe 2, the 35-year-old San Diego native Winslow stands accused of raping another woman in 2018 and an unconscious teen in 2003. He was also charged with several misdemeanors including indecent exposure and lewd conduct related to incidents in 2018 and 2019 in which he allegedly exposed himself to women and performed lewd acts on himself in front of women in North County San Diego.

The prosecution and defense delivered their closing arguments last Tuesday, June 4, before the case was handed over to the jury. The jury deliberated for about an hour before being excused for the day.

The deliberations began after weeks of testimony from five alleged victims, friends and family of the accusers, and law enforcement. During opening statements Winslow's defense attorney refuted the claims made by prosecutors saying all the incidents in question were consensual.

In total, Winslow, who is the son of former San Diego Chargers player Kellen Winslow I - faced 12 charges including seven felonies and five misdemeanors. As of the afternoon of Monday, June 10, he had been found guilty on one felony and two misdemeanors and found not guilty of one misdemeanor.

Each of his accusers took the stand during the trial. Winslow has pleaded not guilty to all charges and faces life in prison if convicted on all.

Below is a list of the charges Winslow faces with the verdicts reached Monday, June 10:

Count 5 – Sodomy by use of force

Count 8 – Rape of an unconscious person

The allegations leveled against Winslow are detailed below with links to previous testimony.

The oldest allegation Winslow is facing is an accusation that he raped an unconscious teenager at a townhouse in the summer of 2003. Winslow, then a 19-year-old college football player, was reportedly home for the summer when he allegedly raped a then 17-year-old who he had previously had sex with at a party. She was referred to as Jane Doe 4 throughout the trial. Winslow faces charges of forcible rape and rape of an unconscious person in this allegation (counts 7 and 8).

On the stand on May 29, Jane Doe 4 testified that she had met Winslow at a graduation party in June of 2003 and that they had sex in an upstairs bedroom. She claimed that a friend of Winslow’s entered the room and that the defendant told her “he’s going to watch.” Jane Doe 4 said she objected to this, gathered her things to leave and Winslow asked, “are you going to let me finish?”

Jane Doe 4 went on to testify that she met up with Winslow again a couple weeks later at a townhouse and consumed two or three beers. She said the next thing she remembers is waking up and finding Winslow penetrating her from behind, pushing her head toward his friend "Matt's" groin area. She said she was devastated by this and said she kept saying “no, no, no.”

In addition to Jane Doe 4’s testimony, jurors heard from an ex-boyfriend of Jane Doe 4 and her husband. Jane Doe 4 came forward with her accusation after hearing about the other allegations being leveled against Winslow for rape, indecent exposure and lewd conduct.

The first allegation of rape made against Winslow was by a 54-year-old woman referred to in the trial as Jane Doe 1. She has accused Winslow of raping her in his vehicle on March 17, 2018. He is charged with forcible rape and oral copulation and is also facing a charge of felony kidnapping related to the alleged assault (counts 1-3).

On May 21, Jane Doe 1, was the first of the five accusers to take the stand. The female hitchhiker accused Winslow of raping her after he picked her up in March 2018. She said she did not flee or defend herself because the muscular athlete had threatened to kill her. A friend of Jane Doe 1 and Jane Doe 1’s daughter also testified during the trial.

Winslow's attorneys have claimed the two had consensual sex and suggested Jane Doe 1 had a drinking problem. They said she has given inconsistent statements and lied to the jury about being sober for 30 years, pointing out that she has been arrested 11 times for public intoxication.

Winslow is also accused of raping a 59-year-old woman - referred to as Jane Doe 2 during the trial - on May 13, 2018. He faces charges of forcible rape and sodomy by use of force related to this allegation (counts 4 and 5).

Jane Doe 2 took the stand May 22 to testify about Winslow allegedly raping her on Mother's Day in 2018.  On the stand, the woman said she told Winslow repeatedly, "please don't do this." She described being in pain as Winslow raped her from behind and said that when she screamed, he put his hands around her throat making it hard to breath.

She said she believed it would be her "last night."

In addition to the rape charges, Winslow is also facing accusations of indecent exposure and lewd conduct related to incidents in 2018 and 2019.

A 57-year-old woman – referred to as Jane Doe 3 - has accused Winslow of exposing his penis to her in front of her home while she was gardening on May 24, 2018. He is facing a charge of indecent exposure related to this incident (count 6).

The most recent allegations Winslow faces stem from incidents that reportedly occurred while he was out on bail awaiting trial on other charges. A 77-year-old woman referred to as Jane Doe 5 during the trial alleges that Winslow rubbed his penis through his shorts while looking at her and sitting on a workout machine opposite the woman at a Carlsbad gym on Feb. 13 of this year. He is charged with lewd conduct related to that allegation (count 9).

On the stand May 30, Jane Doe 5 also testified about another encounter with Winslow a few weeks after the first incident. She said on Feb. 22 the defendant joined her in the gym hot tub and she believes he masturbated while sitting near her. He faces charges of lewd conduct, willful cruelty to elder, and battery against elder or dependent adult related to Jane Doe’s second allegation (counts 10 – 12).

Jane Doe 5’s husband – referred to as Robert C. - and two gym employees of Crunch Fitness in Carlsbad also testified during the trial.