None of the victims were publicly identified pending notification of their families.

ORANGE, Calif. — A gunman who carried out a deadly rampage inside an office complex in Orange, killing four people including a 9-year-old boy, was acquainted either personally or professionally with the victims and specifically targeted the real estate services company, police said Thursday.

The suspect, identified by police as 44-year-old Aminadab Gaxiola Gonzalez, was shot by police in the courtyard of the building at 202 W. Lincoln Ave., which housed Unified Homes, a mobile home dealer and real estate service, according to Orange Police Department Lt. Jennifer Amat.

The first of multiple 911 calls came in seconds before 5:35 p.m., Amat said. The caller said a man was shooting into a business from across the street, she said. The first officers arrived on scene at 5:36 p.m.

"It is our understanding the suspect was firing toward officers," Amat said at an afternoon briefing.

A sergeant who responded to the scene had bolt cutters in the squad car that officers used to lop off the locks, she said.

Police were already in the area and were able to respond immediately to the 911 calls of shots fired, said incoming Police Chief Dan Adams, who will take over for Tom Kisela, who is retiring on July 3.

After officers gained access to the courtyard, they tended to the wounded suspect and a woman who had been shot, both of whom were hospitalized in critical but stable condition. A 9-year-old boy, believed to be the woman's son, was found dead in the courtyard. According to District Attorney Todd Spitzer, the child died in his wounded mother's arms.

None of the victims were publicly identified pending notification of their families.

Lt. Amat provided an update just after 10 p.m. on Wednesday: 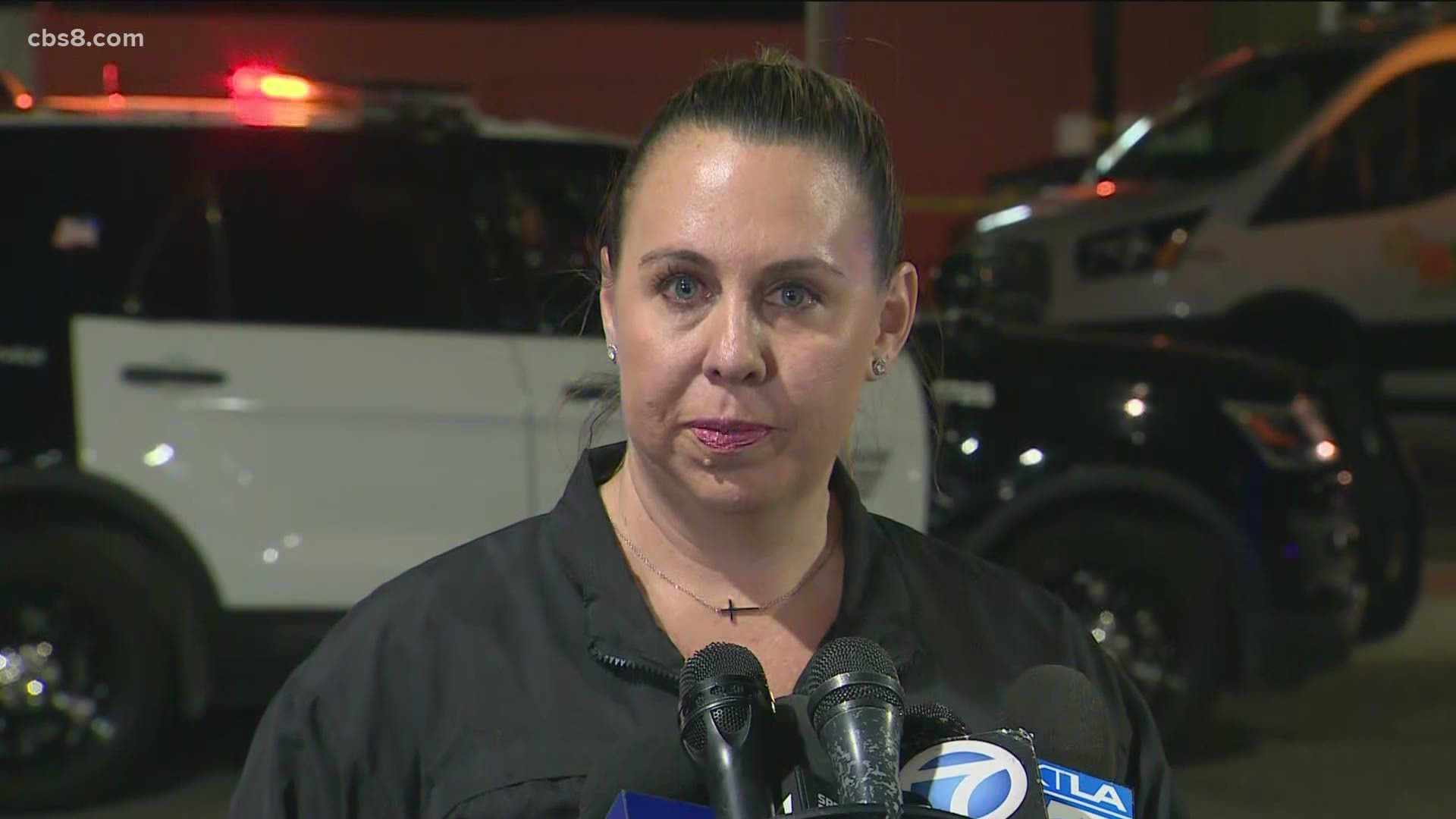 Officers recovered a semi-automatic handgun inside the complex, along with a backpack containing pepper spray, handcuffs and ammunition believed to belong to the suspect, Amat said.

Gonzalez, whose last known address was in Fullerton, had recently been living out of a motel room in Anaheim, Amat said.

Other details on Gonzalez's background were not provided, but Amat said the "preliminary motive is believed to be related to a business and personal relationship which existed between the suspect and all of the victims."

At a late morning news conference, Spitzer said: "It's not really a good morning even though it's beautiful outside. This is child abuse prevention month and it appears a little boy died in his mother's arms as she was trying to save him during this horrific massacre."

He said the suspect "made the decision to use deadly force" to resolve dispute and "he will suffer and face the consequences." He said he will consider filing a death penalty case against the suspect.

According to Orange County Superior Court records, the suspect, listed as Aminadab Gaxiola, was charged in April 2015 with misdemeanor courts of child abuse and endangerment, assault with a deadly weapon, dissuading a witness from reporting a crime and battery in a case in which he allegedly assaulted a boy in his care or custody with an umbrella on March 31, 2015, in Anaheim.

The child abuse, assault with a deadly weapon and dissuading a witness counts were dismissed on Nov. 30, 2015, and the battery charge was dismissed on Sept. 26, 2017, because of a law that allows for the expunging of convictions if a defendant clears probation successfully.

The shooting drew a heavy law enforcement presence with more than a dozen police cars and a SWAT vehicle at the building, including fire engines from multiple fire departments. The FBI and Bureau of Alcohol, Tobacco and Firearms also sent agents to the scene, as did the District Attorney's Office.

Amat said the city had not seen such violence since 1997, when five people were killed and two others wounded when a state employee opened fire at the Caltrans facility near Batavia Street and Taft Avenue. Arturo Reyes Torres, 41, of Huntington Beach, was shot and killed by police a short distance away from the maintenance yard.

Kisela, who worked that case, said it was "just as horrific and challenging" whether the mass killing happened at the beginning of his tenure or when he was about to retire.

"Our hearts are with the families impacted by this terrible tragedy," Newsom tweeted.

Rep. Katie Porter, D-Irvine, said Wednesday night that she was "deeply saddened by reports of a mass shooting in Orange County, and I'm continuing to keep victims and their loved ones in my thoughts."

Sen. Dianne Feinstein said, "Here we are again: another mass shooting, more lives needlessly lost and a feeling of outrage that these massacres happen over and over again. Even more heartbreaking, last night's shooting in Orange left a child among the dead. My heart goes out to the victims and their families, but I feel angry as well. Angry that there are so many guns in this country, angry that it's so easy for anyone to purchase these deadly weapons and angry that Democrats in Congress for years have been blocked from enacting gun-safety laws that could save lives."

"There are bills ready to go that mandate universal background checks, ban high-capacity ammunition magazines, prohibit the sale of military- style assault weapons and raise the age to buy an assault rifle," Feinstein said. "Each of these bills deserves to be debated and voted on. We must act or we'll keep seeing these bloody massacres and witness more and more bodies pile up."

Rep. Lou Correa, D-Santa Ana, issued a statement saying he was "devastated by the news that a child and three others died in a mass shooting in Orange. We must all condemn this unspeakable act of violence. ... However, this shooting did not take place in a vacuum. In the past month, our nation has seen 20 mass shootings. Communities all across the country are experiencing the same pain and devastation that we feel today. I mourn for those lost last night and throughout the United States. This violence must end."

It was the third mass casualty shooting since March 16, when a gunman shot and killed eight people, six of them women of Asian descent, at three spas in the Atlanta area. Six days later, a man shot and killed 10 people at a grocery store in Boulder, Colorado.