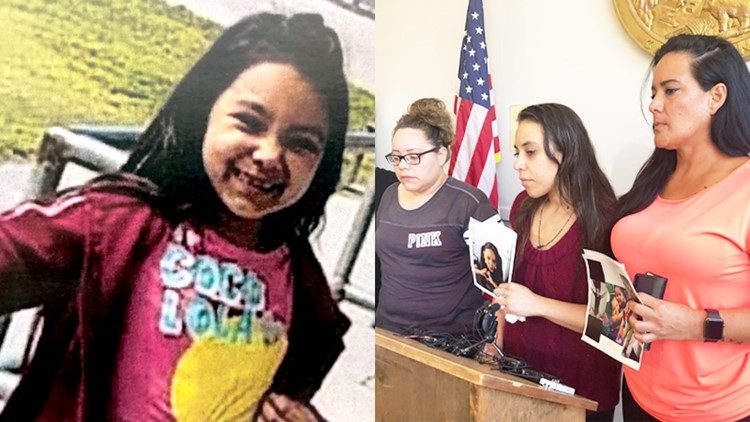 SAN DIEGO — Content warning: This story includes details that may be disturbing to some readers.

A man accused of stabbing his young daughter to death plead not guilty in a Vista court Tuesday. 27-year-old Pedro Araujo was arrested last week after police found the body of his 7-year-old daughter Mariah Araujo in her family’s Oceanside home.

At Tuesday’s hearing, Deputy District Attorney Ryan Saunders said that Mariah resided with her father, her 6-year-old sister, her grandmother and other family members. He stated that on July 31 the grandmother arrived home to find Pedro Araujo covered in blood and saw blood in the home’s master bathroom. The grandmother then took the 6-year-old out of the home and called 911.

Saunders also asserted that Mariah’s 6-year-old sister was in an adjacent room when she was killed. He said Mariah had been stabbed approximately 10 times including four times in the neck.

RELATED: Man accused of killing 7-year-old daughter to be arraigned Tuesday after not appearing Monday

RELATED: Oceanside father charged with the murder of his 7-year-old daughter

Following the hearing, Mariah’s mother Vivian Arzola spoke to reporters describing her daughter as a “smart” and “outgoing” girl who liked dolls and dancing. Vivian said she had a hard time looking at Pedro in court.

“It’s not fair that he took my daughter away from me,” Vivian said. “I want justice for Marah.”

Pedro Araujo did not speak in court, but his public defender entered a not guilty plea on his behalf. In addition to murder, the defendant is charged with assault on a child in regard to Mariah, and misdemeanor child cruelty involving her 6-year-old sister, Viviana.

Court records show he is on probation for previous convictions of DUI, driving without proof of insurance, property vandalism, petty theft and possession of a controlled substance.

Araujo faces 26 years to life in prison if convicted. He is being held with no bail.

A readiness conference was scheduled for Aug. 14.

The victim’s six-year-old sister has been taken into protective custody and remains at the San Diego County Polinsky Children’s Center in Kearny Mesa, according to family members.

A North County juvenile court date has been set for August 26 to address the child’s placement.

A GoFundMe page has been established to help Mariah’s family pay for her funeral services and to provide “clothing and school supplies” for her surviving 6-year-old sister.

Editor's note: A previous version of this story indicated that charges were added after Araujo's arrest for murder, those are in fact older charges. We have updated this article and we regret the error.