The lawsuit lists several complaints against the city of La Mesa and Officer Matt Dages including arrest without probable cause, violence because of race, and more 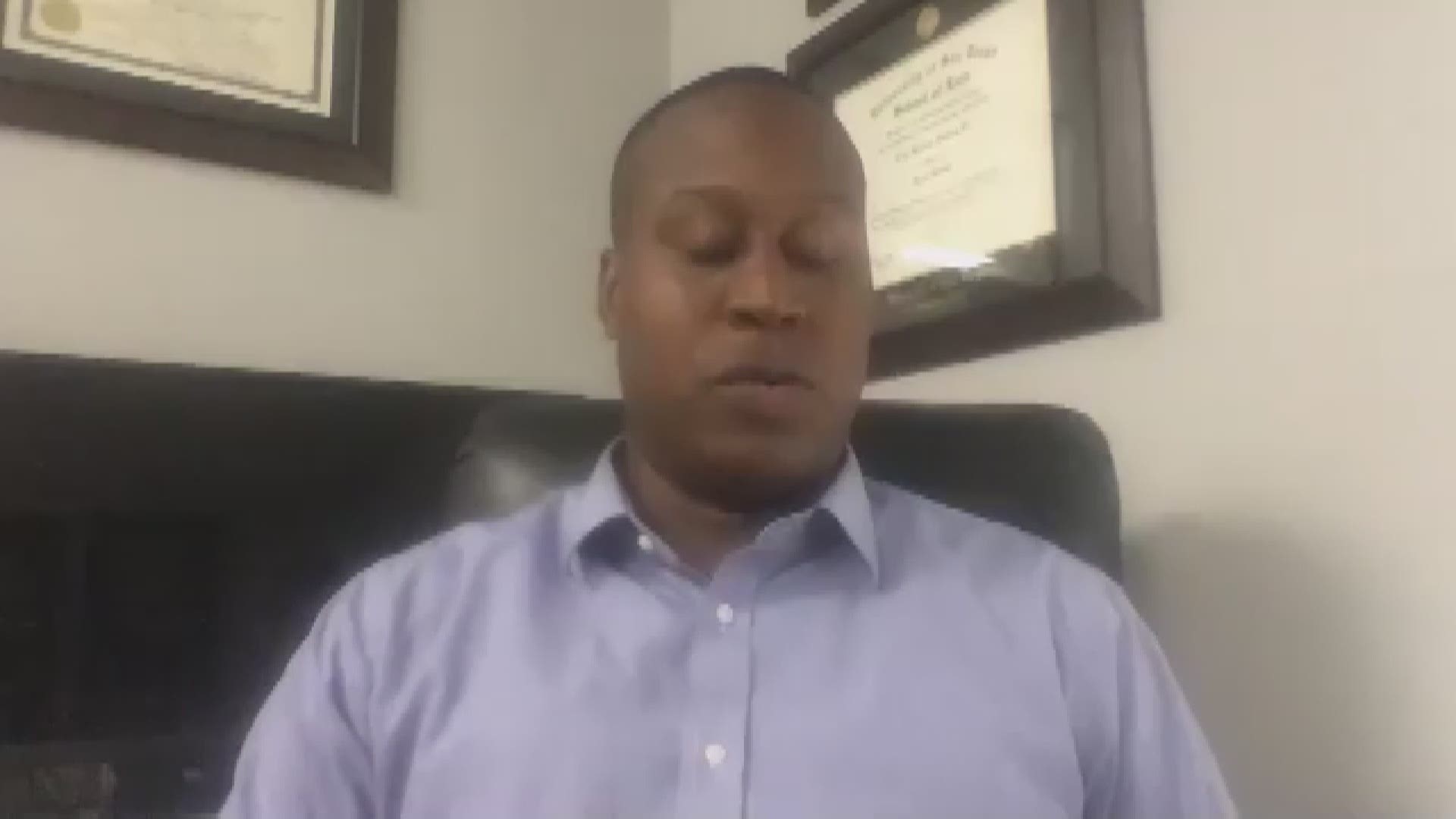 LA MESA, Calif. — Editor's note: A previous version of this story incorrectly indicated that the lawsuit includes the La Mesa Police Department. It has been corrected and we regret the error.

A man who was arrested in La Mesa in May and later had all charges against him dropped has filed a lawsuit against the City of La Mesa and the arresting officer with the La Mesa Police Department. Amaurie Johnson's arrest was widely publicized when video circulated on social media showing the confrontation between the 23-year-old Black man and a white officer with LMPD identified in court documents as Matt Dages. Johnson's controversial arrest was followed by demonstrations in the City of La Mesa with protestors speaking out against police use of force on Black citizens.

In the lawsuit, released to News 8 by Johnson's lawyer Troy Owens, several complaints are listed including arrest without probable cause, excessive force and violence because of race.

It also alleges the City of La Mesa is negligent and created an "atmosphere of lawlessness and discrimination, encouraging excessive force by its officers" due to alleged failure to discipline officers or investigate citizen complaints of excessive force.

The La Mesa Police Department released multiple videos from the incident the week after the arrest and eventually dropped all charges against Johnson.

“We’ve made a lot of progress in this state, but my gosh, I was reminded again even this morning, an incident down in San Diego, a young man on a bench,” Newsom said.

Owens said Johnson is frustrated with the lack of "any accountability or any of the transparency that we were promised" in regards to the city's independent investigation into the incident.

According to the complaint, on the afternoon of May 27, Johnson was standing outside a luxury apartment complex called "The District" in La Mesa waiting for friends who were set to return from a store. It alleges that Officer Matt Dages and other LMPD officers were performing enforcement at the nearby trolley station when Dages crossed the street to approach Johnson.

Dages then allegedly asked Johnson if he was smoking marijuana which Johnson said he was not. Officer Dages told Johnson he did not believe him and "ordered him to get his friends on the phone," according to court documents, which Johnson complied with.

Johnson's friends then pulled up to the scene in their car and Johnson attempted to walk away and end his interaction with the officer, according to the complaint.

It also alleges that Dages grabbed Johnson by his jersey and held him in place, violently grabbed his arm, "forcefully jerked his body" and aggressively pushed Johnson into a seated position using an arm-bar to keep control of him.

"I have no reason to be detained by you," Johnson could be heard saying to the officer in video of the incident that was widely circulated online.

According to the lawsuit and as was seen on video of the incident, several other La Mesa police officers arrived at the scene during the confrontation.

"He just came over to hang out. Why are you guys harassing him?" asked Henry Liengthe, one of the men taking video that day.

Officer Dages claimed that Johnson "smacked" him which Johnson denied and reminded the officer that bystanders were recording the incident.

Johnson was arrested and driven to the La Mesa Police Department where he was issued with a citation for Assault on a Peace Officer and restricting/obstructing/delaying a Peace Officer.

The lawsuit also alleges that while LMPD Chief Walt Vasquez issued a statement on June 3 at a press conference saying Johnson had been contacted for smoking at the trolley platform area, he was never found to be doing so in that area.

It goes on to say that Johnson did not have any smoking paraphernalia on his person at the time of his arrest.

On June 5, it was announced that LMPD would not seek prosecution of Johnson.

Owens said that Johnson has not received an apology from the city or police department regarding the incident. He said the City of La Mesa has used third party people to reach out to Johnson and offer a private sit down with Officer Dages.

"Amaurie [Johnson] is not interested in anything private," Owens said. "He was publicly humiliated. He was publicly arrested and so any statements or apologies or anything - that needs to happen publicly from the City of La Mesa."

Owens said his client is seeking a formal response as opposed to "an informal sweeping this incident under the rug."

Through the lawsuit. Johnson is seeking transparency and to improve relations between minorities and law enforcement, according to Owens.

The City of La Mesa has not issued a response to the suit. The La Mesa Police Department has not commented on Officer Dages's current standing with the department.

While at the time of Johnson's arrest, police protests had already gotten underway across the nation due to the Memorial Day in-custody death of George Floyd in Minneapolis, Johnson's arrest may have been the catalyst for a May 30 anti-police brutality demonstration outside La Mesa City Hall.

During the protest, 59-year-old Leslie Furcron suffered severe injuries when she was struck in the forehead with a beanbag round fired by La Mesa Detective Eric Knudson, intensifying public condemnation of the city and its police department.

According to La Mesa police, officer-worn camera footage captured images of Furcron hurling something across the parking lot at sheriff's deputies just before Knudson discharged the beanbag round.

Furcron and her family also filed a claim against the city of La Mesa, as did other protesters who allege they were injured by police that day.

A copy of Johnson's full complaint can be found below: